The Devil On The Beat

The new anti-terrorism act is a by word for abuse, especially in Jharkhand. Remember TADA? 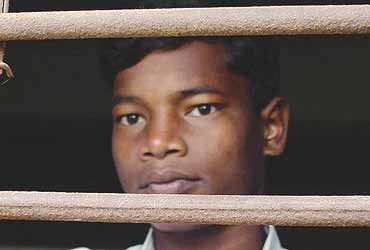 outlookindia.com
-0001-11-30T00:00:00+0553
Coming against the backdrop of the many cases of abuse under TADA, the numerous arbitrary arrests of innocents under the new terrorism legislation—the Prevention of Terrorism Act (POTA)—is cause for serious concern. There are just too many alarming stories coming in from different corners of the country. So, is POTA going the notorious TADA way?

The Centre too has been forced to change tack. Deputy PM L.K. Advani has named Arun Saharya, retired judge of the Punjab and Haryana high court, to head a review panel. It, he told Parliament, would ensure that POTA provisions are invoked for combating terrorism, "not used against ordinary criminals or those who are not terrorists or whose acts can't be considered terrorist acts".

The use of POTA in the last one year, especially in Jharkhand, has raised many questions. The National Human Rights Commission (nhrc) had to issue notices on its misuse to the state government. Since it was first promulgated as ordinance in October 2001 (it became an Act six months later), rights activists and ngos say that POTA is being used by the police here to target political opponents and Naxalite "sympathisers".

Jharkhand has the worst record among the states—with around 3,200 cases registered. "In Jharkhand, the law of the land has been replaced by POTA with the tribals being singled out," says Shashi Bhushan Pathak of the People's Union of Civil Liberties (PUCL). Even state home commissioner J.B. Dubit admits that "anyone caught providing information to Naxal groups can be booked under POTA. It doesn't matter if it's a child or an old man."

The arrest last month of 12-year-old Gaya Singh and 81-year-old Rajnath Mahto brought this into focus. The Jharkhand government has now been forced to review the case of 83 of the 202 persons arrested till date. "The government will look at these cases closely and see if the law has been misused," says chief secretary G. Krishnan.

Meanwhile, an independent fact-finding team has thrown up some startling facts. The team looked into cases in nine districts including Garwha, Palamu, Latehar, Gumla and Hazaribagh from January 29 to February 3 this year. It found indiscriminate use of POTA against illiterate tribals as an "intimidating tool", to wean people away from opposition parties like the jmm and the rjd. Also, the social profile of those arrested reveals that a majority are farmers, students and daily-wagers, a pattern typical of the TADA days.

For instance, Vinod Singh, 13, and three friends were arrested from Mardang village in Latehar while grazing cattle. The charge: MCC links. Anguished father Pranam says, "Vinod doesn't even know what the MCC is." Another case was of young Janki Bhuiya who was arrested as they couldn't nab his MCC activist father. ngo activist Father Stan Samy says, "About 60 minor children have been arrested under POTA. The government has been brutal."

Several cases of minor girls being picked up and charged under POTA have also come to light. Mayanti Kumari, 16, of Jharno village in Gumla, was on her way to school when she was arrested. Similarly, Seema Kumari, 15, of Bishnupur village, and her friends, Roshani, 17, and Silu Devi, 19, were charged with spying and feeding MCC members.

Such cases of misuse abound here. Sushil Prakash Bhasin, a Daltonganj lawyer, was arrested in June 2002 after two revolvers were 'recovered' from his house. Hotel owner Bansidhar Sahu was arrested in Gumla on the charge of giving tea to MCC men. Narendra Sharma, a reporter of Hindi daily Hindustan, was picked up in Palamu. "He was only covering the activities of the banned organisations," says a rights activist.

The fact-finding team has asked for special designated courts in Gumla and Palamu districts which account for the highest number of cases.As of now, they are in Ranchi and Dumka. Chief minister Babulal Marandi, who lost a cut motion last Thursday, shied away from a direct statement. He told Outlook, "We're examining reports on POTA misuse. If we find violations, action will be taken against the guilty."

Allegations of POTA misuse have also been coming in from Andhra Pradesh, Maharashtra and Gujarat. The arrest of poet A.K. Babu, better known as Riveria, in Ongole, AP, saw many protests. "His only offence is he penned a poem on POTA and another on the killing of a pwg activist," says a lawyer. This follows arrests of a tailor and a doctor in Khammam, for allegedly stitching clothes and treating Naxalite patients.

A celebrated case of arrest under poto was of Mohammed Afroz. The Mumbai police first claimed he was an Al Qaeda suicide bomber but had to drop charges later for lack of evidence. Public prosecutor Madhukar Raut is on record saying: "I was not consulted before the police booked Afroz under poto."

Home ministry figures show that of the 77,571 people detained under TADA, 72,000 were let off due to lack of evidence. When it lapsed in May '95, the conviction rate was less than 1 per cent. This month, the apex court is hearing a petition challenging POTA's constitutionality. If the judgement favours the petitioners, then POTA may also go into extinction—but after leaving a trail of bad faith and bad blood behind.