A slice of any and every person’s life, how we face the everyday matters as also the unexpected, life-altering ones. 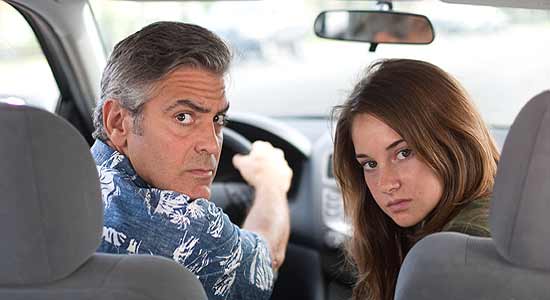 The Descendants is a slice of any and every person’s life, how we face the everyday matters as also the unexpected, life-altering ones. Matt King (Clooney) is a regular bloke, a lawyer in Hawaii with a wife and two daughters. He is also the sole trustee of a family trust that controls acres of untouched land on the island of Kaua’i that the folks have decided to sell to a developer. Then one fine day, Matt’s wife meets with a water-skiing accident and goes into coma.

That’s when we enter the film. It’s about how Matt faces the tragedy. He also has to deal with 10-year-old Scottie’s (Miller) inappropriate behaviour and 17-year-old Alex’s (Woodley) wayward ways. It wakes him up to these relationships he’d been neglecting and he’s pushed into becoming an “understudy” parent to the two. More than the human loss, the film is about squaring up to the sudden, unforeseen betrayals in life, a journey on which dad and daughters set out together.

The film brings alive the struggles within. Payne lets the narrative flow calmly, in a mellow, meditative way: the initial pain and denial, the resistance, fights and vengeance making way for an acceptance of grief and reconciliation with the many treacheries of life. Matt and the girls learn to live with their predicaments and the film then is a progression towards finding catharsis and healing.

The mainstay are the characters and their compulsions wonderfully brought alive by the ensemble. Clooney reaches out with his portrayal of Matt, getting the nuances down to the slump and that downbeat, clumsy body lingo. From being sure he’ll be close to his wife again to the heart-breaking realisation that she will never be the way she was. And then crying by the wayside, alone, on realising that their relationship was just a deception, that they were living a lie. There are several scenes that tug strong at heart-strings. More than even Clooney, though, it’s Amara and Shailene, who come up with poignant performances, that ensure that the lump stays in your throat long after the film is over. Another revelation is Nick who plays Alex’s boyfriend Sid, an unlikeable youngster with hidden depths to plumbed.

There are sequences where it does become cloying. The long, never-ending voice-over feels cheesy especially at the start with all the sugary faff about life in Hawai being a “permanent vacation” on the “surfboard of life”. And later, where the family members are likened to an archipelago—islands that are part of a whole yet “drifting apart”. Still, overall the impact lingers on.

It is often said that every “normal” family is dysfunctional. But what The Descendants underscores beautifully is that every dysfunctional family has a compassionate and benevolent core; that after every turbulence, people do find peace, curl up on the couch, eat ice-cream, share a blanket and watch TV together.