The gateway to tragedy; Designs on winter; Uniform appetite; It runs in the family; Art of devotion; Fashion adda; Market watch 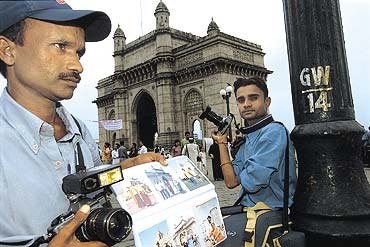 outlookindia.com
-0001-11-30T00:00:00+0553
The Gateway To Tragedy
The media-savvy Kamakhya Choudhry, a tourist photographer at the Gateway of India, is an unlikely practitioner of the cult idiom from the popular teenage movie Dead Poets Society: Carpe Diem, or Seize the Day. But Choudhry, who was looking out for honeymooning couples and families on holiday, found himself some dead-serious business—just feet away. He and other tourist photographers clicked the first frames of the bloody aftermath of the August 25 blast, including a poignant one of a father carrying his injured child in his arms and one of a group of tourists from north Gujarat, sitting in all white, splattered with blood.

"We were crying as we were clicking photographs. People we knew were lying dead," says Mohan Jhala, another photographer who continued to take pictures even after he was hit by shrapnel. Says S.P. Singh, another tourist photographer who took photos of the scene: "At first we were paralysed by fear. We didn’t know what to do." But they egged each other on to take some of the rawest, most memorable photos of the scene. "I felt this was my moment. If I didn’t take photos now, when would I take them," Jhala recalls.

Over the next few days, their photographs appeared in several newspapers and magazines across the country and abroad, in publications whose names they can barely pronounce. Choudhry, who has made a little industry of describing what happened to media crews, says helplessly: "Who all could I refuse? I would have been happier if I had saved some people’s lives."

But for these photographers, the highlight of whose careers as unattached lensmen so far had been assignments covering Christmas carnivals and parties at suburban discos, are now feeling the satisfactioin of seeing their work in the papers. "I left home many years ago, but now people are calling me up from Assam saying they saw my photographs and liked them," says Choudhry, who exudes the kind of smoothness tourist photographers need as a stock-in-trade.

Choudhry, who also has an event photography outfit called KK&Group, has now got a job with city eveninger, Afternoon. Incidentally, Iqbal Sheikh, another photographer at the Gateway of India, was among those killed in the blast.

A City In Daze