Three colours of politics; House of Djinns; The Savoy, anyone? Hills of light; Amar Akbar Anthony; Crust fallen, and risen 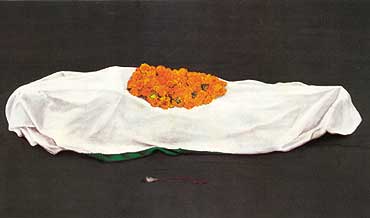 outlookindia.com
-0001-11-30T00:00:00+0553
Three Colours of Politics
Socialite evenings can have eerie underpinnings. Take this Independence Day, the time for patriotism-at-high-tide. India’s flagman par prominence, industrialist Naveen Jindal, and his wife Shallu had invited over 300 of the capital’s fervent partygoers: a few ministers, including information and broadcasting minister Ravi Shankar Prasad, sundry bureaucrats and industrialists, the regular P3 fodder and a few photogenic/telegenic artists for the opening of their show—Tiranga: Rights And Responsibilities—at the Visual Arts Gallery in the India Habitat Centre.

Amidst this blinding glitter, few spared more than a cursory glance at what adorned the walls. Had some of them looked closer, the broad smiles may have narrowed a bit. For here, cogently curated by Peter Nagy, was a thought-provoking assemblage of works by 14 artists and photographers on their reflections on the tricolour: on what it was initially meant to signify and what it has become. 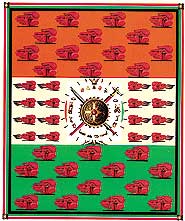 These are pained musings on what we have done with our hard-won freedom: grabbing the rights and abdicating the responsibilities that came with it. The artists had put their paint where their mouths were, making obvious political statements that Indian artists rarely do. The general lament seemed to be over communal violence.

Amongst the more stark images was Gargi Raina’s painting, Gory, Glory. A white sheet draped over what appears to be a body, with a bit of green showing at the bottom and a bunch of marigold placed on the middle of the "corpse".

And among the more telling statements was Sudhir Patwardhan’s grief for the way we see colour. "It is becoming difficult to perceive saffron and green without thinking of their communal reference. And between them is the white, a buffer. Or a meeting ground? What role will white play?" Hopefully, for communal harmony, and at a time when it is needed the most. 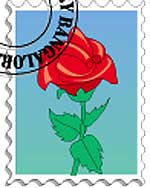