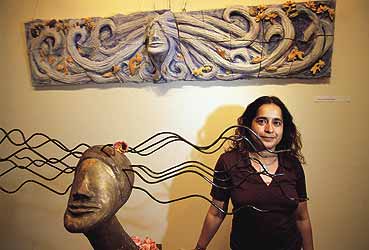 outlookindia.com
-0001-11-30T00:00:00+0553
A Carib-Clay Chandi
A herd of clay water buffaloes made for bizarre horned-and-hooved mascots at Annu Ratta’s mixed media show, Dreamweaver’s World that opened recently at the India Habitat Centre. A mixed media show by Ratta, a developmental economist and freewheeling artist trained in stone, metal and claywork, the theme was yin-universality. A feminist artistic collective, Ratta’s Dreamweaver’s World symbolically depicted the yearning of women with attenuated necks. Weaving together these coloured skeins of her politics and art she colours canvases, chisels stone and creates a quirky new artform—giant stitched murals. Emboidered panels that show her defying the convented mindsets of strait-laced nuns.

The sheer scale of her satin-stiched wall hangings mock all the hidden truth about needlework classes—that the four corners of handkerchiefs are suitable boundaries for a young girl. Thumbing her nose at such thimble-sized definitions, Ratta’s global influence include the colours of the Carnival and the dance of light in the Caribbean. All these inspired her murals in ceramic, Blue Dreams, Maya’s Dreams of Flying and Green Girls.

Her childhood in Chandigarh comes alive with silk threads, reels and glass bangles in her chromatic collections Red, Yellow and Orange Brown. While in the Truth Temple, an installation work, she asks us to take a hard look at the economic realities of objects we worship—from cars and cellphones, Pepsi bottles, pokka pundits and dollar notes. It’s this Chandni Chowk kitschy kingdom that dominates in Ratta’s Dreamweaver’s World which invites thinking viewers to come and visit. For those who did stop by, most agreed that Ratta’s artful journey from Chandigarh to the Caribbean should be a travel to more Indian cities.