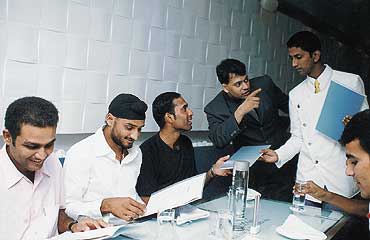 If you don’t have reservations, you’d be a liberal anywhere else. But at Tendulkar’s, you’d be hungry. On a Monday evening it’s not difficult to find a table at the restaurant. "It’s impossible," says Clement gravely. He is at the front desk but as Billy Joel sings in the background, ‘There is some place he would rather be’. The place is packed, with both the young and the old. There is an all-pervading tinge of blue as though it is all a Pepsi conspiracy. We’re led to a table near which a boy is perilously shoving a cake into his girl’s mouth. Suddenly some waiters stand around them and sing, "Someone here is getting old..." (She still smiles).

Our starter, Bombil fry, a creation of Sachin’s mother, comes at Rs 200 which seems reasonable on the menu but not when it translates into three lean pieces. The Goan prawn curry and steam rice are no bigger a ration. But the food is superlative. An outing with a benign, thin girl who doesn’t eat much will come to around Rs 1,000, without drinks. A beer is around Rs 250 and a small vodka the same....