The Amla brothers drop anchor in Delhi; Sachin on a different pitch; Delhi's latest hangout and The latest from Tarla Dalal's cook-book factory. 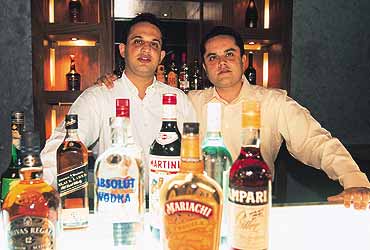 outlookindia.com
-0001-11-30T00:00:00+0553
In Fine Spirits
hey’re the names behind the popular Srinagar hotel, The Broadway. Now brothers Amit and Arjun Amla—directors, Broadway Enterprises—are launching a bar and two new restaurants in Delhi’s Ashoka Hotel. The properties have been taken on lease for 10 years following the government’s decision to disinvest the hotel’s food and beverage outlets.

"It’s a good opportunity to set up base outside Kashmir," says Arjun. First off the block is the bar, Ssteel. "It’s nothing like you’d have seen before," says Amit. Looks-wise, it resembles an alleyway between two old buildings or an old warehouse with high ceilings, unpolished stone floor, charred bricks, steel girders and columns. Besides, the 2,500-sq ft bar has the capacity to serve 300 people at a time and has on offer 75 brands of whisky, 35 varieties of vodka and 30 kinds of beers. It also claims to have the longest single-piece bar in the capital. This venture will soon be followed by a Lebanese restaurant, Mashraviya, for which the duo have flown in a chef from Dubai. Coming up by the year-end is a Kashmiri joint, Kashmir Club. The brothers are also starting a chain of patisseries beginning with a coffee shop at 1, MG Road, Delhi’s new fashion mecca.