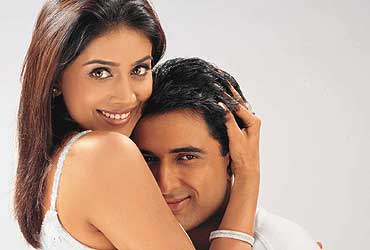 outlookindia.com
-0001-11-30T00:00:00+0553
Retroing On RD
His songs have been playing endlessly on the radio, and remixed to set Generation Y rocking. Now the compositions of Rahul Dev Burman are all set to return to the big screen as well. More precisely in director Anant Mahadevan’s Dil Vil Pyar Vyar, produced by Viveck Vaswani. Featuring several familiar RD classics, Dil Vil will be the first Hindi film to have a soundtrack based on old songs. "One can call it a retro musical," says the director, thrilled because 2.75 lakh units of the soundtrack have already sold in the first five days of the release of the album. "This is the first attempt of its kind," says Mahadevan.

But why Panchamda’s songs? "I have several other favourites," says Mahadevan, "but RD’s music is very contemporary, very today." And recreating the songs is none other than Bablu Chakroborty, the man who used to arrange music for RD.

The unusual project is also exciting the filmstars who are associated with it. R. Madhavan, for example, feels that the venture is "simply great". Sonali Kulkarni is tickled both by the concept and the story. Hrishitaa Bhatt not only loves the songs but also likes the way the film interweaves four love stories. And Sanjay Suri believes that such an interesting idea should work wonders. The rest, of course, are keeping their fingers crossed. The idea is sound, now for its execution. Let’s hope it’s good enough not to have Panchamda turning in his grave.