You may not agree with Qazi but you can't help admire the way he puts across his views. That is probably why the MEA has finally asked him to leave. 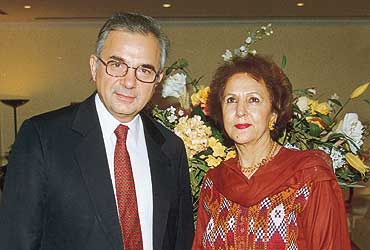 Bye, Bye Qazis
I have known Ashraf Jehangir Qazi almost since the day he arrived in Delhi about five years ago. I met him for the first time at Khushwant Singh’s place. Khushwant’s home is often the first port of call in Delhi for the newly-arrived diplomats. And it is fitting that the last farewell party for Qazi was also given by Khushwant!

Qazi is very likeable and suave, the most charming diplomat I have ever met with the possible exception of Samar Sen who represented India at the UN many years ago. You may not agree with Qazi but you can’t help admire the way he puts across his views. That is probably why the MEA has finally asked him to leave. It could not have been comfortable with his success in New Delhi’s political, media and social circles. He articulates Pakistan’s position extremely well without being abrasive. And yes, he is also great on television.

The two aspects of his personality—the professional and the personal—never seem to clash. He was very well-liked in Delhi. It’s ironical because India-Pakistan relations are at an all-time low and nobody I know agrees with his government’s point of view. But then in the Delhi party circuit an ambassador’s personality determines his popularity, not the country he represents. The Russian or the Chinese ambassadors are not so sought-after but those from Belgium and Austria are just all over the place.

Qazi has a charming wife and two lovely daughters who were the toast of the capital’s young party scene. Qazi was afraid that the picture of Khushwant kissing his daughter in a grandfatherly way would be taken amiss in Pakistan but it was Nawaz Sharif himself who told him to ignore it and laughed it away.

I am sorry to see him go. I believe it is all the more important to keep the lines of communication open between countries at times of crisis.