Page three baba and baby log -- and other such. 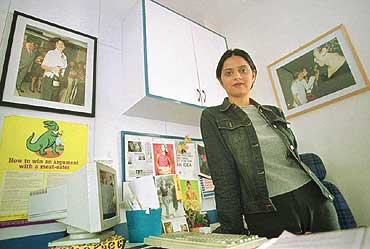 Little Birdies
All that mindless partying—the stuff that our Page 3 is made of—did seem to have a higher purpose. It’s got a nod of approval from the haughty literary world and two books on the celeb circus are soon to hit the stands. There’s one by Kanika Gahlaut, an Indian Express staffer whose unenviable beat it was to hobnob with certified Page 3 artistes. Tentatively called Among the Chatterati (Penguin; expected in March-April), it’s an extension of what many of her acquaintances call "non-serious journalism". Another one obsessing over Page 3 foibles is Perfect Relations’ head Dilip Cherian’s newspaper columnist wife, Devi Cherian. Says she: "Page 3 (Roli Books; out later this month) is a coffeetabler that shows the party tricks people employ to wrangle their 15 minutes of fame." In fact, the Page 3 ball is a bit like being held captive at one of Jay Gatsby’s joyless soirees. Just swap present-day New Delhi with New York City of the 1920s. Its Long Island with the Capital’s new-money suburbs and socially-mobile farmhouses. The pathological shoulder-rubbing, the exhaustive air-kissing, the climbing on ladders of big names and associations, the shameless mongering of ‘personal effects’ and talents, the sartorial coups, they all ring a bell. "It’s tempting to take a look at what it means to be part of this whole charade. The power play, the connections trap, the velvet-gloved I-know-your-Editor threats, the who’s-with-who pictures, the sugar-coated exchanges of gossip, the deep-rooted hyposcrisy, it could well be another planet," says Gahlaut. And before you think that’s cakewalk, also consider that she’s been manhandled, threatened on the phone and lobbied against because she wrote and spoke her mind.

Hey have been amassing awards for their environment and travel shows. Now the Alva Bros, Nikhil and Niret, have switched to reality TV. And for a start it’s Commando, a programme that captures the special commando training for army personnel spread over 39 days in Belgaum, that’s begun its run on BBC World. On Zee, the duo have an adventure gameshow called Raah. "It’s a spectacular stage for five couples to compete against each other," says Nikhil. And to further fuel their inherent sense of adventure, Nikhil and Niret have Kahani Jurm Ki, their first attempt at fiction which dramatises real-life crime stories.

What do you do when the going gets tough? Well, you just make the best of it. In a bid to attract customers in these recession-hit times, Air Sahara has come up with a unique deal. A Sahara ticket will now double up as a pass for a music concert. Beginning February 1, and coinciding with Sahara India’s silver jubilee celebrations, a live music festival will be held aboard its flights. The repertoire will range from rock to Hindustani classical. "Our inflight entertainment guarantees there won’t be a dull moment when you’re flying," claims Uttam Kumar Bose, CEO, Air Sahara. "We want to de-stress our corporate clientele."

More than just another fashion show, this was a unique collaboration between a designer and a textile manufacturer. Designer Rocky S’s recent show in Mumbai’s Retreat marked the launch of a new textile brand from Siyaram’s, Mistair. Pitched as a premier fabric, the company honchos claim, "It allows the air to flow through and keeps the skin fresh all day long." The launch event was titled International Exotica and had the who’s who from the world of modelling—Rahul Dev, Aryan Vaid, Inder Sudan, Aditi Govitrikar and Diandra Sores among others. Rocky S., meanwhile, continues his association with the group by creating fashion literature for retailers to keep them abreast of the latest designs, colours and fabrics of the season.

To the true aesthete, Giovanni Alessi’s name must surely ring a bell. So should the names of Aldo Rossi, Alessandro Mendini, Philippe Starck and Ettore Sottsass, all design gurus from Italy’s high-profile Alessi stable. The lifestyle-conscious Indians couldn’t have asked for more—thanks to the vis-a-vis: Alessi collection, they too can flaunt Mendini’s Peyrano Chocolate Box, designed in 1988, or Giovanni’s Lilliput, a highly original and inventive salt and pepper set, or the juicy salif lemon squeezer of Starck. Then there are the brass and steel ashtrays, funky cat-face diabolix bottle openers and Rossi’s La cupola series of espresso coffee makers. Says Amit Gupta, director, vis-a-vis: "Indians are becoming increasingly discerning, they don’t want anything short of original works." In the price range of Rs 700 to Rs 70,000, the products are available in Bombay and Delhi to begin with.
Bobby John Varkey