As the bodycount creeps up, Kashmir’s agitation adapts to abnormal times 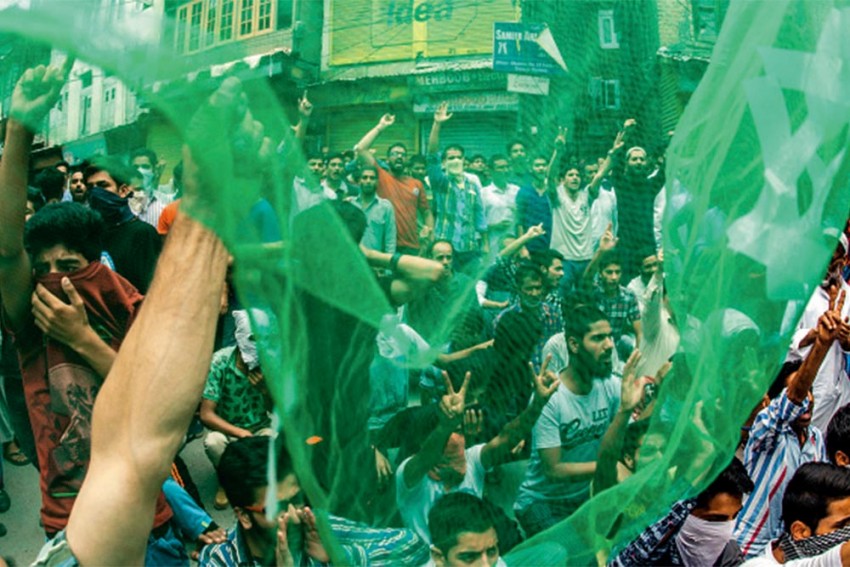 Protesters at the Srinagar offices of the UN Military Observer Group
Photograph by Getty Images
Showkat A. Motta August 19, 2016 00:00 IST The Defiant Fire-Dwellers 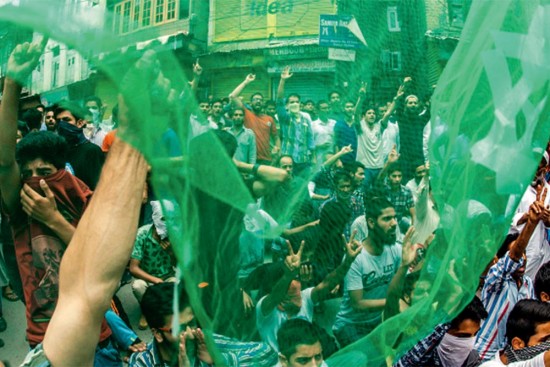 On a normal day, Chanapora, the main road in uptown Srinagar leading to Lal Chowk, is choked with extented shop fronts, knots of hawkers, vehicles in several snaking lines and a bustling crush of pedestrians. Crossing this stretch usually meanas an exasperating crawl. Today, however, this wide thoroughfare is absolutely deserted; actually, it has been like this for the past 40 days, as have most other roads in Kashmir.

All these days, the Kashmir Valley has been in the vice-like grip of a curfew that has turned it into a still-life painting of desolation. The agitation that began after the killing of Burhan Wani on July 8 is also intensifying by the day.

Chief Minister Mehbooba Mufti is as clueless as ever. The only answer with the state and its agencies to street protests is force. On the night of August 17, a young lecturer, Shabir Ahmad Monga, was allegedly beaten to death by the army in Khrew area of south Kashmir, taking the death toll since July 8 to 67. Monga, 30, was brought to hospital by the police with injuries on his face and chest.

Even leaders of mainstream parties, seen by many as Indian agents, are miffed over Modi’s I-Day speech, with its reference to Balochistan. They say New Delhi’s efforts should rather be focused on setting its own house in order. As former CM Omar Abdullah put it, “Your own house is on fire. Instead of trying to douse it you are talking about problems in others’ houses. If the prime minister wants to talk about Balochistan, do it, but we want him to talk about Kashmir as well, which has been burning for the past 40 days and has witnessed 70 killings.” Omar says that it is disappointing how the BJP government had turned its focus on the “tried, tested and failed formulations of looking at the issue in Kashmir through the prism of Pakistan and radicalisation”. The unrest in Kashmir, he says, is not because of Pakistan. “While suggesting so might be politically expedient and convenient for the Centre, it comes with the unimaginable risk of alienating Kashmiris to an irrevocable and irreparable limit. When that limit is breached, no amount of rhetoric or grandstanding will help.”

Veteran Communist leader M.Y. Tarigami says the least people expected from the PM was to express his concern about the tragic situation in Kashmir in his speech. Instead, he spoke about rights abuses in Balochistan and Gilgit.

On the ground, there’s no little let-up in anti-India protests and clashes, even as mosques continue to reverberate with pro-Pakistan and revolutionary songs, a throwback to the early ’90s. The authorities have now imposed night curfew in Srinagar and other major towns, following an ambush on an army convoy in Baramulla that killed three soldiers. Broadband services were res­tored after five days, while mobile internet and mobile telephony services remained suspended in the Valley.

Sensing the mood, separatists in their weekly protest calendar have extended the strike till August 25. Shopkeepers have been asked to keep their outlets open from 6 pm to 6 am during the week. Justifying the protest calendars, chairman of the moderate faction of the Hurriyat Conf­erence, Mirwaiz Umer Farooq, says that the “resilience and defiance of the people of Kashmir is a loud and clear message that they will not give up their struggle and the agitation will not die its own death, as India would like to believe”.

On the other hand, militants have asked people to continue the agitation. “You should continue protests and shutdowns. No matter who calls off the shutdown, you should not allow it because we only follow Allah and no one else,” says Zakir, who has replaced Burhan Wani as the new face of Kashmir’s insurgency. In a video, Zakir, a former engineering student who opted out of college to join the militancy, says the killing of Burhan and his associates has taken the ‘Islamic movement’ to a new level, and should now be given ‘full support’.

Meanwhile, as New Delhi continues to reject Pakistan’s demand for international intervention in Kashmir, it seems the issue is no longer bilateral. The chief of UN human rights commission has urged India and Pakistan to grant “full and unhindered” access to Kashmir to probe human rights abuses. “Such access would enable us to provide an independent and fact-based analysis of the situation, which is so crucial in volatile, politically-charged situations,” says Zeid Ra’ad Al Hussein.

Kashmir is indeed on the international radar, thanks to policymakers in Delhi.

"In The Current Situation, Not A Single Baloch Is Ready To Be With Pakistan"