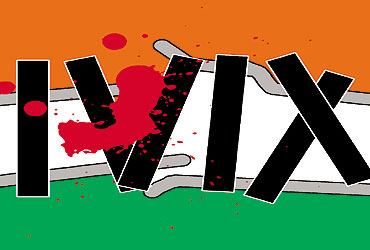 outlookindia.com
-0001-11-30T00:00:00+0553
No terrorist group has claimed responsibility yet for the murder of about 200 civilians in Mumbai, or the string of five attacks on tourists in Srinagar last Tuesday. This is par for the course. In 17 years of violence in Kashmir, insurgents and crossborder 'guests' have taken credit only for attacks on the security forces. When they kill civilians they remain silent or try to shift the blame on the government. But both attacks bear the imprint of the Lashkar-e-Toiba (LeT): In Mumbai, it was multiple, closely synchronised explosions to maximise shock and anger. In Srinagar, tourists were targeted in synchronised attacks in a bid to disrupt the huge revival of tourism that has taken place in the past two years.

These are not random attacks. Nor are they unconnected. Tuesday's attack in Mumbai was the fifth in eight months. Their strategic purpose is to trigger a communal bloodbath in India in which thousands of Muslims are killed in 'reprisal' killings such as those of Gujarat. The first was made upon shoppers in Delhi, last Diwali, when a string of explosions killed 52 people and injured more than two hundred. The second was the string of blasts in and around the temples of Varanasi. The third was the selective killing of 35 Hindus in Doda—the first such act in seven years even in that troubled part of Jammu and Kashmir. The fourth was the fidayeen attack on the RSS headquarters at Nagpur. Had the fidayeen not gone to the wrong building, they might have killed scores of senior RSS cadres who were participating in a 1,000-cadre summer training camp being held at its training centre (sometimes mistaken for its headquarters), not far away. Tuesday's attack in Mumbai was the fifth in this series.

The attacks in Srinagar were the second of their kind in six weeks. The first was a string of three grenade attacks on Gujarati and Bengali tourists in Srinagar towards the beginning of June. These led to an exodus of more than a thousand tourist buses from the Valley and the cancellation of thousands of bookings. This second attack, on another Bengali tour bus, on a car with a Haryana number plate, and on tourists at the tourist reception centre, seems designed to complete the job.

All the previous attacks, except the one on the tourists in June, have been traced back to the LeT. Even before Tuesday's outrages they had begun forming a disturbing pattern. President Musharraf publicly abandoned the Pakistani dream of annexing Kashmir when he proposed a federal Kashmir with something less than full sovereignty and accepted Dr Manmohan Singh's suggestion that the solution to the Kashmir dispute lay not in redrawing borders but making them irrelevant. This left zealots like the LeT only one way of reversing the 'surrender'—to trigger a communal bloodbath in India through calculated attacks on Hindus, making it impossible for Kashmiris to feel safe in India. Had the fidayeen managed to penetrate the RSS training camp at Nagpur, they may have succeeded.

India may again prove lucky. Even though the death toll has already risen to around 200 in Mumbai, these attacks, too, may not succeed in triggering the kind of riots we saw after the burning of the Sabarmati Express in 2002. But we must now face the possibility that the LeT will continue to mount such murderous attacks till the patience of the Hindus finally snaps—although they are never exclusively the victims in such mass-scale terror—and communal riots ensue. It would be idle to pretend that Tuesday's attacks have not changed the parameters of the India-Pakistan dialogue for the worse. The abortive attack on the RSS headquarters had already forced Dr Manmohan Singh to abandon his plans to go to Islamabad. If the attacks in the heartland of India continue, he will come under immense pressure to take some form of pre-emptive action. The least that pressure will do is put an end to the rapprochement between India and Pakistan.

Pakistan obviously does not want this, for an increase in tension with India would force it to redeploy troops from Waziristan and Balochistan. That would pose a dire threat to its territorial integrity. General Musharraf has, therefore, condemned the attacks in the strongest possible terms. But the LeT and its associates will not be stopped by words alone. Pakistan must, therefore, do more. The simplest and most convincing proof of its sincerity would be for it to share intelligence on the LeT's plans to perpetrate outrages in mainland India with the Indian government. New Delhi also needs to see that if the LeT is doing all it can to prevent a meeting between Dr Manmohan Singh and General Musharraf, then postponing such a meeting indefinitely will crown it with success. Perhaps, the time has come for Dr Manmohan Singh to dispense with intermediaries and at least speak to the general directly on the phone. Both the governments need to face this threat together.
(The author's columns can be read at www.premshankarjha.com)

The Street Has The Edge