If India intended to kill with kindness, Pakistan did not quite let it do so. Thus was another peace initiative reduced to a merry farce Updates 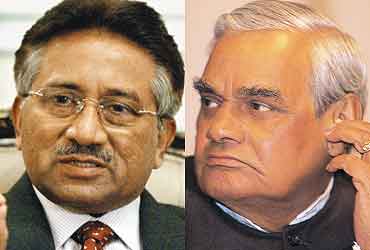 outlookindia.com
-0001-11-30T00:00:00+0553
On October 22, the Pakistani high commission received a call from South Block requesting its high commissioner, Aziz Ahmed Khan, to come down for a meeting with the Indian foreign secretary, Kanwal Sibal, the same afternoon. Already, television channels were flashing the news about deputy prime minister L.K. Advani's willingness to meet the leaders of the Kashmiri separatist umbrella organisation, the Hurriyat. There couldn't have been a more propitious omen.

When Khan and Deputy High Commissioner Syed Munawar Bhatti reached South Block, Sibal informed them about India's decision to present a set of 12 proposals to nurture peace. Over the next half hour, Sibal proceeded to orally convey the details of the proposals to Khan and Bhatti. The Pakistanis wondered whether India would go to the media with the details.

The Pakistani diplomats took less than 15 minutes to drive down from South Block to the their high commission. On reaching there, they found the TV channels beaming live the press conference external affairs minister Yashwant Sinha had convened on India's 12 proposals; New Delhi was going to town on them. Perhaps it rendered easy the Pakistani diplomats' task of briefing their headquarters: they simply told Islamabad to tune in to Indian TV channels.

Reciprocity is the defining feature of Indo-Pak diplomatic relations. A week later, on October 29, Islamabad emulated India to script a PR exercise in much the same way. Indian high commissioner Shiv Shankar Menon and the deputy high commissioner T.C.A. Raghavan were summoned to the foreign office, where, for precisely half an hour, they took down notes as Pakistani foreign secretary Riaz Khokhar orally detailed his country's response to India's proposals. Soon, the Pakistani TV channels were telecasting live Khokhar's press conference.

Call it comedy, call it ridiculous, or even shrug your shoulders and say what else was to be expected from India and Pakistan; there is little denying that the latest round of peace initiative was diplomacy through the media, deliberately shunning the opportunity of taking recourse to diplomatic channels to address issues of some import. Contrast this to the handling of the discussions between National Security Advisor Brajesh Mishra and his Chinese interlocutor Dai Bingguo on the contentious boundary question. At the end of the discussions, a brief press statement was released saying the meeting was cordial, and that they had agreed to meet on mutually acceptable dates in Beijing.

But there were other aspects of the initiative that raised some eyebrows. For the Pakistanis, some of the Indian proposals had a ring of familiarity. As a senior Pakistani diplomat points out: "We were not really surprised at the so-called Indian proposals. Our naval attache in Delhi, for example, met representatives of the Indian Navy way back in the third week of February 2001 and later in May this year to seek a working arrangement between the Indian Coast Guard and our Maritime Security Agency. When we proposed it, all they said was: 'We will get back to you.' We had been waiting all this while."

New Delhi, obviously, was working on the assumption that since some of the ideas had been initiated by Pakistan, Islamabad would find it difficult to reject those. For instance, Pakistan Prime Minister Mir Zafarullah Khan Jamali had on October 28 suggested a resumption of sporting and rail links between the two countries when he had called up to reciprocate Prime Minister Atal Behari Vajpayee's peace initiative of April 18.

Similarly, the proposal to allow senior citizens to cross the Wagah border on foot, Pakistani diplomats point out, was a facility India withdrew unilaterally in 1984.Indian diplomats counter it was done to nix Pakistan's sponsorship of separatist sentiments in Punjab, that it was also the year Operation Bluestar was launched to flush out Jarnail Singh Bhindranwale out of the Golden Temple in Amritsar. New Delhi's subtext: you can't harbour dubious intent and expect India not to protect its interests. Yet, what remains unexplained is why India did not restore this measure after the insurgency in Punjab was stamped out.

The proposal not to arrest fishermen who stray "within a certain band on the sea" on either side presents a mixed picture. Prime Minister Vajpayee, in his opening statement at the plenary of the Agra summit with Pakistan President Pervez Musharraf, said, "We have recently issued instructions to our Coast Guard not to take into custody Pakistani fishermen, who inadvertently stray into our waters, but to turn them back after due warning. A similar reciprocal gesture on Pakistan's part would lead to a permanent solution of this recurring problem."

Pakistani sources say an informal band of some 20 nautical miles does exist and people on both sides are lenient when fishermen stray a "few miles here and there". They, however, cite instances to claim that at times Indian fishermen have strayed more than 80 nautical miles. The problem is more piquant, sources say, with repeat offenders. External affairs minister Sinha told Outlook: "This is a band that will have to be negotiated. Specially in Sir Creek where there is no determined maritime boundary, there is much greater confusion. Therefore we thought that we could give them some kind of a negotiated band in the sea where a fisherman could stray inadvertently, not deliberately, and if he does stray, then we should not arrest him." The Pakistanis in their counter-proposals want these fishermen to be released within a month of their arrest. India accepted it, though saying it would have preferred an arrangement for their 'non-arrest'.

Islamabad found some other Indian proposals as little more than an attempt at one-upmanship. These include offering medical facilities to 20 Pakistani children, augmenting the number of buses that could move in a convoy between New Delhi and Lahore, and forging a bus link between Srinagar and Muzaffarabad—a constant refrain of Kashmiris. New Delhi, however, says it's sincere in its intention of wanting to deepen people-to-people relationship, and that a conducive atmosphere must be created to conduct sustained dialogue (see interview).

But Pakistan construed it as India's attempt to embarrass Islamabad, to even stampede it into responding positively. Consequently, Pakistan, through Khokhar, chose to hit below the belt. Accepting that the Indian suggestion of a bus link between Muzaffarabad and Srinagar was a "novel" idea, he however added a caveat: Pakistan was willing to accept the Srinagar-Muzaffarabad bus link as long as people carried United Nations travel documents. Khokhar's reason: Kashmir is a disputed territory. He then went for the jugular by offering 100 scholarships to Kashmiris, medical treatment to those disabled in the Valley, and assistance to help "widows and victims of rape, affected by the various operations launched by security agencies".

Some senior Indian officials found the exchange a "gimmick, a debating club between two diplomatic institutions where the spirit of bilateral dialogue is missing". The Srinagar-Muzaffarabad proposals, say insiders, was a "non-serious one to begin with". It was mooted with the assumption that Pakistan's inevitable rejection of the proposal would embarrass Islamabad, and provide entertainment.

But what ensued was unpleasant and counterproductive. For instance, a source says, Pakistan can now unilaterally offer scholarships to Kashmiris, a measure fraught with serious consequences.The only way India can counter it is to de-recognise professional degrees of Pakistan.

Unilateralism, indeed, has its limitations. Take the Indian proposal of the Khokrapar-Munabao link. On July 9, 2001, before the Agra summit, India announced that a checkpost would be opened at Munabao in Rajasthan, and also at designated points along the International Border and the Line of Control in Jammu and Kashmir. "Administrative arrangements, including those for transport, will be urgently put in place so as to implement the prime minister's decision within three months," declared an Indian statement. Even after the collapse of the Agra summit, then foreign minister Jaswant Singh, on July 17, 2001, studiously maintained, "Significant confidence-building measures announced prior to President Musharraf's visit would be fully implemented on our part."

The border post at Munabao, however, died a natural death: it was not possible to create one without a reciprocal gesture from Pakistan. Now Pakistan wants to discuss the Khokrapar-Munabao and the Karachi-Mumbai ferry link only through a composite dialogue format. This isn't expected to happen any time soon. Says a senior Pakistani diplomat, "Wouldn't it have been far more prudent to have consulted us rather than rushing to the press?" Similarly, Pakistan has lauded the Indian idea of holding visa camps outside the two capitals but said this wasn't feasible until the staff strength of the two high commissions (110 each) was restored to the status prevailing before the December 13 attack on Parliament.

Where does the latest round of recriminations, albeit civilised, leave the peace initiative? Some are optimistic that some good may still come out of all this. For instance, a senior government leader says, none of the Kashmiri leaders, including those from the Hurriyat, has rejected the Srinagar-Muzaffarabad bus link. The only exception was the breakaway Hurriyat leader, S.A. Geelani, an inveterate Pakistani supporter.

Similarly, the Hurriyat hasn't yet rejected the offer of dialogue with Advani, who, incidentally, consented to meet them after N.N. Vohra—the Centre's interlocutor on Kashmir affairs—predicted his mission was bound to fail unless New Delhi offered a political face-saver to the politically disaffected in Kashmir. Sources say the Hurriyat leaders are likely to visit Delhi to meet Advani after Ramzan. But others feel it may, once again, insist on travelling to Pakistan to consult the militants there.

Will New Delhi agree to this demand which it has always rejected? A senior source argues, "They can ask for the moon. Once the dialogue and the negotiations begin, both sides will make their own demands. It's part of the game." Considering the salience of Kashmir in Indo-Pak relations, however churlish, last week's events at least did not have the tension redolent of last year.

On The JP In The BJP