The Dance Of Shiva

The Muslim conquest did cost India hundreds of temples. But in the end, what was destroyed was art and not religion. 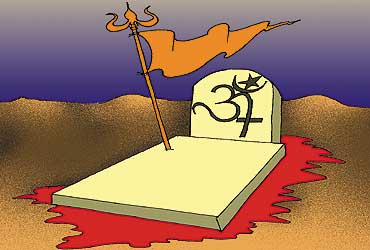 outlookindia.com
-0001-11-30T00:00:00+0553
Narendra Modi must go. If Indian democracy is to retain any shred of its capacity to regulate the lives of a billion people so that they may live in peace and amity within one nation, this monster must be removed from power. The National Commission on Human Rights has related in chilling detail how Modi, and key members of his government and party, interfered at every turn with the proper administration of the state, to demoralise its officers, to shield criminals, arsonists, rapists and murderers, to deliberately give marauding VHP and Bajrang Dal mobs a free hand in destruction, and to replace honest, upstanding and idealistic members of the police and administration who refused to do so with others more pliant, communally tainted or simply spineless.

But I have another, and far more personal reason for wanting him gone. It's simply that he has, for perhaps the first time in my life, made me deeply, and lastingly ashamed of being called a Hindu. He has thus robbed me of the deepest part of my patrimony. That patrimony came to me, as to all Hindus, from the Vedas. But it was restored to me over six hundred years by the Muslim conquerors who invaded Hindostan and destroyed our temples. To explain precisely how the conquerors did this, not just for me but for each of the eight hundred million Hindus of India, it is necessary to make a personal digression.

Three years ago, my daughter and I visited Bali. Purely by chance we arrived on the day of ascension (attainment of Samadhi) of the founder of Hinduism in Bali eight centuries earlier. Possibly not by coincidence, we found ourselves at the temple of ascension and, as Hindus, were ushered into the innermost courtyard where the prayers were just starting. What was most striking was the profound harmony that reigned all around, a harmony that one could almost breathe. In the courtyard, three priests were purifying ritual water, one representing Brahma, the second Vishnu and the third Shiva. The purification over, the congregation was blessed with the holy water and then began its prayers with the chanting of what took me some time to recognise as the Gayatri Mantra. The prayers ended with the ritual drinking of the holy water to murmurs of On Chanti, Chanti, Chanti.

For a little while I was overwhelmed by a sense of loss: this was the India that had once existed, before the turmoil of eight hundred years of invasion destroyed the harmonic fabric of a society in which the temple had been the single focus of not only religious and philosophical, but also social life; where men and women mingled and prayed as equals in a single congregation (look at the friezes around the bases of the Khajuraho temples if you do not believe this).

And then, in an instant, a veil seemed to lift from before my eyes. I realised that what I was witnessing was only ritual, and that for all but perhaps a chosen few present there, it may have been a ritual devoid of philosophical and even true religious content.

Among those present was an infinitely courteous direct descendant of the founder, who spoke English. I tried to engage him on the meaning of the ritual and the concepts by which people related to them. Language may have been a hurdle but I drew a blank. The more probable reason was that he had never seriously had to question his beliefs or reflect seriously on their foundations. In his beautiful, harmonious, but cloistered society, the need had never arisen. And suddenly, my sense of loss was replaced by a profound feeling of thanksgiving for India's tumultuous, painful, and turmoil-filled history. For in India, thanks to the arrival of conquerors who brought a conflicting faith, Hinduism has been tested as if by agnipareeksha, and not once but over and over again, has risen Phoenix-like to its pristine beauty.

the Muslim conquest did undoubtedly cost Indians hundreds of great and tens of thousands of little temples all over northern India. The destruction was awesome and the art treasures lost irretrievable. But in the end, what was destroyed was art and not religion. The art was the product of man. It was not the creation of God, much less of the spirit of Hindu society. Yet enough has survived, in Khajuraho, Konark, Ajanta and Ellora, Badami Aihole and Pattadakal, Modera, Halebid, Belur, Thanjavur and a score of other places to give us all the sense of continuity that our religion and society need.

The spirit of Hinduism never failed. Forced out of its cloistered Balinese-type sancta it sought refuge in the people and there rediscovered its soul. The soul was in fact none other than the Bhakti movement with its eight great poets whose simple yet magnificently profound verses told all of us to look for God not in temples and mosques but within ourselves. God resides in the people, in the poor, in the merciful, the generous, the compassionate. He resides all around us in srishti—nature. He is embodied in the natural order of life which it is our dharma to preserve. Only the "Temple of Heaven" in Beijing embodies a comparable concept of the relationship of God and nature.

Parallel to the development of Bhakti was a gentling of Islam into a profoundly peaceable, Sufi, Indian religion. Shrines like Hazrat Nizamuddin, the Dargah Sharif at Ajmer, and Kashmir's Chrar-e-Sharif stand as monuments to this syncretic movement, but there are thousands of little places of worship where poor people still go to pray first and ask whether they are Muslims or Hindus later.

It would be too much to expect the Sudershans, the Katiyars, the Singhals and the Mahesh Bhatts to understand that what India has experienced in the last eight hundred years is the Cosmic dance of Shiva, captured in the awe-inspiring concept of Nataraja, who destroys in order to create. Today it is not just the Indian nation that these worthy gentlemen are betraying, but Hinduism himself.