The Daggers In Chinatown

A recalcitrant Bengal under Chinese control, a gallery of grotesques, murder—this futuristic comedy can hurt 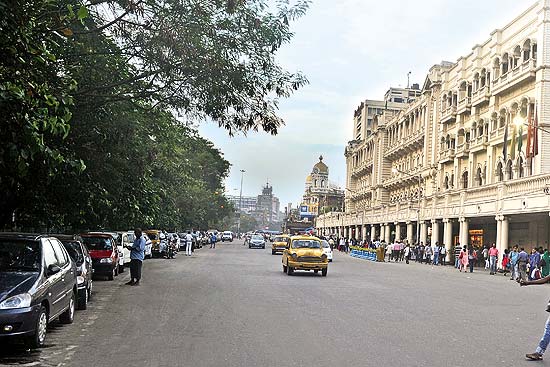 Murder with Bengali Characteristics takes us back (to the future) to the India of Shovon Chowdhury’s debut novel, the brilliant Competent Author­ity. It is 2036—10 years after India lost an ill-advised war with China. The nuke attacks have obliterated Mumbai, and left large parts of Delhi highly rad­ioactive. Whatever remains of the nat­ion is run by a criminally insane bur­eaucrat. Bengal (and the Northeast) is a Chinese protectorate, which the Chinese are finding hard to govern, given that Bengalis have historically believed in the principles of general recalcitra­nce, anarchy, and the superiority of poetry and fish above all other earthly delights.

Murder WBC is not a sequel to The Competent Authority, because its events take place contemporaneously with those described in the earlier novel. Some characters who were introduced in Competent Authority and then mysteriously kicked to oblivion are here given a chance to tell the reader what they did after they were ejected from the opus. Others, who were mentioned in passing, get lead roles in Murder.

Chief among them is the no-longer-­late Bijli Bose, who ran Bengal for 30 years with an iron hand in a lead-lined iron glove, and whose final removal met some unforeseen problems, like his backside having got fused to the chief minister’s chair. He has been regenerated from a bit of dna sticking to a glass of his beloved Scotch, and remains as evil as ever. The big new clever introduction is the character of Pishi (Aunty), an aged but still fiery politician who ran Bengal for some time post-Bijli Bose, and has escaped from the mental asylum where the Chinese had locked her up.

The Bengal government is nominally headed by Governor Wen, who, never a very bright man, is sliding into terminal wooziness due to the pills mixed in his coffee by his top civil servant, Ganguly. But real power perhaps rests with propagandist Wang, whose “job was to promote correct thinking”; or General Zhou, manfully trying to meet his daily targets of executing traitors; or Crazy Wu, a former hacker who the government employs to hunt for disloyalty across networks and devices, and destroy such content. “Because Crazy Wu spent so much time making knowledge disappear, no one knew more than him.”

Meanwhile, the Japanese are suspected to be sniffing around, the Maoists are displaying a puzzlingly ambivalent attitude towards the Chinese, a horde of mind-readers may have been smuggled into the Bengal protectorate from India, and the New Thug Society is on the rise, devoted to the cause of an independent Bengal. But, most importantly, the price of fish is rising, causing much discontent among the populace. And Barin Mondol, a man who stayed loyal to the principles of Marxism, and was a teacher in his free time, has been murdered.

The man in charge of the investigation is inspector An Li, an honest Chinese cop whose wife has left him for a Beijing businessman so rich that he has a life-size replica of the White House in his garden. Li soon realises that the killing is just the tip of the iceberg. But the iceberg is both invisible and all around him.

The Competent Authority was marked by a zany imagination. Murder With Bengali Characteristics is a let­hal satire on, well, Bengali characteristics. I have no idea how it will be received by Bengalis, though it may be advisable for Chowdhury to invest in some false beards and moustaches before his next visit to Calcutta. Bengalis have a great sense of humour, except when the joke is on them. Then the references to Tagore and Vivekananda and Netaji are trotted out.

Murder WBC, because it has fictional license, and because Chowdhury’s humour is actually truly righteous anger, can speak much more boldly than journalists have been able to­—about the systematic venality of the CPI(M)’s political strategies, and a true assessment of Jyoti Basu. Not that Chowdhury spares anyone—the Chinese, the Marwaris, the Indian bureaucracy. But finally, this is a book about Bengalis.

This may, one fears, limit the novel’s appeal, though Chowdhury’s humour is both universal and flexible—sometimes it’s a hammer, sometimes a scalpel. This is not a ‘big book’ like Competent Authority was, imagining a whole new universe. This is one of the endless number of stories that that universe can spawn. It is a gripping story, and Chowdhury is certainly the funniest and most prescient writer we have today. But he should go for a big one once more. As Bijli Bose taught the Bengalis to say: “Amaader daabi maante hobe (Our demands must be met).”