Anyone headed for this film will be sensibly advised to read the book first, or you'll need to unscramble the film. 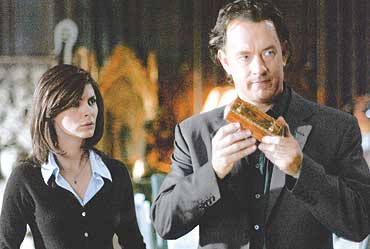 No one should quarrel with this suggestion: rename this film Fourteen Twists and Quite a Few Turns. These come at regular intervals through this dark thriller, in which a rather dubious-looking scholar of symbolism, Robert Langdon (Hanks), sets about cracking a code together with his platonic French partner, Sophie Neveu.

The code to what? To the living descendants of Jesus Christ with access apparently to the Holy Grail itself, the secret to the power of god. But an albino monk wants that secret, and sets about pursuing the pursuers after duly flagellating himself (with inspiration from Mel Gibson’s Passion). Frequent relief is provided along the way as someone keeps killing someone else.

The code-cracking pursuit leads to a tour of tombs through various European churches where Tom and company pause to deliver comic-book lines on the meaning of symbolism before the pursuers come knocking, and they have to pack and run again. And how will they get away this time? With embarrassing ease, like every time. Much of the dramatic pace of the film is thus built on the standard Hollywood cops-and-robbers sequence, introduced every ten minutes or so to keep the audience alert.

In between slipping through secret tunnels into high-speed cars or leaping off a private jet into an equally private Rolls, Hanks and partner move ever closer to cracking the code that could lead them to Christ’s living descendant. But the turn that leads to this discovery was always begging to be guessed, right from the start.

Anyone headed for this film will be sensibly advised to read the book first, or you’ll need to unscramble the film, just as everyone in it is out...