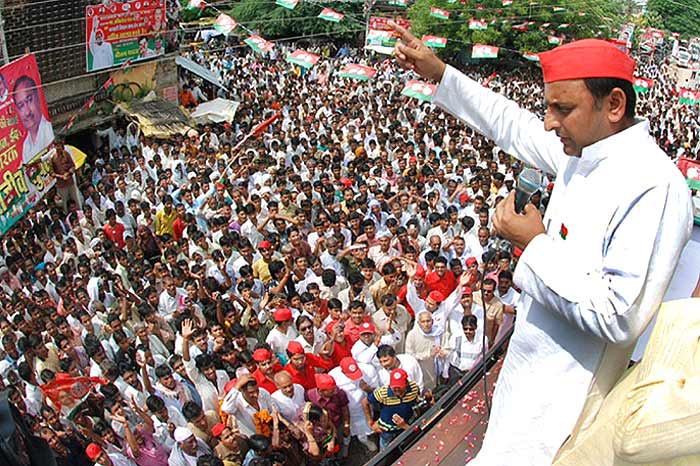 For a man who has all along thrived on a rough-hewn image of wrestler-turned-political fighter, it was a surprise when Mulayam Singh Yadav appeared in a smiling, affable avatar on the front page of the Lucknow Times of India on November 22. There he was, framed within the trademark red-and-green colours of the Samajwadi Party, urging you to ride a new cycle of hope—‘ummeed ki cycle’—the humble aam aadmi transport being the party symbol. The advertisement, on the occasion of Mulayam’s 73rd birthday, would be a first for a party that made a fine art of bulldozing its way through sheer muscle power.

So, what really is behind Mulayam’s makeover and the ‘reinvention’ of the party image? So far, the only transition SP had seen was from muscle power to money power under the tutelage of the flamboyant Amar Singh. His rise led to the estrangement of Mulayam’s old socialist colleagues like Beni Prasad Verma and Azam Khan. Amar Singh imported an odd consortium of Bollywood stars and corporate honchos but in the long run ended up damaging the party by taking it away from its roots.

Of course, with the humiliating rout of the SP in the 2007 assembly election, where it won just 96 seats to rival bsp’s 207, as well as the serious dissensions within the party, the SP supremo needed no telling that the party needed to be shaken out of its languor, and fast.

Enter Mulayam’s elder son, Akhilesh Yadav. The Samajwadi aversion to the use of English did not prevent Mulayam from sending his son to an English-medium school; Akhilesh, in addition, has a master’s from Sydney University in environmental engineering. Anointed UP party president in June 2009, he is now in full command, having placed himself in the direct line of hierarchy over Mulayam’s brother Shivpal Yadav.

With him, the language—or at least the veneer—of SP’s politics is changing. Akhilesh is taking pains to overturn the party’s rustic image that looks with disdain at anything ‘modern’, be it English or computers. “Who said that Lohiaji was against technology or that my father is against modernity?” he’s said to have asked. “The fact of the matter is there were no computers in Lohiaji’s time.”

Cut to now and Akhilesh was seen displaying the route of his Noida-Agra ‘kranti rath yatra’ to Mulayam on a tablet. Akhilesh’s yatra may be a repeat of the one his father had undertaken way back in 1987—which eventually propelled him to power in UP for the first time in 1989—but it is not a show of muscle power. His approach to mass mobilisation—Akhilesh has already covered as many as 132 constituencies in the first leg of the yatra—is less stormtrooper-like. 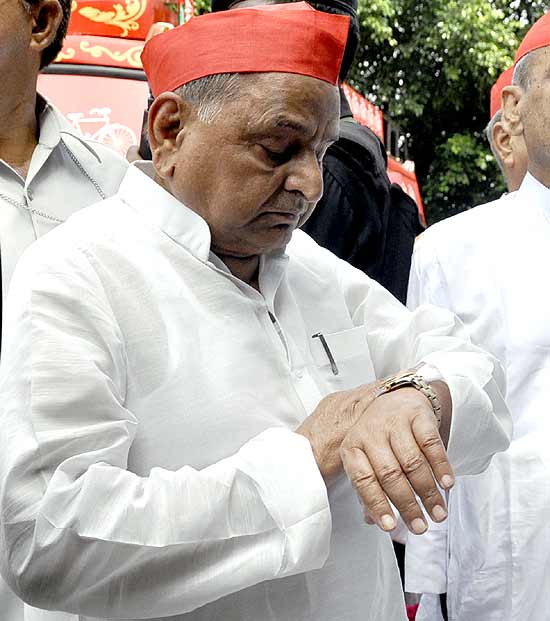 Even Mulayam’s being pitched as tech-friendly. It was he who pressed the button to launch the SP’s revamped website.

But the biggest change, admittedly, is in his bid to combine mass support with a simultaneous nod to aspirational politics. He is using cyberspace and the internet to project the SP’s new face. He got Mulayam again to click the button of the party’s revamped website to challenge his father’s computer-averse image. Upgraded on a daily basis, the website has a team of IT professionals on the job. Vastly improved since the 2009 Lok Sabha elections, www.samajwadi.in now has brief CVs of its ideologues and leaders, besides listing the party’s achievements and aspirations. What’s more, the party is also on Facebook and Twitter.

Ask him about the new, transformed SP, and the Samajwadi scion is quick to brush off any credit. “Well, change is a process of growth, so no single person can take credit for it,” he told Outlook. His less-than-brazen persona, however, can’t hide the fact that Akhilesh Yadav means business. That intent was clearly spelt out in the Nov 22 ad. “As citizens of this great land, we shall soon get an opportunity to open a new chapter in our lives and this occasion gives us an opportunity to determine the kind of future we wish to ensure for ourselves and our children. This is an era of open and free exchange of opinions and ideas. All of us need to communicate with those whom we consider our well-wishers and friends. We want to share our concerns, needs, expectations and apprehensions with them so that we can together build a happy and peaceful future for all of us.”

Well, that’s quite a change of tone for a party that for years played segmented identity politics quite unabashedly, with a couldn’t-care-less-about-the-others attitude. Will this new tack find resonance in a state marked by flux? We don’t have to wait long to find out.