The Custodian Of Conscience

A tribute to Justice Venkatachala and the role of Lok Ayuktas 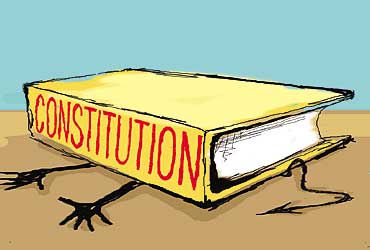 For 20 years, the Lok Ayuktas of Karnataka did little, despite the wide-ranging powers conferred on the incumbents of this office. But this changed since 2001, when Justice N. Venkatachala, a retired judge of the Supreme Court, became Lok Ayukta. He has stirred things up and made life more uncomfortable for officialdom, particularly at the top. Officials and politicians are being closely scrutinised for errant behaviour, and governmental and local bodies being called to account. The judge has a penchant for shaming corrupt persons in authority. He is a good man and is doing good things.

Perception of degrees of corruption can only be approximate. But if the CPI ’03 (Corruption Perception Index) of Transparency International is considered, India’s place between 2 and 3 on the scoreboard, which ranges from 10 (highly clean) to zero (highly corrupt), is abysmally low.

UNDP’s annual Human Development Report has a new slot—the percentage of people residing in the world’s principal cities asked to bribe public officials. The figures for Mumbai and New Delhi were shown to be as high as between 21-22 per cent. The reason there are no figures for Bangalore is presumably because when people are asked to pay a bribe, their hunch tells them to complain to the Lok Ayukta.

Our Constitution was drafted by honourable men and women—during times when a person’s honour was still considered more precious than his life. They, therefore, expected that the oath of office prescribed for higher constitutional functionaries—"to do right to all manner of people, without fear, favour, affection or ill-will"—would be sufficient to impress upon each incumbent his special responsibilities. But after the first generation of post-Independence leaders passed on, corruption in high places rapidly increased; and public confidence in men and women at the top of the political ladder speedily declined.

The new Prevention of Corruption Act, 1988, replacing the Act of 1947, was meant to plug loopholes in the law—but often it turned out only in theory. Under this Act, the state government must sanction prosecution of a state minister for corruption. That, in practice, means corruption amongst state ministers is as controlled or as endemic as the chief minister of the moment chooses to tolerate!

But the Supreme Court has, with a landmark decision in a case emanating from Madhya Pradesh, carved out a new role for the governor—that of the conscience-keeper of the people. Two MP ministers were indicted by the state Lok Ayukta, who recommended their prosecution under the Prevention of Corruption Act, 1988, and for offences of criminal conspiracy: they had been bribed to illegally release seven acres of land lawfully acquired by the Indore Development Authority to its previous owners.

The question of vital importance to probity in public life eventually came up before a constitution bench. The bench, relying on the report of the Lok Ayukta, held in its November ’04 judgement that the decision of the council of ministers was null and void, since the council, in exonerating two of its members, was acting as judge in its own cause, which in law was impermissible. It upheld the governor’s action as valid and constitutional, and set aside a decision to the contrary of the Madhya Pradesh High Court.

This case highlights two things: first, the importance of the non-elected governor in our constitutional scheme. And second, the importance of non-elected Lok Ayuktas in the states. When they perform their functions boldly setting their face against a tidal wave of corruption, they are applauded, not by those who appointed them, but by the people.

It’s a strange reflection on parliamentary democracy, which means government by the people (through its elected representatives), that the institutions which act for and in the interest of the people are (generally) not elected persons, but non-elected ones! The French statesman Jean Monnet often used to say— there are two types of people in this world: those who want to be somebody and those who want to do something. There are far too many in the first category but there are only a handful who really get down to doing something worthwhile. Justice Venkatachala is amongst the select few. And for this I salute him.