The Curse Of The Golden Flower

Everything is marked by excess—from the fluorescent colour palette to the in-your-face, enhanced cleavage of the women. 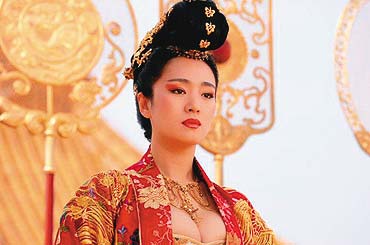 Everything about The Curse of the Golden Flower is marked by excess—from the fluorescent colour palette to the in-your-face, enhanced cleavage of the women. Zhang Yi Mou orchestrates a sensory overkill for the viewers with painstaking care and detail. In the process, he fails to pay as much attention to the plot and the emotional graph of the film, both of which remain rather sparse and spartan.

Not that there isn’t enough drama, rather melodrama, in the story. The Curse of the Golden Flower is a nice mix of Shakespearean tragedy and opera with a dash of Mughal-E-Azam thrown in. It’s set in 928 AD, the era of the Tang dynasty. The royal palace is a den of stealthy sexual transgressions, intrigues, conspiracies, revenge and retribution. The slimy emperor (Chow Yun Fat) is poisoning away the ambitious empress (Gong Li) who is obviously smothered and frustrated in the decadent palace. She has been in a long, secret liaison with her stepson who, in turn, is in love with the imperial doctor’s daughter—a relationship that he later realises is incestuous and hence forbidden. Meanwhile, the empress is busy engineering a coup against her husband.

What follows is a larger-than-life display of bloody power struggles and bitter emotional upheavals in which everyone turns out a loser. Yet, curiously, you don’t sympathise with any of their tragedies. You come out of the theatre unmoved and disconnected. The ornate costumes, opulent frames, stylised ceremonies and rituals—from bathing to tea drinking—and, of course, that expanse of yellow chrysanthemums is all that stays with you. The sophisticated veneer works, not the musty relationships hidden beneath it.

Yi Mou does show his undeniable expertise in the spectacularly mounted warfare sequences that can rival anything you saw in the Lord of the Ring movies. The wonderfully choreographed martial arts sequences are heartstopping, specially the one where masked, flying ninja assassins scurry down the trees and ropes to let loose a gory mayhem. And, last but surely not the least, is the delicately expressive face of Gong Li that tells its own story.

Shards From A Lost Script