The Curious Case Of Benjamin Button

Plodding, facile and fails to connect. A deadpan Pitt does not help either but you can keep staring at him 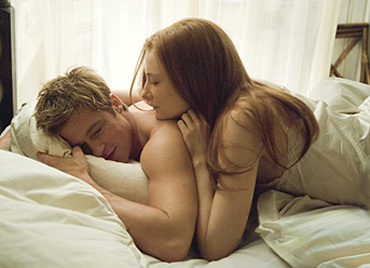 The prologue to the film showing a clockmaker creating a timepiece that ticks in reverse is perhaps the best thing about The Curious Case of Benjamin Button. The urge to go back in time—so that the sons who had to go to war could return home and live a full life—is poignant and heart-tugging. But the core of the film is uninspiring and offers little that is as insightful.

No doubt the concept is enticing. The protagonist, Button, is born on the night World War I ends. He’s a shrivelled, ossified, old bundle whose mother dies in childbirth. Button is left by his father at the doorstep of a home for the aged where he’s raised by an African-American woman. It’s the perfect refuge for Button who starts life as an old man and thinks he’s like the elderly around him. Little does he know that he’ll grow younger by the day to become a "perfect" Brad Pitt, then regress into a piano-playing boy and will eventually wither away at 80, as a baby in the arms of an aged woman (Cate Blanchett) he truly loved.

The film deservedly won the Oscar for make-up (it does need tremendous effort to transform an otherwise vivacious Blanchett into a haggard maid); it also has nice, painterly sets and eye-pleasing cinematography. But beyond that there’s nothing. The interesting concept of living in reverse doesn’t come with any astute observations on life and its many ironies. I’m sure F. Scott Fitzgerald’s story, on which the film is based, must have more to it. Button’s life might be in reverse, but his experiences are like that of any ordinary person, he goes through the same rites of passage—nights out with prostitutes, an affair with a British diplomat’s wife to finding true love. Why, he even visits the mystic India, searching for his soul. So what’s so different here? Even the age-old concept of how old age and childhood are two sides of the same coin doesn’t get explored, nor the human craving for eternal youth. In the name of meaningfulness, all you get is the mumbo-jumbo of the self-help books.

Button is plodding, facile and fails to connect. A deadpan Pitt does not help either but you can keep staring at him.