The Couplet of Ruin

Murder of a small-time poetess, the mafia, sex, ministers. Will her killers be caught? Updates 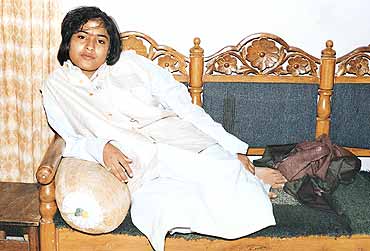 outlookindia.com
-0001-11-30T00:00:00+0553
In death, Madhumita Shukla has hogged more headlines than in her short-lived career as a poet of sorts. L'affaire Madhumita—with its masala mix of an ambitious small-town girl, mafia, ministers, sex, sleaze and murder—hasn't been much of a deviation from the script of what has by now become an almost archetypal plot in the hinterland. And like ever so often, this tale of a woman's vaulting ambition gone sour has become the talking point in Lucknow. So much so that the different registers in which outlandish stories about her hectic social life are being told are getting blurred.

Madhumita's murder and the sleaze it's raked up has, as is the well-set norm with such incidents, obliterated the thin line of incredulity that separates stories in the local media from the feverishly imaginative neighbourhood gossip—of the netas she moved around with, the bureaucrats who called on her and the criminals who craved for her attention.

Her murder, and the salacious gossip left in its wake, has sent the BSP-BJP ruling coalition into a tizzy. There are fears that unless brakes are put on the investigation, the case could turn out to be a minefield, which could blow the public image of many top politicians and officials into smithereens. Right now, in the centre of the scandal is minister of state for stamps and stationery Amar Mani Tripathi who himself has a rather unsavoury reputation. Tripathi, who is linked with the UP mafia, allegedly had an extramarital relationship with Madhumita. She was supposedly carrying his baby when she was shot dead at her Paper Mill Colony residence in Lucknow on May 9. Tripathi vehemently denies any involvement.

Some powerful individuals, it's believed, want the probe scuttled, because:


In fact, there couldn't have been a more inopportune time for this murder as far as Mayawati is concerned. The Samajwadi-BSP war has been hotting up by the day in UP. The violence witnessed during Mulayam Singh Yadav's protracted halla bol programme gave enough signals of his near-fixated aim to get his equally recalcitrant adversary out of the way.

The frantic cover-up bid is obviously intended to deny Mulayam more ammunition. The police officials who took samples for DNA testing from the foetus inside Madhumita's dead body have been severely chastised, reportedly at Mayawati's bidding. The cops say she was "upset by our enthusiasm". The sim card of one of the mobile phones, which had been recovered from Madhumita's residence, is now, surprisingly, with Tripathi. And her sister Nidhi, who had accused the minister's wife of masterminding the murder, has suddenly changed her tune. Asks Mulayam: "Why is no chargesheet being filed against Tripathi? Witness the way the victim's sister is refusing to name anybody now.There clearly seems to be an attempt by the government to twist facts and evidence."

Besides, there are other leads that need to be explored. For example, the testimony of the 11-year-old servant, Deshraj, who had discovered Madhumita's body and reportedly disclosed details about her relationship with Tripathi. The police have whisked away the boy who knows much more than he has disclosed.

That Tripathi knew Madhumita is beyond doubt. Neighbours and some politicians have confirmed that the minister frequented her residence. They also say that two days prior to the murder there was a violent argument between Madhumita and the minister's wife, Madhumani, in the former's house. The fact that Madhumita was seven months pregnant has led to speculation that she was demanding parental legitimacy for the child, another possible motive.

Between clamming up and giving contradictory statements, Madhumita's harried mother and sister give hints on who they suspect: "Jo hatyara hai woh bahuth khaas koi hai jiske ek ishaare par poori prashasan nachne lagti hai (The murderer is someone so important that the entire administration dances to his tune)."

The Opposition too is convinced there is a vip angle to the murder. Says Congress leader Pramod Tiwari: "This is exactly why we have demanded that the case be transferred to the cbi." But Tripathi says: "I knew her just as much as I would know any other poet whose recitations I have heard or attended". His personal things found in Madhumita's house, though, tell another story. Among the things recovered are his clothes, railway coupons in his name and even his horoscope. "Someone could have planted these things to fix me," he says unabashedly in defence.

A mafia don-turned-politician, Tripathi is an accused in several criminal cases. He was dropped from the Rajnath Singh-led BJP government on the charge of kidnapping a businessman's son two years ago. He later joined the BSP and is known to be in Mayawati's good books. But that could become a liability for the chief minister, particularly if it's proved that Madhumita—the 24-year-old daughter of a forest accountant—had to pay with her life for her murky links with Tripathi and other members of the Mayawati establishment. Links that had bestowed prosperity on her within three years of her moving to Lucknow from Mishrana, Lakhimpur. Says her mother: "She used to be our main breadwinner, almost like a son. She used to send us money regularly." (Madhumita's father died in '96.)

The progress of the case rests on the crucial DNA test, to be conducted at the Central Detective Training Institute Laboratory in Hyderabad, which will reveal the identity of the person she was having an affair with. The police say they have a list of suspects but refuse to reveal any name.

Significantly, Mayawati has remained tightlipped on the scandal, while the BJP has chosen to walk the tightrope. The official line is: "No one will be spared. There will be a fair probe." But with the way the investigations have slowed down with the pressure on the police from the highest quarters, no one really believes that the Madhumita murder case will be solved soon—despite tell-tale evidence.