A comet wiped the dinosaurs out 65 million years ago. Is one coming our way? 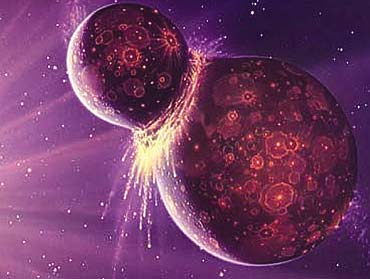 outlookindia.com
-0001-11-30T00:00:00+0553
Far beyond the distant orbits of the outermost planets of our solar system lies the Oort cloud. This ancient region, which has never yet been seen, is a hypothesised celestial rubbish-heap littered with frozen comets. It may not sound glamorous, but along with two other primitive regions—the Kuiper belt of comets outside Neptune and the asteroid belt between Mars and Jupiter—it has the ability to end life on earth as we know it.

Sixty-five million years ago, an asteroid or comet about 10 km wide came hurtling through space from one of these regions at some 20 km per second and slammed into the earth near what is now the coast of Mexico. The kinetic energy delivered by the impact was beyond comprehension—ten billion times the energy of the Hiroshima atom bomb—and it immediately unleashed an all-out apocalypse on earth. Computer simulations and geological evidence suggest that the collision triggered massive earthquakes worldwide, as well as possibly volcanic eruptions and 100-metre-high mega-tsunamis. Meanwhile, the debris from the collision flew up in a plume that rose almost to the moon. As the debris fell back down, it heated up the atmosphere, caught fire and pelted the earth with a hail of burning rocks. These in turn ignited a global forest fire. Those who managed to survive the earthquakes, the volcanoes, the tsunamis and the fires were plunged into pitch darkness and below-freezing temperatures as the dust from the collision blocked out the sun for almost a year. Without sunlight, plants failed to photosynthesise and food chains collapsed.

Around seventy per cent of living species were wiped out, just like that. On land, no species weighing more than 25 kg survived; all that was left of the mighty dinosaurs, who had walked the earth for over a hundred million years, were their bones. (Not exactly: a few flying dinosaurs did survive; they evolved into today's birds.) The obvious question is: can such things—shudder—happen again? The answer is written on the face of the moon. Because the moon has no weather (being too light to hold an atmosphere) and no tectonic plates, its surface is not subject to erosion. But because there is no erosion, the moon's scars do not heal. And yes, one of the first things we notice about the moon's blemished face is that it is pitted with craters, each one gouged out by a past collision.

Evidently, the collision that finished the dinosaurs was not a one-off event. Indeed, at shortly after 7 am on June 30, 1908, a meteor blew up in the earth's atmosphere, flattening thousands of square kilometres. Luckily, the explosion was over Tunguska, Siberia, so the only casualties were several hundred reindeer and one reindeer herdsman. And in 1994 astronomers watched as comet Shoemaker-Levy 9 crashed spectacularly into Jupiter. But the mother of all accidents took place about four-and-a-half billion years ago, when the nascent earth was hit so hard that a large amount of it was blasted out into orbit. The blasted material later coalesced to form the earth's sister, the moon.

Crater analysis indicates that collisions obey a "power law'' distribution. This means that if a one-metre object strikes every year, then a two-metre object strikes the earth only every four years and a four-metre object every sixteen years. The kind of object that wiped out the dinosaurs appears only about once in a 100 million years. Unfortunately, there's no posted schedule so we have no idea when the next big one will show up. At the other extreme, tiny dust-like micro-meteoroids are constantly entering our atmosphere; we often see these streaking beautifully across the night sky in the form of shooting stars.

If a large stray object were to be spotted approaching the earth, could we do anything about it? There are a few ideas out there, ranging from trying to blow it up with a nuclear weapon to trying to divert its trajectory with a nudge. But given that these things speed along at several kilometres per second, we'll need to have pretty good aim. I myself would probably have one last party with my friends.