The Core Issue: How Do We Live?

The intensity, the loss are colossal. Can Srinagar cope with this scale of relief? Updates 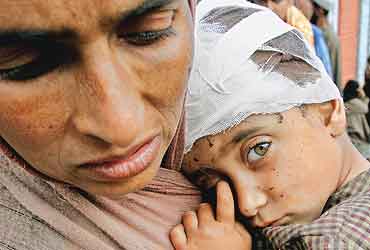 outlookindia.com
-0001-11-30T00:00:00+0553
In Uri—laid out like a freezing, open-air morgue—they are saying this to stave off terminal depression: that, across the LoC, destruction came on a magnitude so extreme that Allah seemed to have been more munificent on the Indian side. Cold, even perverse comfort. But, as survivors and relief workers endlessly pile up the corpses, hunt under the debris in some remote hope of finding signs of life, even this relative sense of escape offers a straw to clutch at. For, the truth is, five days after the earthquake struck at 9.20 am last Saturday, they are still contemplating the rubble of a collapsed universe.

At last count, the toll in the border towns of Uri, Tanghdar and the villages adjoining them stood at 1,195. The roster of the dead can only swell—leave alone survivors under the debris, early onset of snowfall has exposed even the living destitute to the crippling cold. But a traumatised people are slowly picking up the pieces. Help, initially available only in pockets where the army has a presence or could access, is now picking up as the civil administration shakes off its state of paralysis.

And yet the stories and images emerging are heart-rending, enough to break even the most benumbed onlooker: fathers with children draped in white shrouds, families gazing at a pile of rubbish that was once home, the very young orphaned in the first flush of life. A sombre air pervades the Valley, even a long familiarity with tragedy has not braced it for this. In districts like Kupwara and Baramulla, the stench of death is everywhere. Entire villages—like Jabla—were flattened by the 7.6 Richter quake, and thousands have been thrown out to cope with the elements. Those who survived the fury in Uri have horrifying tales to narrate. "Villages on the hilltop were completely wiped out. People were buried along with the animals. We are the only two survivors," recalls Jumma Khan, from a village near Kandi. "It happened in no time. One minute there were houses in lush green surroundings. The next, there was just rubble and cries for help." 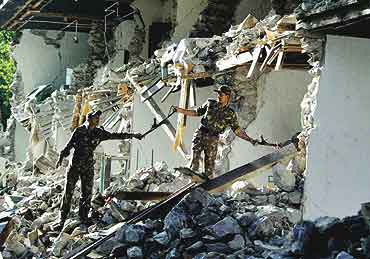 As if this wasn’t enough, they now have to live with this perpetual sense of deja vu: of a revisiting quake. Fresh tremors were felt in the wee hours of October 13. A Richter 5.8, no casualties or damage reported, but it spread panic across the Valley, particularly in Uri and Tanghdar—two towns that bore the brunt the first time. "There is nothing left here," says an armyman involved in relief work, "but the survivors always fear the worst."

The titanic task of rehabilitating survivors will be a litmus test for the Mufti Mohammed Sayeed government. Already, resentment is palpable against the state authorities for not responding to the crisis promptly. Union parliamentary affairs minister Ghulam Nabi Azad added to the air of rancour, saying in Uri that he would not budge from the Valley till the last body was buried. It was a loaded statement to make—implying that the PDP government was not doing enough—in the backdrop of the unsettled issue of power-sharing. A senior PDP minister told Outlook: "The Congress has hijacked the rescue operations. People are more keen to listen to Sonia Gandhi and Ghulam Nabi than Mufti and Mehbooba." Such sniping apart, the vip presence did help galvanise relief operations.

For the locals, their anger was accentuated by the fact that thousands had to brave the rain and the chill in the open on the night of October 8. If any help was forthcoming, it came from the army. Many in the administration, though, feel blaming the state alone for the failure would be immature. Says chief secretary Vijay Bakaya: "Since the army is in uniform, they get noticed. Our officers go unnoticed. It takes time to react to a calamity of this scale.Relief cannot happen instantly." More, civil relief efforts were hampered by the fact that many far-flung areas were inaccessible, whereas the army was already deployed there.

The Union home ministry has pegged the homeless figures at 50,000, so the J&K government has its work cut out. The Centre has till now allocated Rs 642 crore for relief. The governments of AP, Orissa, Karnataka, Haryana, West Bengal, Delhi, Assam and Uttaranchal have also chipped in. The immediate requirement of tents, blankets, food and medicines is gradually being met. But in the long term, considerable financial inputs will be needed to restore normalcy—independent estimates are that 42,000 houses have been destroyed and double the number damaged. 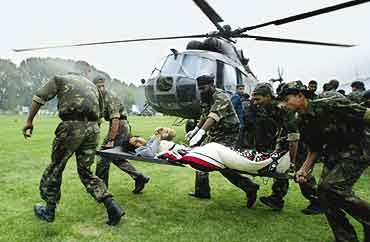 Despite the hint of sour vibes between Delhi and Srinagar, the tragedy has united all political parties, including the separatists. Many, including Yasin Malik, were seen distributing relief packets in Uri and Tanghdar. Says Hurriyat Conference chairman Mirwaiz Umer Farooq: "This is the time to rise above party lines and differences. We need to be together in this moment of grief to make sure that those in need are given help. We have already arranged for relief and will be of help to whoever needs it."

In a statement faxed from PoK, Syed Salahuddin, United Jehad Council chairman and Hizbul Mujahideen boss, said he had convened an emergency session and directed cadres across j&k to suspend operations. He also urged militants to aid relief efforts. That said, infiltrators sought to derive advantage from the disarray in army ranks and, in a particularly gory incident, militants slit the throats of 10 people in Rajouri on October 10.

Of course, these are also desperate times for the kin of those who have crossed over since ’89 to join the militancy—many of them stayed on there, some are even married and have children in PoK. "There’s no news of my son. We have no contact with him. I fear he is dead. But I want to know for sure," says 55-year-old Hajra, whose son had crossed over 11 years ago. There are also many who have relatives in PoK about whom they worry.

There is also bad news for the Srinagar-Muzaffarabad bus service. Going by the photographs of the road from Uri to Kaman post, it will be months before the road is motorable again. Not only have sections vanished under landslides, in the rubble there are also the mangled remains of people. Says PWD minister Ghulam Ahmed Mir, who is camping in Tanghdar: "This road is a top priority. We are in touch with the Border Roads Organisation, and we will do everything possible to get the road link working as soon as possible. Money is no problem." But he’s quick to admit that with winter setting in, funding alone can’t do the trick. The untimely snowfall in Tanghdar, near Sadahana Pass, may mean the bus service will have to wait till next summer.

The immediate priority, though, is coping with human tragedy on an immense scale and providing shelter for the homeless. In the long term, there’s also the question of permanent housing for those who have lost everything. It’s a task that is sure to test the resolve of New Delhi and Srinagar. A strange fate that has yoked together what was seen as a failed state and its disaffected people—albeit in degrees of misery.

by Zafar Meraj in Uri and Tanghdar

It's A People's War Out There