'The Controversial Railway Report Will Be Made Public'

The railway minister thinks there was a careful cover-up operation over what happened at Godhra. An internal inquiry by the RPF was kept confidential and he intends to go public with it. 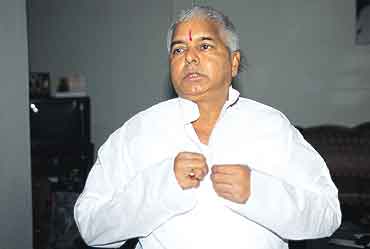 Union railway minister Laloo Prasad Yadav believes the truth about Godhra is yet to be out. He thinks the Narendra Modi government in Gujarat and the NDA government at the Centre at the time had orchestrated a careful cover-up operation. An internal inquiry by the Railway Protection Force (RPF) was kept confidential and the new railway minister intends to go public with it. Excerpts from an interview with Rajesh Sinha:

Ever since you have taken over, you’ve been saying that you’ll have Godhra investigated again. What makes you think this is necessary?
As railway minister I need to obtain information about the incident, to know what exactly happened. So I have started looking. I’m examining the questions raised in Parliament, the replies given by the then government. It’s still not known how the fire started in the coach. I have to know the truth. I have to tell the country what it is.

You must have studied the confidential railway report. What does it say?
It will be made public in due course of time. There are many aspects of the...