‘The Congress Didn’t Respect My Dad After His Death’

YSR Congress' Y.S. Jaganmohan Reddy, in the middle of a padayatra ahead of the 2019 election, talks about the circumstances of his dramatic departure from the Congress and the road ahead. 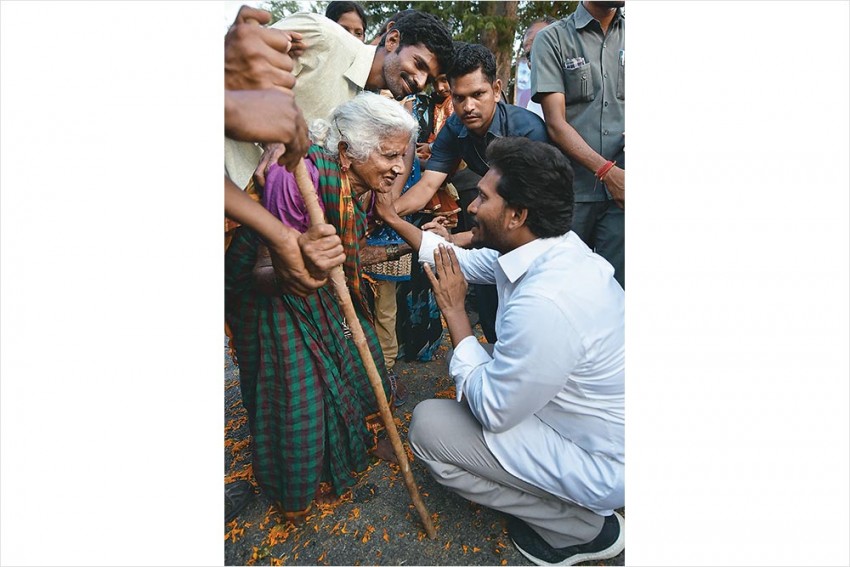 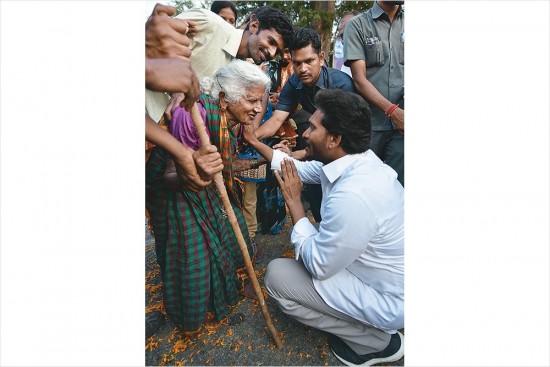 Less than three years after its founding, the YSR Congress fell short of power in Andhra Pradesh by just 2 per cent of the votes in 2014 . Its leader Y.S. Jaganmohan Reddy, in the middle of a padayatra ahead of the 2019 election, speaks to Outlook about the circumstances of his dramatic departure from the Congress, the problems facing the state today and what he intends to do. ­Edited excerpts:

What is this padayatra all about—3,000 km over six-seven months sounds big?

We are doing this padayatra because of the government of Andhra Pradesh. The CM has betrayed the people. What brought N. Chandrababu Naidu to ­power were major promises that swung the vote. He said he would waive all farmers’ loan repayments, knowing well that the agricultural loans came to more than Rs 87,000 crore in total. Earlier, both farmers and women were getting zero-­interest loans, enabled by an interest subvention from the central government, to which the state government was also contributing, and there was 97 per cent repayment to the banks. Then this man said, “Don’t pay, I will waive the loans.” Forget waiving the loans, he stopped paying the interest subvention. So the zero per cent scheme has collapsed and farmers are being charged 15-18 per cent as penal interest. All this has translated into the sown area in Andhra Pradesh dec­reasing over the past three-and-a-half years. The farmers are in the doldrums, suicides are taking place, and there is no appropriate support price for the produce, not even foodgrains. In this district (Chittoor), the farmers are not happy with the prices of sugarcane, tom­ato, groundnut and rice. The prices collapse when the produce is in their hands, and increase after it changes hands to the middleman, who wants to procure everything cheaply. This has only added to the farmers’ distress.

So is this a throwback to 2003, when your father started a padayatra? That was also a time of rural distress.

Yes, it was exactly the same thing. Naidu boasts of governance, but does not ­und­erstand what governance means. He has destroyed the farming community and the self-help groups. People affected by his decisions have begun to hit back. For everything—even loans to SC/ST people and pensions—people need the appro­val of the janmabhoomi committees he has set up in every village, sidelining the elected panchayats. These committees have become the most corrupt form of mafia government in the country…. ­Gujarat recen­tly concluded its windmill PPA (power purchase agreement) at a rate of Rs 2.41 per unit in an open auction, but Andhra Pradesh entered at Rs 4.84. The capital city has become a land scam. From the government to the janmabhoomi committees, everything is corrupt.

Incidentally, the biggest charge against you, levelled by your own former party, was also ­corruption.

As long as my father was alive, and as long as I was in the Congress after his death, there were no cases. The cases against me were filed only after I quit the party. And who were the petitioners? The Congress and the Telugu Desam Party (TDP)! In fact, TDP MLAs saved Congress CM N. Kiran Kumar Reddy when we moved a no-confidence vote after he hiked power tariffs. Everyone knew these were political cases. I was not an MP or an MLA, and was not even in Hyderabad then…. Sakshi isn’t a sham company—it is number eight in the country today and no investor has complained about suffering losses.

Was YSR, after that huge victory in 2009, a prime ministerial candidate?

I don’t know. My dad was a loyal congressman until his death. The Congress didn’t respect him after his death and filed ­cases against me. They did that bec­ause they could not see somebody differing from the Congress and succeeding. In 2009, minus his contribution—33 MPs from Andhra Pradesh—the Congress would not have been in power in Delhi. But the party did to its own loyal soldier what’s usually not done even to enemies. If they have lost Andhra Pradesh, it’s their own doing; it’s got nothing to do with me. They broke the state, joined hands with the TDP and didn’t implement the schemes that dad would have done.

Your father’s accidental death, the corruption charges, then you walking out of the Congress…was it a case of you being in a hurry to become chief minister?

The CM post was never the issue; in fact, I seconded Rosaiah for the position when they wanted him, and Kiran also became CM while I was in the Congress. Some 15-20 days after my father’s death, I visited the crash site. There was a huge, public condolence meeting. I walked a kilometre up the hill where the chopper had crashed. After so many years, when I speak about the incident, I still see the chopper pieces. When I walked down the hill, people around me were discussing how so many people had died for my fat­her, unable to bear the shock. “I will visit every house where people have given up their lives for my dad because I consi­der them members of my family” was the promise I made at the crash site.

"Chandrababu Naidu boasts of governance, but does not understand what governance means. He has destroyed the farming community. "

As I couldn’t chopper ride to 800 hou­ses in different villages, I went by car. I was stopped en route in every village to be greeted and the Congress leaders in Delhi couldn’t bear that. For six months, I had tried to convince them to give me permission to move, but they said, “Call them to a district headquarters and give whatever help you want.” I said nobody had asked me for any help. It was an emotional decision, I had given my word. Fin­ally, I went with my mother and my sister and told Madam (Sonia Gandhi) that we needed to do it. She said, “No. I’ll give you a central ministry later, I’ll make you CM, but you can’t do this.”

Six months later, we organised the Odarpu Yatra. It took two years and covered nearly 27,000 km. I just resigned from the Congress and they immediately accepted my resignation over the phone. Then the whole government ­machinery was deployed to defeat me in the Lok ­Sabha election, though I was a new candidate with no symbol. I won with a maj­ority of 5,45,000 votes, the highest in the 14th Lok Sabha. The Congress just couldn’t understand the emotional att­achment I had to that oath. Perhaps, had they given me permission to go and keep my word, this day would not have come. But their vengeance did not stop there—they joined hands with the TDP, the ­party my father fought against for so many years, and filed cases against me.

Every time an appeal was filed, the CBI would say something else. I was an MP and a CM’s son—where would I run away? Yet I was denied my constitutional right to bail and spent 16 months in jail.

Now, the BJP and the TDP are not getting along well, and the Congress may also want an alliance with you….

In Andhra Pradesh, it’s TDP on one side and the YSR Congress on the other. No national party has that kind of vote bank. Our stand is clear. The Opposition and the ruling party came together to break our state without our consent, promising on the floor of Parliament that they would give us special category status. That special status is dear to us. It would bring industrial incentives such as exem­ptions from income tax and GST. And then jobs will come to the state.

What if Modi offers special status?

We are praying that he will. If the PM is willing, it only takes the stroke of a pen. Unfortunately, it has not happened in the past four years and one reason is that Naidu is not asking. That’s the disappointing state of affairs we are dealing with in Andhra Pradesh.

Is there any possibility of going back to the Congress?

The Congress party is insignificant in our state. We don’t need them, especia­lly ­after they broke the state without the people’s consent. The Congress even failed to keep their deposits last year. Let’s see; I do not want to make negative comments about anybody at this stage.

What will be the big issues for the election in 2019?

Basically, the misgovernance of Naidu and the corruption in Andhra Pradesh.

Nationalism Made In USA