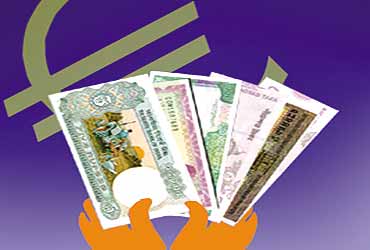 outlookindia.com
-0001-11-30T00:00:00+0553
Ever since the war on Iraq got over, the global media has been doing a postmortem of its real cause, presumably one between the US treasury and Saddam Hussein, and not between the two nations. The provocation seems to be the alleged conversion of US $2 billion, received from the UN under the food-for-work programme, into euros in November 2000—an action with far-reaching implications. While Saddam was guided by security considerations (the euro would insulate the money from being frozen), he had followers in some other opec members like Iran and Venezuela who made a switch to the euro from the dollar-for-oil payments.

So the euro's emergence as a rival reserve currency threatening the dollar's supremacy may have resulted in the war on Iraq. That the only open support for the US came from the non-euro UK, with the rest of Europe keeping their cool cannot also be overlooked. In the final analysis, the dollar touched 92 cents for a euro just for a day; last week it stood at $1.18 for a euro. Does this phenomenon hold a lesson for the international community in general and South Asia in particular? The answer is a definite yes.

The euro represents the culmination of the process of Europe's economic integration, started in the 1940s. That interferences like tariffs reduce the volume of trade and on a regional basis free trade could be beneficial was evident from the success of the German Zollavarein, an important stage in Germany's political unification in the 19th century. Immediately after World War II, Belgium, Luxembourg and the Netherlands formed a customs union under the banner Benelux. In 1952, France, West Germany and Italy joined Benelux to form the European Coal and Steel Community as it was recognised that economic boundaries (of the areas for the raw material for the coal, iron and steel industries) did not coincide with the political boundaries. Its success paved the way for the European Economic Community through the Treaty of Rome in 1957. Successive gains encouraged the European Union members to continue the process of economic integration to cover monetary and fiscal policies till it reached its finale in the euro in 1999.

Several countries in the past have resorted to manipulating the exchange rate mechanism to push exports. The cut-throat competition indulged in by Britain and France in the late 1930s, popularly known as 'competitive devaluation', led to the Great Depression and had disastrous consequences for the world economy. As late as in the 1980s, Japan had a highly depressed currency hovering in the region of 250 yen per one US dollar. The adverse impact on US industry, particularly automobiles, even led to TV ads like "Be American; buy American." It was President Ronald Reagan who called the bluff, sending a clear signal to Japan to apply the required correction: on September 25, 1985, the Japanese yen bounced back to 150 per one US dollar.

The euro's attraction is that it doesn't represent the currency of any single country, which would have put it in a position to dictate terms. From an economist's point of view, it's advantageous to deal with a lesser number of currencies since each time one converts a currency there is a huge loss. From the angle of comparative advantage enjoyed by some of the South Asian countries in export of certain items like tea in the case of India and Sri Lanka, jute in the case of Bangladesh and India, basmati rice and cotton in the case of India and Pakistan, it looks advantageous if SAARC countries could adopt a single currency—substantially enhancing their bargaining power together in the world market.

The rise in bilateral free trade agreements (BFTAs) should be seen in this connection. Outside South Asia, there are 38 such agreements.While the EU has 28 BFTAs with individual member countries, the European Free Trade Area (EFTA) has 12 with member countries. (After Great Britain found the terms joining the European Common Market unacceptable, a group of seven countries comprising itself, Denmark, Norway, Sweden, Switzerland, Austria and Portugal formed the European Free Trade Association in 1960, a purely economic association without political implications.)

India and Bhutan have had a BFTA since the 1950s, while the BFTA between India and Sri Lanka became operational about three years ago. BFTAs between India and Bangladesh and Maldives are under consideration. There hasn't been any tangible progress under the South Asian Preferential Trading Arrangement (SAPTA) being negotiated under SAARC. Hence, the BFTA initiatives between Sri Lanka and Bangladesh, Nepal and Sri Lanka and Nepal and Bangladesh. A recent study shows that since the Indo-Lanka Free Trade Agreement (ILFTA), India's imports from Lanka jumped from $45 million in 2000-01 to $67.2 million in 2001-02, a near 50 per cent hike in a single year.

SAARC members should now let economic issues top their agenda and start working towards an agreement on the lines of the EU's Maastricht Treaty—the ultimate objective being a single currency for South Asia. Almost five years of preparatory work preceded to make the euro a reality although John Major, UK prime minister in 1998, chose to dismiss the euro as an uninspiring name. With an unprecedented level of reserves, relatively low inflation compared to 10 years ago and lower interest rates on the one hand and India holding out the olive branch to Pakistan and a possible solution in sight for Sri Lanka's ethnic problems on the other, the time is opportune for SAARC nations to promote their economic interests, pushing political problems to the backburner.

(The author, a Chennai-based IAS officer, can be reached at sitharamgurumurthi@yahoo.com)

More Chinese Than The Other