Now the DMK has to humour its allies. Amma's fall isn't all bliss. Updates 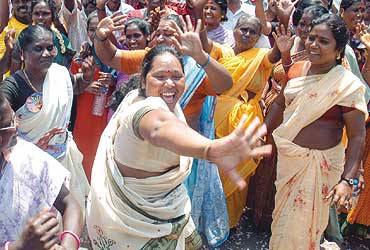 Instability is staring Tamil Nadu in the face. In a closely fought election, where victory margins have mostly been in the range of 2,000 to 3,000—sometimes as low as 14 votes—the Dravida Munnetra Kazhagam-led Democratic Progressive Alliance’s (DPA) coming to power is not without hitches. Though happy at the prospect of becoming chief minister for the fifth time, with only 96 seats in the 234-member assembly, Muthuvel Karunanidhi "is not really too pleased", as a confidant put it. The objective of unseating the aiadmk government may have been rather easily achieved with the DPA garnering 163 seats, but the 83-year-old DMK chief will not enjoy the prospect of sharing power with the Congress, which has emerged as a formidable player with 34 seats.

Insisting on the Congress merely extending support from outside would attract the tag of a ‘minority government’. The CPI and the CPI(M), with 15 MLAs between them, would be happy to stay out of the government, and the PMK, performing far below expectations (winning 17 of the 31 contested), has indicated it would also lend support from outside.

Contesting just 130 seats, the DMK began this election allowing for the possibility of a coalition—albeit not admitting it initially. It was midway during the campaign that Karunanidhi said the DMK was "open to the idea". With the DMK not even touching the three-figure mark, the state leadership of the Congress has sniffed power—for the first time since the K. Kamaraj government of 1967. Union finance minister P. Chidambaram, a key campaigner in TN who rationalised every sop listed in the DMK manifesto, has already made known the Congress’s aspirations. Two years ago, Congress leader E.V.K.S. Ilangovan had to apologise to Karunanidhi for suggesting that the party would seek power in an alliance and not be a spectator if the DMK chief installed his son M.K. Stalin as the CM.

Outlook has learnt that Stalin, for now, won’t be even made a minister. Karunanidhi believes Stalin should "devote himself to party work". In fact, it is the Congress that is likely to make a demand for deputy CM. Not long ago, its state unit had even suggested a Kashmir-like arrangement wherein the DMK and the Congress would alternate the CM’s post.

Watching this confusion unfold, the AIADMK with a solid block of 61 MLAs will make for a formidable Opposition along with the Dalit Panthers of India (2 seats) and the MDMK (6) which finally makes its debut in the assembly. Though the eight-month-old Murpoku Desiya Dravidar Kazhagam (DMDK) of actor Vijaykanth has won just a single seat (Virddhachalam), his party has polled a sizeable voteshare of 8.3 per cent across the state. In 70 per cent of the constituencies, the debutant party has polled in the range of 10,000 to 12,000 votes. The DMDK will surely have more bargaining power in the next election than the overrated MDMK. Whereas S. Ramadoss (PMK), Thol. Thirumavalavan (DPI) and Vaiko have region-specific and caste-specific votebanks, Vijaykanth has managed to emerge as someone who is above caste and beyond region.

So what really went against Jayalalitha and the AIADMK? First, the basic arithmetic was not with her alliance. In 2001, she had on her side all the major allies that are now with the DMK—Congress, the Left and the PMK. Second, the DMK manifesto and its slew of freebies played a major role. Jayalalitha, having initially debunked their practicability, started a belated mimicry of the DMK manifesto, betraying nervousness. Another factor that went against her was that more than 3 lakh government employees and their families voted with a vengeance that seems to have matched Jayalalitha’s when she dismissed 1.7 lakh striking employees in 2001. Added to this was the ire of the lottery workers with a membership of 3 lakh. Jayalalitha had banned the lottery, and despite repeated pleas, never lifted the ban. More than 95 per cent of such affected voters used the ballot to good effect as they did in the 2004 LS poll.

Besides, the AIADMK refused seats to 92 of the 135 sitting MLAs, including several ministers, effectively admitting that a majority of them had not delivered. These disgruntled legislators clearly didn’t work with enthusiasm for their party’s victory.
Yet the AIADMK isn’t distraught. Its leader and former MP T.T.V. Dinakaran told Outlook: "The situation isn’t that bad for us with 61 MALs. What cost us mainly was the arithmetic. The victory margins indicate that." Dismissing the role played by the DMK manifesto, he said: "We anyway matched it competitively." Despite not having the correct arithmetic, the aiadmk has not fared too badly. The DMK in 2001 won just 30 MLAs. Where Jayalalitha erred was in spurning actor Vijaykanth’s offer to ally with the aiadmk. He had sought 35 seats. Had the AIADMK , which contested 182 constituencies, made room for Vijaykanth, it could have turned the course of this poll. Shrugs an AIADMK leader: "We were confident of victory. So we spurned him."

It is for this reason that Karunanidhi comes across as more approachable and reasonable in the era of coalition politics. Unlike the overconfident attitude of Jayalalitha, Karunanidhi showed patience and large-heartedness in seat-sharing.

An ageing Karunanidhi, a faction-ridden state Congress and an unrelenting AIADMK will ensure that the spotlight does remain on Tamil Nadu for some time to come.