The odds are against the BJP, bar hara-kiri by the Congress 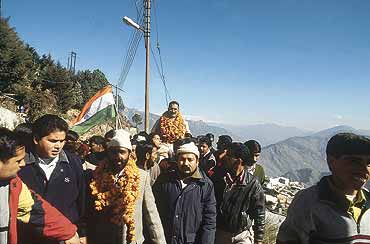 outlookindia.com
-0001-11-30T00:00:00+05:53
The very first assembly elections in Uttaranchal is likely to throw up some surprises. When it was part of UP, the hill districts which now comprise the new state were seen as a BJP bastion. It voted loyally for the party during the last three elections. But this time around Uttaranchal is seeing an anti-incumbency wave which will work in favour of the Congress.

The most popular estimate is that there will be a hung assembly with the Congress emerging as the single largest party. Even the BJP ranks claiming victory admit a tough fight and say the party will be ahead only by a thin margin of seats—nowhere close to the clean sweep in the previous polls. Congressmen, though, put out an optimistic figure of 30 out of 70 assembly seats in the state and hope to form a government with support from secular parties like the SP.

Carved out of UP only 14 months ago, the very coming into being of Uttaranchal as a separate state has drastically reconfigured the political and social equations in the new state. Seventy new assembly segments were created from 23 constituencies of Uttar Pradesh. This has reoriented voters who say they will no longer vote blindly for a party but have begun to weigh the influence of a candidate in his constituency.

Parties like the Uttarakhand Janwadi party led by popular leader Munna Singh Chauhan—who first raised the issue of a separate state in the UP assembly—and influential independents are expected to win at least seven seats. Further, the SP and BSP are expected to win about eight seats mainly in their conventional strongholds of Haridwar, Udhamsingh Nagar and Nainital, which has five assembly constituencies.

The issue of forming a separate state and the Hindutva wave which dominated the three previous elections have now been replaced by two key issues—unemployment and lack of development. So strong is the resentment against the BJP government for failing to tackle the two that the party's attempts to credit itself for the creation of a separate state has failed to whip up any strong sentiment in its favour.

It was mainly the unemployed youth who were active in the movement for a separate sate. But the BJP government which has been governing the state since inception has invoked much ire by threatening to cut government jobs as part of economic reforms. Says Ghanshyam Pokhriyal, a state government employee in the capital, Dehradun, "Let alone creation of new jobs, we're afraid the government will go in for privatisation and we may even lose our jobs. We want a change now."

But BJP leaders say they have worked out a formula for tackling unemployment. Says state general secretary J.P. Gairola, "We are ready with a blueprint for creating 50,000 new jobs after winning the elections. Further, a lot of hydel projects will be started which will also help address unemployment." But the disillusioned youth find it difficult to believe these assurances. "It's not that the Congress will solve our problems but we are disappointed with the BJP," says Ramesh Nautiyal, a Mussoorie student.

Faced with the uphill task of neutralising the impact of the Coffingate scandal, a major weapon in the Opposition's arsenal in these parts, Gairola is now busy fixing the campaign schedule of party bigwigs: A.B. Vajpayee, L.K. Advani to Arun Jaitley and Sushma Swaraj, whose visits he believes will boost his party's morale.

But it's not a smooth sail for the Congress. Infighting and unrest among party workers over ticket distribution has come even as the party is on the comeback. Confusion and protests ruled at the party's state HQs in Dehradun on the penultimate day of filing nominations. The drama of senior leader Satpal Maharaj threatening to quit if his candidates were not given tickets has brought to light the differences between him and the state unit chief, Harish Rawat.Cashing in on the situation, the NCP has been generous with tickets to BJP and Congress leaders denied by their party.

With the Hindutva wave missing and the anti-incumbency factor, the BJP's is an uphill task. Its only hope for a miracle rests with the Congress. Should that party inflict more damage on itself, the BJP could possibly win. But even then it will be close.

The Scenario With And Without Alliance