Home  »  Magazine  »  National  » West Bengal: chief minister »  ‘The CM Has Been Very Depressed And Is Taking Medication For It’ 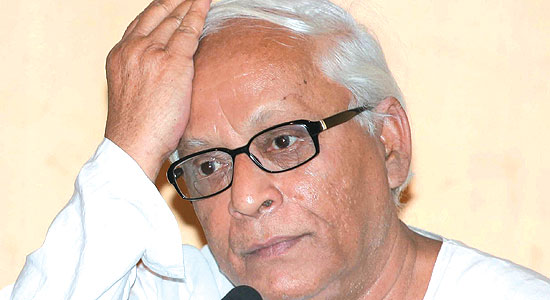 “It’s true he’s sick. But what his party is conveniently not mentioning is that it’s the party that’s making him sick,” a close confidant of West Bengal chief minister Buddhadeb Bhattacharya told Outlook, adding, “The fact is, he has suffered a nervous breakdown and has been on anti-depressants.” Attributing the CM’s health to “the pressure the party is putting on him by blaming him for its poor performance in the parliamentary polls,” the confidant observed, “He’s an honest and emotional man who feels alienated and let down by the party and this sense of betrayal has affected his health.”

Kshiti Goswami, leader of the CPI(M)’s Left Front partner, the Revolutionary Socialist Party (RSP), confirms Buddhadeb is a troubled man. “The chief minister has been very depressed and is taking medication for it,” Goswami told Outlook. He too blames the CPI(M) for the CM’s poor health. Says he: “The CPI(M)’s open disregard for Buddhadeb’s leadership after the debacle in the parliamentary polls under his leadership is having its impact. He’s very sentimental and is hurt that his party is treating him with such disdain.” Goswami confirms reports that there is a search on for a possible replacement for the CM. He, however, confides, “There is not a single suitable candidate right now on whom the party can bank on.”

Biman Bose, CPI(M) state secretary and Left Front chairman, had a slightly different take on the CM’s health. When asked whether it was true that Buddhadeb was suffering from a nervous breakdown, he had this to say: “He’s sick. But he’s recovering and very soon will be fine.” But has Buddhadeb been prescribed anti-depressants? Bose did not give a direct answer. “Actually, he is not accustomed to taking antibiotics. Whenever he takes antibiotics, his health breaks down. His body cannot assimilate antibiotics. He becomes completely immobile. And the effect continues for days. The medicine makes him lose appetite and because he’s unable to work he stops the medicine. The problem is, often he does not complete the full course.”

“The CPI(M)’s disregard for Buddhadeb after the poll debacle is taking its toll on his health. He’s hurt at the reaction.”
Kshiti Goswami, RSP leader

The symptom that all is not well with Buddhadeb is apparent. The chief minister’s office (CMO) confirms the CM, who is known to spend over ten hours in his office, has sliced off nearly three hours from his daily schedule. Political observers insist that though Buddhadeb still tries to appear confident, the swagger of his heyday has given way to drooping shoulders. And a frown has replaced the famous smile. But what really made everyone sit up and take note was his conspicuous absence from the PM’s conference on internal security last month in New Delhi on “health” grounds. “He was scheduled to attend (the conference) and leave his residence at 4 pm. But at 3:30 pm his doctor checked him and advised him not to undertake the journey,” explains Bose. According to him, the CM was down with viral fever.

If skipping the PM’s conference created a buzz, the news that the CM gave last week’s politburo meeting in Delhi a miss, again on grounds of ill-health, all but confirmed suspicions that something was terribly amiss. While the CMO claims not to be aware of the name of the CM’s doctor or drugs he had been prescribed, it maintains Buddhadeb had viral fever and was on antibiotics.

So what about replacing Buddhadeb as CM? Biman Bose says he “cannot comment”. And what are the names doing the rounds? He has this cryptic answer: “I cannot disclose that....”