The Closet Is Ajar

Homosexuality has been largely absent from popular cinema, but the idea is catching steam 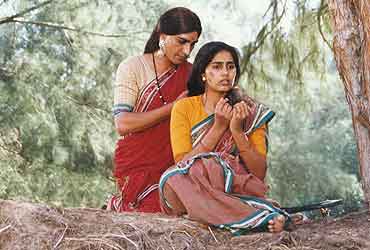 outlookindia.com
-0001-11-30T00:00:00+0553
At the turn of the 21st century, the rapid spread of satellite TV and new media technologies continue to transform the cultural practices of the urban middle class. There was excitement and apprehension in the early '90s as an endless diversity of images flowed into private and public spaces. The anxieties emerged directly from the increasing popularity of TV and the expanding space being devoted to the expression of sex and sexuality. Throughout the '90s, the Hindu Right and other organisations attacked the more transgressive representations of women's bodies and demanded stringent legislation and greater censorship.

Sexual speech came under special attention as newscasts, talk shows, sitcoms and a variety of TV shows challenged conventional family values and sexual normativity including monogamy, marriage and heterosexuality. In the mid-'90s, sitcoms (like Hum Paanch, Shriman Shrimati) featured characters who were unmistakably queer while mainstream films like Daayra, Darmiyaan and Tamanna challenged heteronormativity by presenting queer protagonists. The term 'queer' is being used to challenge the naturalised polarities of sex and gender like masculine/feminine, homo/heterosexuality and gay/lesbian. Reclaimed by queer activists, this once-derogatory slang now affirms that genders and sexual preferences are fluid, trans-gendered and transsexual.

Film and cultural studies argue that spectatorship is not necessarily predictable. Texts do not carry the same meaning for everybody. Instead various factors (like the viewer's location, history and predisposition) contribute to how images are read and interpreted. Therefore, we may suggest that all images are essentially ambivalent and allow themselves to be read differently by different people. Film scholar Andrea Weiss suggests that queer spectatorship is inherently contradictory as it embodies a desire to see while being perpetually invisible. Therefore, she writes, "it resembles a love-hate affair, which involves anticipation, seduction, pleasure, disappointment, rage and betrayal".

Explicit depictions of homosexual love have been largely absent from popular cinema except as minor sub-plots, comic relief or transitory suggestions in the song-and-dance sequences. The song routines of Bombay cinema have always allowed the plot and protagonists to escape conventional expectations and the narrative confines of the script. Therefore, transgressive desires frequently appear in these spaces. Take the Didi Tera Deewana sequence in a family entertainer like Hum Aapke Hain Koun? where two women enact a sexually charged performance. Or Choli Ke Peechey in Khalnayak where the otherwise chaste heroine called Ganga masquerades as a sexually assertive tawaif.

The debate on queer sexuality exploded into public life with the release of Deepa Mehta's Fire (1998) starring Shabana Azmi and Nandita Das. Fire is about the relationship between two sisters-in-law in a middle-class Delhi neighbourhood who fall in love. The posters of the film allowed the two women to occupy the same visual space that had conventionally belonged to heterosexual lovers. Predictably, a furious public debate ensued. The Hindu Right attacked the film as endangering "marriage" and Indian culture while others defended the human rights of queer people and freedom of speech and expression. 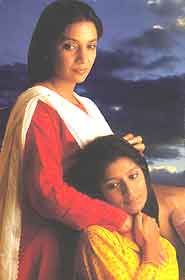 The arrival of this new way of seeing has opened older texts for newer readings. The buddy melodramas, for instance, could now be read by queer-friendly spectators to be evocative of homoerotic love. In films like Namak Haraam, Anand, Anurodh and even the masculinist Sholay, homoeroticism can be read between the overlapping lines of love and friendship. Both Namak Haraam, and Anand, allow two men to occupy the space conventionally reserved for heterosexual couples. In both films, Rajesh Khanna plays the role of the hyper-emotional, feminised man while Bachchan plays the intense, brooding lover consumed simultaneously by love for the other man and rage at finally losing him. The heterosexual love interests are so marginal to the plot that they hardly matter. In these parables of love and eventual loss, the feminised man dies in the arms of his distraught partner.

Bombay cinema rarely represents romance through sexual explicitness. Therefore, the cinematic devices used to represent love are similar, even identical, to those depicting friendship. Dosti (1964) is about the intense friendship between two poor and physically-disabled young men who struggle to survive in the city. The story unfolds through a progression of intimacy, separation and eventual reconciliation borrowed directly from the cinematic conventions of the romantic melodrama. Dosti could well be read as an allegory of homosexual love expressed through the metaphor of physical disability.

Today, public opinion around homosexuality is deeply fraught. In September 2003, the government told the Delhi High Court that Section 377 of the IPC (an 1860 law that criminalises non-procreative sex) could not be repealed as the Indian society's disapproval of homosexuality was "strong enough to justify it being treated as a criminal offence even where adults indulge in it in private". More recently, the Supreme Court has asked the government to reconsider the constitutional validity of 377.

Contemporary popular film expresses this conflicted ambivalence. Apart from rare affirmative films like My Brother Nikhil, Rules: Pyar Ka Superhit Formula and Chameli, there is an inability to express homoeroticism without invoking homophobia...Kal Ho Na Ho, for example, plays self-consciously on the overlaps of friendship and eroticism but maintains a certain "doublespeak" by incorporating homophobia (albeit humourously) through a disapproving character called Kantaben. Masti deploys a similar strategy whereby two men camp it up for a homophobic sexologist. The ambivalence about whether the audiences are being invited to laugh at homophobia or homosexuality remains unresolved.

Conversely, homophobia frequently becomes a space of eroticism. In Masti, one of the men ends up dating a beautiful woman who turns out to be transsexual. The horrified hero jumps down the building and escapes. In the next instant, he's shown cleaning his mouth with all manner of things including a plumbing device. The moment of discovery is ironically preceded by a sequence where the couple engages in romantic foreplay. Here, homophobia becomes the alibi for queer desires. Girlfriend also frames its narrative with a simultaneous address to the phobic and the erotic. For instance, one of the protracted lovemaking sequences between the two women appears as the jealous boyfriend's phobic imagining.Little wonder the film enraged both the Hindu Right and the queer community!

Bombay cinema's journey into the heart of desire has always been riven with paradoxes. The queer journey has only just begun.