The Clang From Doon 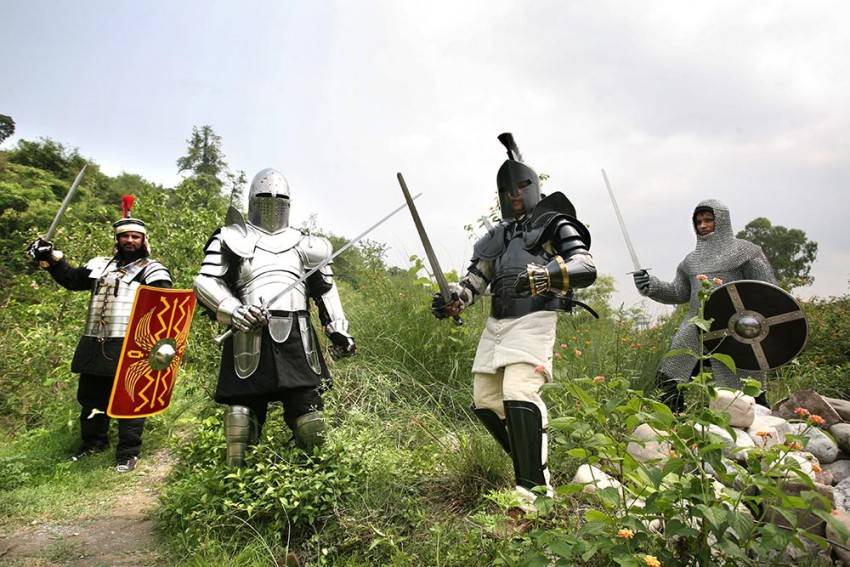 Jus’ Kiddin’
A mock­-up by Lord of Battles for the Hollywood props it makes
Photograph by Sanjay Rawat
Siddhartha Mishra June 30, 2016 00:00 IST The Clang From Doon 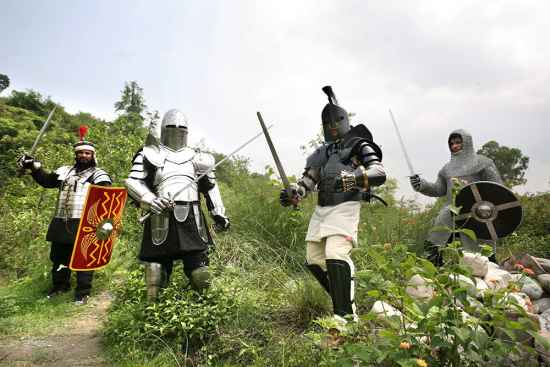 It is grim outside. Foggy, muddy, marshy. And in more romantic ima­gery and references that only Game of Thrones fans would understand, the bastard Jon Snow mounts his horse, his sword of ‘Valyrian’ steel dangling in its scabbard. But even fans who zoom in to spot and catalogue goof-ups won’t see a ‘Made in India’ marker—there just isn’t one, though they were in fact made in India. The swords appearing in GoT and an entire gamut of props in big budget Hollywood productions—including Obi Wan Kenobi’s and others’ outfits from Star Wars—are being churned out, hush-hush, in the Doon valley of Uttarakhand.

Even before GoT was a childhood dream in George R.R. Martin’s head, Windlass Steelcrafts LLP, of Dehradun, was churning out weaponry—khukris essentially, not the ones you poke people with at comicons. Today, though, Windlass is perhaps the largest maker of old-day weaponry featuring in films and series of the kind GRRM pens—and it has on its roster Hollywood blockbusters such as Troy, Kingdom of Heaven, Iron Man, 300 and Lord of the Rings. At its factory in Harrawala, on the outskirts of Dehradun, Sudhir Windlass, the 62-year-old owner, says it all began when the British asked his father Ved Prakash to make khukris for the Gorkha regiment. “We’d no clue how to go about it,” he says, laughing. “But we got people tog­ether and started manufacturing them. A lot of ‘cottage industries’ supplying khukris came up. But no factories—only my dad’s.”

That was in the 1940s. In the 1970s, the company started crafting ceremonial swords for armed forces around the world. It still supplies the British, Colombian and US forces, the American foray coming with an order for Civil War swords (1860 model), used for ceremonial purposes. Acquiring the Atlanta Cutlery Corp and Museum Replicas Ltd, both American firms, in the mid-1990s, Windlass stepped into the Hollywood amphitheatre with Ridley Scott’s Gladiator. The sword wielded by Russell Crowe as Maximus in that sword-and-sandal saga, and the helmet he wore, are still their biggest bestsellers in franchised replica. The firm has come a long way since, the clang and whirr and whoosh of steel being shaped, cut, beaten, ground and polished to a keen shine by close to 400 workers an indication of what might have gone into that last episode of GoT.

As it often happens in business, Windlass has an aggressive competitor in the wings (one that manufactures khukris, too). Lord of Battles, founded by Capt Saurabh Mahajan in 2005, with its factory in Saharanpur and a sampling unit in Dehradun, is one. “A lady from Australia gave me my first contract for chain mail for $1,500,” says Mahajan, a medieval history buff. Since then, the company has been associated with the GoT franchise for two seasons, besides doing projects like The Hobbit and TV shows like Merlin and Bastard Executioner. Casting a wide net, it has also worked on the Russian film Kolovrat and with the Royal Shakespeare Company for theatre productions. So far, orders for big budget productions have been fickle: “Fifteen, one, sometimes even a hundred,” says Mahajan. Material is sourced from across India, especially Punjab, Uttar Pradesh and Rajasthan. By his business strategy, theatre productions are economically viable and “their orders are small but it as good a market as the movies”. Mahajan says that orders typically range from $10,000 for a play to $200,000 for a movie. Besides props and merchandise, Lord of Battles manufactures souvenirs too, but as an “export-oriented” line. “No one will buy the products in India,” says Mahajan, the price for a scaled-down knight’s armour replica being 200 euros.

Working with Hollywood though, has its points. Mahajan mentions an ongoing project with Warner Brothers, which he cannot elaborate on due to a non-disclosure agreement. Windlass agrees: “They are very particular that their designs and specifications are not leaked. They guard their secrets closely.” Even the licences for selling replicas are limited: usually, it’s for one or two years. 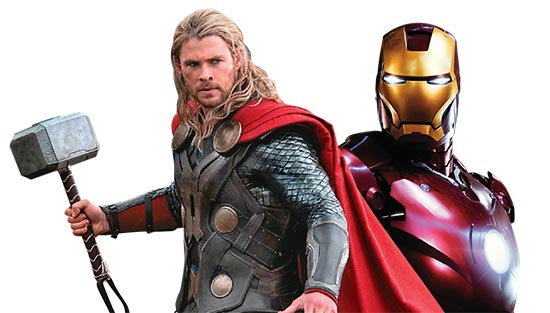 Captain America’s shield and other props—all from Dehradun

Both are full of praise for Hollywood’s experts. Windlass recounts the pleasure of working with ‘armourer’ Simon Atherton, who worked on Saving Private Ryan and Gladiator, and Oscar nominee April Ferry, now with the GoT franchise. Pointing to the mid-section of a knight’s armour, he says, “If they say four rivets here, there cannot be three.” Usually, they get six to nine months to get the products ready.

It’s precisely the lack of these qualities, they say, that keep them from dealing with Bollywood. Mahajan says Indian films make do with “substandard products”, and Windlass is disdainful that they “hardly do any research”. “They used a Spanish sword in Asoka!” he says. It’s not that Bollywood hasn’t approached them, though. Windlass says director Ashutosh Gowarikar tapped him for a film that was eventually shelved and currently he’s in talks with director Karan Johar.

The fact that merchandise more at home in the Irish marshes or fitted on Roman centurions of yore is manufactured in the hills of Uttarakhand sounds like a GoT conspiracy theory. Of course, it’s simply economics. Earlier, Mahajan says, the suppliers were in the Czech Republic, Poland and Ukraine; but cheaper labour in India allows lower pricing. In fact, Windlass’s profits have sent it on an acquisition spree: besides the American firms it acquired early on, it acquired Spanish sword-maker Marto in 2011 and even tried to acquire its closest competitor, WKC, a German giant.

It’s big business indeed that Windlass has extended beyond weaponry—now it’s everything from cutlasses, falchions, stilettos, duelling pistols, and costume items like chemises, pirates’ vests, monks’ habits, Blackbeard’s coats. Windlass estimates the market to be worth some $25 million. “To be truthful, no one knows. With phenomena like the Star Wars franchise, the internet and replicas of replicas out there, it could well be close to a billion,” he says.

Knives and swords of the famed Dama­scus steel of yore, hard but not brittle, and with its watered patterning giving swords and knives a distinctive look? Well, Windlass can make them for you. ‘Valyrian’ steel, a figment of GRRM’s imagination that needs no sharpening ever? It’s Windlass again that forged it into Longclaw, wielded by Jon Snow, who would have no clue to its provenance in the smithies that fashioned the Gorkhas’ terrifying khukris. You know nothing, Jon Snow!

Eleven Twelve, Get It Shelved