Home  »  Magazine  »  Arts & Entertainment  » Showtime  » Showtime »  The Chronicles Of Narnia: The Lion, the Witch and the Wardrobe

The Chronicles Of Narnia: The Lion, the Witch and the Wardrobe

Incredibly engrossing but intermittently so. It holds you, but the grip could have been even more firm. 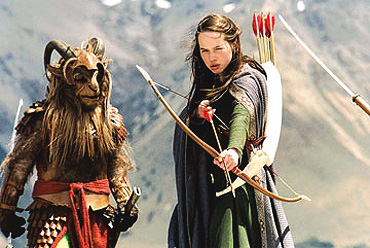 Namrata Joshi February 13, 2006 00:00 IST The Chronicles Of Narnia: The Lion, the Witch and the Wardrobe

As an adult watching a children's film, that too without having read the C.S. Lewis series on which it is based, all I can say is that Adamson's Narnia is incredibly engrossing but intermittently so. It holds you, but the grip could have been even more firm. Of course, there is the panoramic canvas, the breathtaking special effects and the incredible cinematography. But it doesn't take much to realise that the strength of the images actually lies in the written word. Lewis' story is impeccable in its mix of fantasy and reality. And so you have the dreadful reality of World War II and a bunch of siblings, the Pevensey kids, who are trying to escape its ravages. They are sent away to the peaceful countryside. Ironically, war follows them there as well. Not in reality but in the fantastic world called Narnia where they are transported by a magical wardrobe. The white witch has taken over Narnia and her dictatorship has turned it into a perennially frozen land which hasn't celebrated Christmas for the past decade. The kids, along with the king of Narnia, the majestic lion Aslan, help end her tyranny as they battle it out furiously with her in the epic climax. Doesn't take hard for any adult to guess that the war is actually an allegory for the WWII and the white witch is another face of Hitler, or any other totalitarian regime.

As for the kids, the tale becomes a lesson on laudable concepts like loyalty, courage, friendship and sacrifice. However, it also gets a bit too dark for the younger kids. The witch in all her fury can give many nightmares. All the actors are quite competent but the scene-stealer is the youngest kid Lucy and the icy witch Tilda Swinton. There are magical sequences which make your imagination fly—the portions which cook up Turkish delight and hot drinks, the talking beavers, fawns and centaurs, the emotional lion whose tears are more moving than the sight of a human crying, the onset of the spring after the winter, the thaw and the blooming flowers. Watching it makes one wonder why our own mythologies can't be turned into such successful brands. Our epic battles can be just as awesome if not more.