A graded contract system promises to make our cricketers richer, provided they deliver 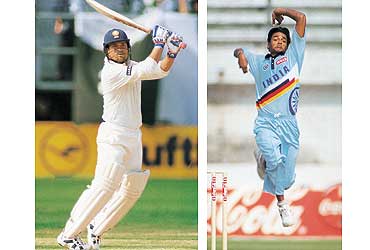 outlookindia.com
-0001-11-30T00:00:00+0553
In India, the 'contract system' is often a dreaded phrase, conjuring up visions of ruthless employers offering high performance-linked wages and little security to employees. The moolah is usually great, but you have to work harder consistently to earn it. But when Anil Kumble walked into a room full of senior Indian cricket officials at Delhi's Taj Palace hotel on July 18 with a proposal on a "contract system" for our cricketers, it was a case of 'employees' pushing the system to the 'employers.'

Kumble spun this one well. His spell, helped by an elaborate presentation on a laptop to bcci president A.C. Muthiah, Jagmohan Dalmiya, Mumbai Cricket Association's honorary secretary Prof Ratnakar Shetty, the board's treasurer Kishore Rungta and a few others, lasted for about 40 minutes. A month later, Muthiah announced the board wanted to change the existing payment system. If all goes well at the annual general body meeting on September 29, India will join countries like Australia and South Africa in adopting a gradation system, ushering in an incentive-based payment scheme where outstanding players will get more and backbenchers will bite the dust.

This is how the new system works. A pool of 20 players who have played a minimum of four Tests and 11 one-dayers will be formed by the bcci president, the selection committee chairman and some former national players. This pool will be graded into A, B and C categories, with different payments, on the basis of their performance in the last year and not seniority, and picked every September. So, a Harbhajan or a Laxman could rub shoulders with a Sachin in Grade-A, though indications are the officials are going to be very stingy with the number of players at that level. Says a board official: "Since the performance in the last one year will be taken into account, Ganguly may be put in the B-grade, but we're still considering whether that will be proper."

While there is no provision to drop any of the 20 in the middle of the year, a fresh player who's not in the pool could be picked for a series. He will be paid a match fee. (The match fee for the non-pool cricketers will be the existing Rs 40,000 per Test and Rs 25,000 per odis)

That's not all. In addition to the 'guarantee money', the players will get an 'appearance fee' per match which will be linked to seniority, and not the grade he belongs to. To fix this fee, the selected players for a series will be divided into groups based on their experience—like one to 10 Tests, 11 to 25, 26-50 and so on. Similarly for one-dayers, the players will be split into groups—one to 50 matches, 51-100, 101-150 and so on. Shetty says that the highest appearance money a player can get is Rs 2.5 lakh per Test or odi, while the least experienced player in a Test will get an appearance fee of Rs 80,000 and 75,000 for an odi.

This is based on the board's presumption that India will play at least 12 Tests and 40 odis in a year. The upshot: annual earnings of over Rs 1.9 crore for a Grade-A player like Tendulkar while a relative newcomer like Sadagopan Ramesh, who may be among the lowest earners in the pool, will get about Rs 35 lakh if he finds himself in Grade-C. If he's lucky to be in Grade-B after the Sri Lanka tour, his earnings will be around Rs 50 lakh.

The grading of the players is still under way. Those contracted players who are not among the playing 14 or 15 will not get any appearance money. There will also be bonuses for the team (see box).So, if this turns out to be a good year, with the tough SA tour as the starting block, a player like Sachin can earn well over Rs 2 crore. But, some lowly players may be earning less than half of what they are already getting.

Earlier, it was all very unfair, as Kumble told the board's finance committee in Delhi. He took Debashish Mohanty's example. Remembers Shetty: "He showed us how Mohanty, who was on the bench most of the time, earned Rs 1.01 crore in a year while Sachin earned just about Rs 6 lakh more. At the same time, injured players like Saba Karim and himself lost out on a lot of money simply because they were not playing."

There is an attempt by the bcci to make some sensible corrections at the domestic level as well. Under the existing system, a Ranji Trophy player gets Rs 6,000 per match which will be raised to Rs 10,000 at the league level, to Rs 12,000 in the quarterfinals, and Rs 15,000 in the semis and finals.

But the bcci's contract with the cricketers is not a one-sided deal. Though the players have got the more tangible portion of the pie, the board has got a list of obligations the cricketers have to sign. Some of the points that are still in the making are—thou shall keep yourself fit and not be injury-prone and agree to be medically examined every two months, thou shall play cricket whenever the board asks for any such favour, especially during fund-raisers for natural calamities, thou shall shun the press unless the board grants permission, thou shall interact with junior cricketers and give them tips, thou shall try and play as much domestic cricket as possible. All hinting at the beginning of a truly incentive-based system where performance is the king.

Placement Details Of The Top 10 Business Schools In India