The Chennai Express Of Film Schools 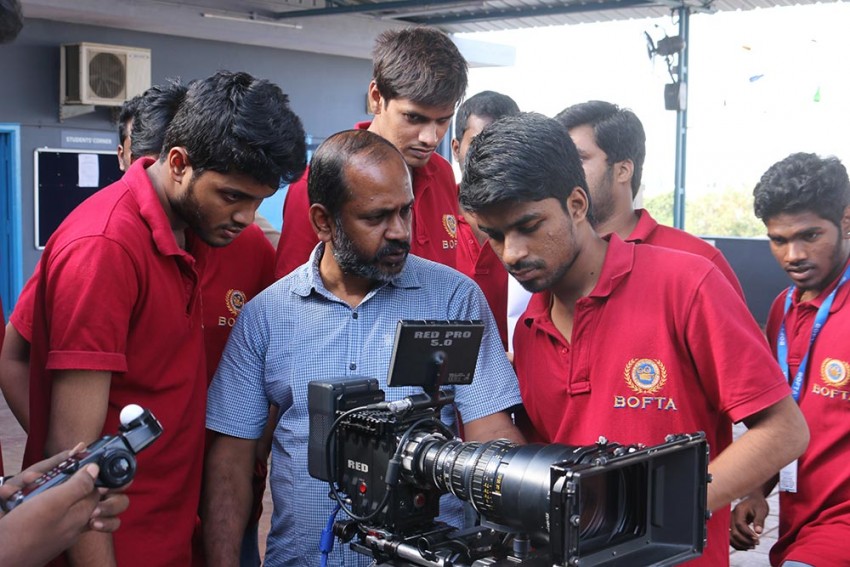 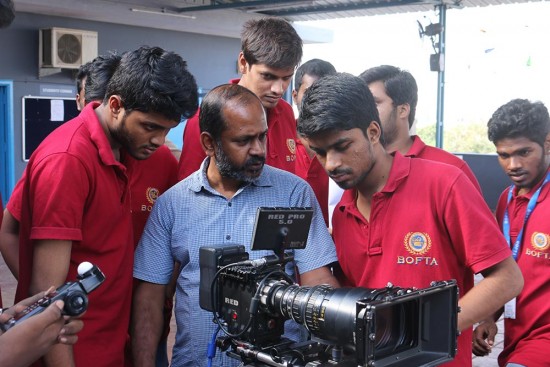 Where do engineering dropouts go these days? Try visiting some of the new film schools in Chennai, you’re bound to find some of them there—honing their skills in wielding an Arriflex camera or writing a screenplay. Chennai’s private film institutes have now become the finishing schools for many graduates and drop-outs from engineering colleges looking to pursue a career in cinema.

“Film schools have been the grooming grounds for the new talent that you have seen in South Indian cinema during the last decade. And inevitably, many of these people happen to be engineers, reluctant ones at that,” observes K. Hariharan, former director of L.V. Prasad Film and TV Academy. It’s a telling commentary on how engineering is often the choice of parents who push their protesting wards into the courses. Having completed the regimen (often with passable grades) under parental pressure, most graduates are now opting for careers they find exciting.

G. Janakaraj, 23, was eagerly waiting to complete his B.Tech in Computer Science. On passing out, he immediat­ely enrolled into the direction course of Blue Ocean Film and Television Aca­d­emy (BOFTA), founded by film producer and writer G. Dhananjayan. After completing the one-year diploma course in direction, he is working as assistant director in the sequel to the runaway hit Sathuranga Vettai. “I was not cut out for engineering at all. It was my parent’s choice and I joined the course reluctantly,” says Janakaran. “The mom­ent I passed out I enrolled in BOFTA and entered the world of cinema. This is where I belong and in another one year I plan to direct my own film. I may not bring home a fancy salary but I take care of my expenses like rent, food and transport. I am better off than many of my engineering classmates who are sitting at home without jobs,” he adds.

Babu Vijay’s journey has more of a backstory to it. He decided to be a director the day he saw the Tamil movie Ramana which was directed by A.R. Murugadoss, the director of hits like Ghajini and Thuppakki (Holiday in Hindi). That was in 2002, but since Vijay had to take care of his family’s construction business, he first completed his B.Tech, M.Tech and MBA to stabilise the business. He then entrusted it to his wife and a friend and joined BOFTA’s ­direction course to get an idea about film making. At 35, after 12 years of marriage from which he has two children, Vijay has joined as an assistant director to Murugadoss to realise his life’s dream. “Murugadoss readily picked me after learning how long I had waited and how I had prepared to meet his standards. My wife and my parents know that this is my dream and I have done my duty by making sure that my family gets its daily bread. The next step would be to direct my own film with the blessings of my director,” says Vijay.

Institutes like L.V. Prasad Academy, BOFTA and Cinematographer-Director Rajeev Men­on’s Mindscreen, are giving shape to such dreams. “We teach them the trade so they will be grounded when ent­ering this field. As for the tricks of the trade, those they will pick up on the job,” is how M.N.Gnanasekaran, the dean of Mindscreen Film Institute puts it. 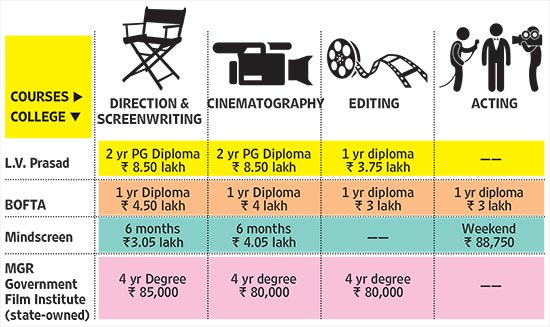 “We have doctors and dentists coming for our weekend courses as they want to learn and at least make a short film.”

The previous generation, which Hariharan and Rajeev Menon belong to, had only the option of joining state-run film institutes. But they came with their own cumbersome admission procedure and uninspiring syllabus. In contrast, these new age film schools are tailored for the requirements of modern day film making. The courses are also remarkably flexible. L.V. Prasad’s PG Diploma is two years long, BOFTA’s full time courses last for a year and Mindscreen packs it all within six months. The first two also offer short-term and even part-time weekend courses showing enormous adaptability to a time-starved yet more curious generation.

“We have doctors and dentists coming for our weekend courses as they want to learn and at least make a short film or two. But the most unique aspect of our learning model is that students get to learn from the masters in the field—top directors, cinematographers, editors and actors happily share their techniques and anecdotes,” says Dhananjayan.

Even lawyers have turned to the filmi corner. After exhausting his passion for law and practising for four years, Gautham Ramachandran decided to give his other passion, cinema, a shot. “I borrowed money to join the director and screenwriting course at Mindscreen and trained with renowned Tamil director Mysskin for five years. And here I am dir­ecting Niveen Pauly’s second Tamil film “Ritchie,” effused Gautham.

The main attraction of these private film institutes is the hands-on training they provide. At L.V. Prasad Film Academy, students learn at a real editing suite, watch actual shoots and learn sound mixing as the institute is located in the famous Prasad Studios. “Exercise films are shot on actually built sets with cameras used for actual film shoots and post-production happens in Prasad’s facilities,” points out a faculty member. “Many of our batch mates even sneaked in to watch a rerecording session by Ilayaraaja at the Prasad studios,” said S. Aravind who did his direction course after completing his graduation in visual communication.

Gnanasekaran of Mindscreen points out that the cinematography students learn from the cameras that are actually used in the industry. “Some institutes make do with a DSLR camera, which is the first equipment of any budding photographer. Our students use these cameras for their foundation digital photography course but when it comes to learning cinematography, we do not compromise on the equipment or the training.” 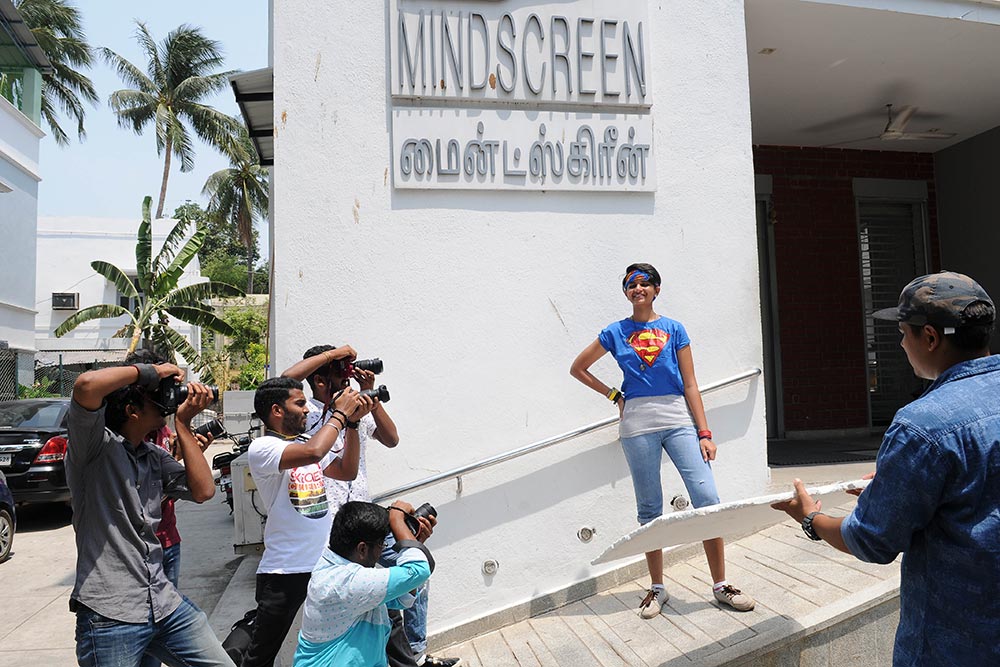 Photograph by R.A. Chandroo
The main attraction of these private ­institutes is the hands-on training and facilities they provide.

Bollywood cinematographer Swapnil Sonawane, who has filmed Angry Indian Goddesses and Newton, trained under Rajeev Menon on the suggestion of his cinematography guru Bobby Singh. He thought only a school run by a cinematographer could teach the nuts and bolts of filming. “For me going to Mindscreen was returning to school at 26,” says Sonawane. “The best thing is the curriculum gets tailored according to changing technol­ogy. So we got to use the latest cameras and lenses. Also, I am not good at Maths, but the veterans here broke it down easily for me so I could apply it to my work without getting boggled.”

Award winning director M. Manikandan joined Mindscreen to learn cinematography the professional way after having worked as a camera assistant already. “Before I came here I could handle a camera competently. But after coming here I learned how to tell a story through a camera. The Mindscreen training can be seen in every frame of my Kaaka Muttai (Crow’s Egg),” recalls Manikandan about the movie that won him name and fame. 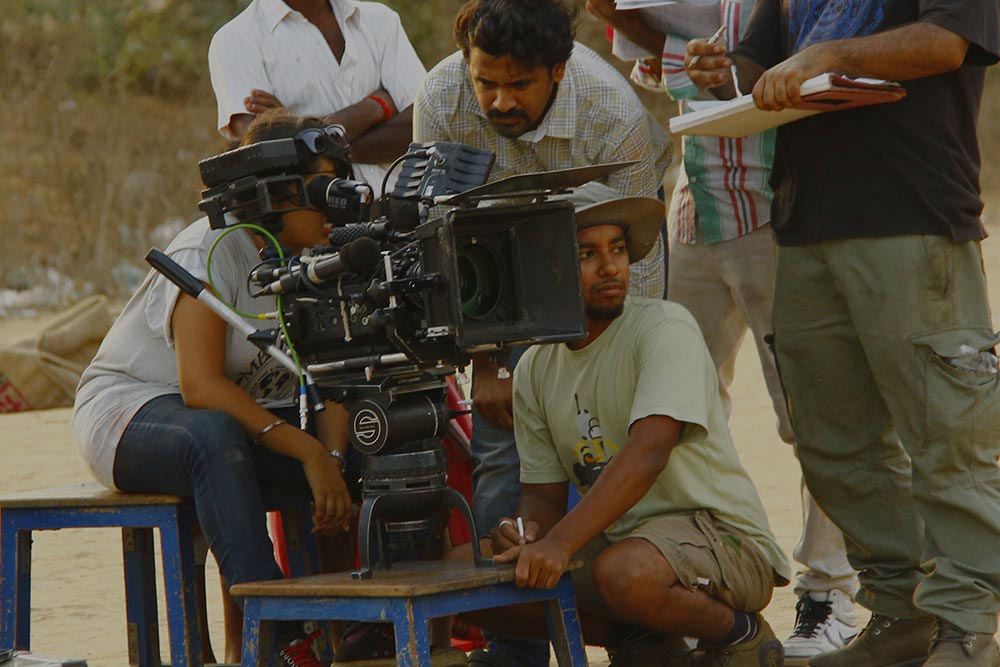 An outdoor shoot at L.V. Prasad Film and TV Academy

At BOFTA students can access films from a central server, have them projected in the classroom and also have a preview theatre where they can screen their short films. Every facility required for film making is offered under one roof in the four storied building at Kodambakkam, the heart of Tamil cinema. Dhananjayan agrees that it comes at a cost, but the knowledge transfer is more pragmatic and readily applicable than what a student picks up at an engineering college or in a visual communication course. “Most visual communication students end up here since they get bogged down by theory with hardly a few hours of practical applications. So if they need to learn anything about film making, only institutes devoted to film making can provide the solutions,” he says.

The other plus point is the small pool of students admitted to each course. The number of students in a class rarely crosses 20 so personalised attention can be given. And the admission process is only through elaborate interviews that explore if the candidate has the aptitude. “There was this young candidate who could not communicate with confidence. But he knew what he wanted and his replies were to the point. Rajeev and I quickly sensed his potential and adm­itted him. He was a quiet student but absorbed everything that was taught to him and came on top of the class. That is Rama Maruthi, the operating cameraman for Baahubali,” rev­eals Mindscreen’s Gnanasekaran.

In comparison to the short-term courses offered by private schools, the state-run MGR Film Institute offers a four-year degree programme at a competitive cost (see table). However, it is hamstrung by shortage of staff. There is only one cinematographer lecturer for the entire four-year course. “We may have the equipment but the human resources scene is pathetic,” admitted a faculty member. In the abs­ence of staff strength the institute, which is more than 70 years old, is una­ble to increase its student intake beyond 15 for each stream.

Hariharan, however, has a word of caution for film students. He says they are not fully aware of the imponderables and uncertainties that haunt the film industry. “Just as there are unemployed engineering graduates, there are an equal number of unpaid and underpaid assistant directors who stare at an uncertain future. Their dream film is just around the corner—even after spending years in the field. Unless the industry gets more organised and corporatised many such talented students would waste away.” He sounds hopeful though that the advent of Netflix and Amazon and Hollywood production houses would open up more opportunities for young Indian film makers—especially those who have invested time and money in such film schools.

This Test Is Only Getting Uglier