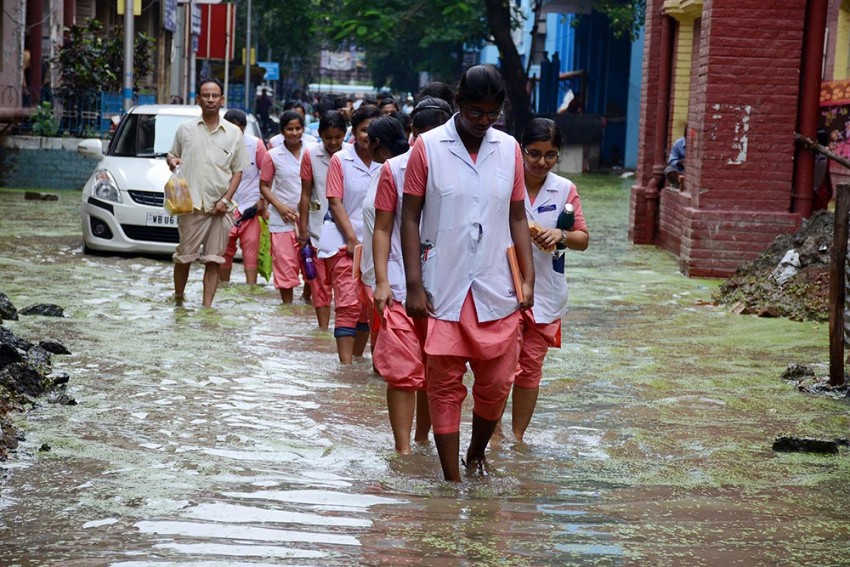 On The Frontline
Nurses after night shift on a flooded Calcutta road
Photograph by Getty Images
Arushi Bedi July 27, 2017 00:00 IST The Casualty Sisters 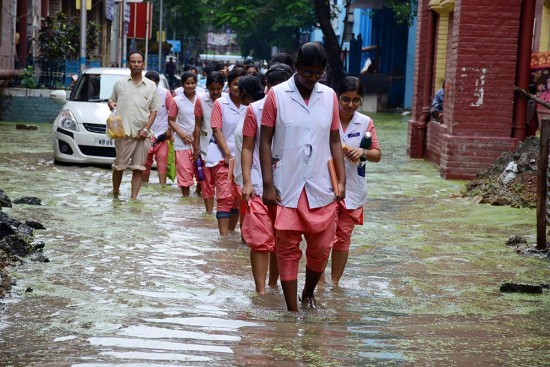 “When Dr Reddy was setting up Apollo, he assigned his most trusted nurse to be in charge of everything from floor planning of wards to scheduling surgeries, even designing the hospital logo.” These words from Evelyn P. Kannan, secretary general of the Trained Nurses Association of India (TNAI), shine a torchbeam on how things could have been. Reality needs no contrastive illumination, though. Nurses are far from the ‘ministering angel’ nobility of lore. They form a decidedly lesser caste—disrespect from doctors, paramedics, pat­ients and even government is routine, the pay is abysmal, perks non-existent, and prospects of growth minimal.

“Nurses form the backbone of the medical profession, they’re indispensable. From taking care of the patient, adm­inistering medication, even doing administrative work,” says Kannan. “Yet, the government as well as private institutes treat our job as second class.” Add to this the fact that the profession is dominated by women—an ingrained layer of patriarchal bias in the system shines through often enough.

Earlier this year, a nurse at AIIMS was herself admitted for a standard delivery procedure. Neither the surgical nor the anae­sthetic staff reached on time. Both mother and child perished. It takes tragic episodes like this—for a nurse who had worked with doctors for years to perish from neglect in her own hospital—for people to even pay any attention to the conditions of their existence.

Kannan’s claims are not exaggerated. Take the survey conducted by TNAI in 2011, which led to the defining judgement by the Supreme Court to fix wages of nurses in private hospitals. The TNAI report had said that almost all nurses in the private sector were paid dirt-poor salaries—ranging from Rs 4,000 to Rs 12,000 a month, mostly lesser than even the minimum wages of Rs 10,000.

The stark findings compelled the apex court to order the health ministry to constitute a committee in January 2016 to recommend remunerations for nur­ses working in the private sector on par with that of the public sector. The recommendations, sent to the states in September last year, are yet to be implemented. T. Dileep Kumar, president of the Indian Nursing Council, blames the lack of a legal framework to make these binding. “Health is a state subject. The Centre can only recommend, it’s up to the states to implement,” he says. Photograph by Getty Images
“The in-built patriarchy in our society is starkly visible in how nursing is treated. Doctors are mostly men and have a bigger say in policy.”

Nurses are frontline workers—the first line of response as soon as paramedics bring a patient to the hospital. Moreover, they often have to juggle administrative matters with their core job. Government guidelines put an ideal nurse-patient ratio at 1:4 in the general ward in both public and private hospitals. The ratio in our hospitals can range between 1:40 and 1:50.

The situation in government hospitals is abysmal: India sees around 80,000 nurses graduate from colle­ges every year yet vacancies keep piling up. Surekha Sama, vice-president, TNAI North, says some 30 per cent of government posts remain unfilled. The number is even higher in the private sector due to poor salaries. “The number of nurses as well as patients is multiplying every year. Yet, the government neither increases salaries nor the number of posts,” says Sama. A health ministry official concedes the point: “The needs and numbers of patients are growing. To keep up with this, the sanction strength for nurses needs to be increased.”

The logical effects follow: too much work. Most nurses are forced to work overtime and given a myriad of responsibilities—ranging from administration, patient care and giving medication, in addition to staff and surgical responsibilities. In the private sector, nurses are often forced to work 14-hour shifts, where they even have to do jobs like collecting due bills from patients, bes­ides their regular work, according to Merlin Mary James, a teacher in the Rufaida College of Nursing in Delhi.

She recalls an incident last year where a patient, right after a Caesarean, died in the post-op recovery room. The fuming relatives, unable to find the doctor who had performed the surgery, beat up the nurse who was taking care of the pati­ent’s post-surgery routine. And in a disputed payment situation, also in 2016, a nurse was beaten up by hospital minders for returning without the money after the patient refused to clear his bills.

Nursing has always been a female-­dominated vocation: about 90 per cent of nurses are women. Harish Kajla, head of the AIIMS nursing union, cites this as a major reason why nurses are not given equal rights. “The in-built patriarchy in our society’s functioning is starkly visible here. Doctors are mostly men and thus are able to have a bigger say in policies and payments,” he says.

Conditions akin to serfdom are visible even in the nursing hierarchy and promotions. In the public sector, Kajla says a nurse, in her career of 35 to 40 years, may get only two promotions. “Even then, sometimes, like with departmental promotions, this only means an inc­rease of Rs 200 in their pay,” he says.

Priya, a nurse in the general ward of PGI Chandigarh, recently got her first promotion after working for 10 years. Before this, she did get a few raises due to modified career progression schemes  but never a promotion. “I knew this was going to be the case,” she says, taking solace in the fact that she works in a premier government institute instead of the private sector where even such promotions are not guaranteed.

In June, the government decided to downgrade the post of assistant nursing superintendent from a group A post to a group B post. A coordination committee constituted by the health ministry also removed the post of deputy nursing secretary in all premier INS­titutes, including in JIPMER and PGI Cha­ndigarh. Kajla says the union sent many letters to the ministry to know why these posts were downgraded, with an appeal to go back to status quo ante. Meetings too were arr­anged, but all in vain.

In March, after months of appealing to the ministry, the AIIMS nur­ses union went on strike to protest low wages. Only after the strike was called did the ministry take cognisance of the requests. “We tried all means available to have our voices heard, but we were ignored. That’s why we had no option but to go on strike. That’s the only time the government wakes up to listen to us,” Kajla says.

The conditions in India are so forbidding, it’s no wonder nurses want to go abroad. Most nurses hope to work here for a few years before looking for options overseas. While no formal data is available on the number of nurses migrating, estimates suggest 30 per cent of nurses in Indian hospitals choose to migrate every year. “Nurses realised that they get not only better pay overseas but more respect and, most importantly, better career progression,” says Sama.

Indian nurses migrate to various parts of the globe—though that space is shri­nking too. The TNAI has been officially appointed by the health ministry to oversee all migrations of nurses from this year. “The feedback I receive from different countries all suggest that Indian nurses are among the most hard-working. If only this talent could be recognised within the country as well,” Sama adds ruefully.