The Caste Of Poll Saffron

Wary of SP-BSP unity with 2019 on its mind, the BJP has a new poll trick: divide up the OBC quota, pitting the ­relatively better-off ­sections against the rest 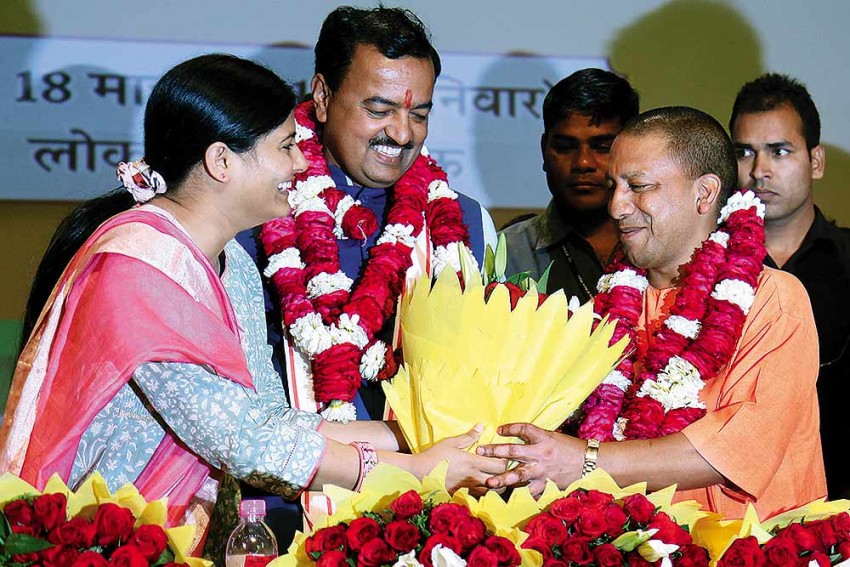 Once Lucky
(From left) Anupriya Patel, Keshav Maurya and CM Yogi in Lucknow
Photograph by Naeem Ansari
Bhavna Vij-Aurora May 10, 2018 00:00 IST The Caste Of Poll Saffron 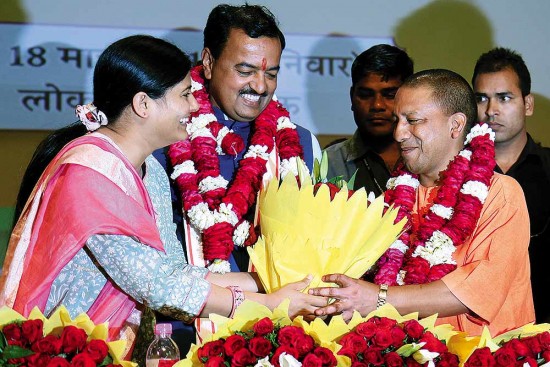 The national political thermometer may have been showing higher readings from Karnataka by then but, on March 20, a lot of fuel stocks for future heat were beginning to be deployed at a quiet meeting in Delhi. Om Prakash Rajbhar, Uttar Pradesh’s minister for backward classes welfare, had finally got the appointment with BJP president Amit Shah that he had long sought. His agenda: to impress upon Shah the urgent need to slice up the OBC reservation pie in UP. It’s the next big idea in the BJP’s arsenal, meant to counter the potential consolidation against it by a united Samajwadi Party-Bahujan Samaj Party phalanx.

Here’s how it works. Simply put, the idea is to take the most populous umbrella caste segment in India’s most populous state—OBCs are perhaps 50 per cent of Uttar Pradesh—and put it under the lens. Thus, first distinguish between the great variety of shades on the backward class palette. Then group them in three separate slots according to affinities in socio-economic indices—who is less or more poor, who has less or more land (or none at all), who has better education levels et al. And finally carve up the 27 per cent OBC quota and make available three separate portions to each.

In a way, it’s a variation on the old idea of the four-way division of Uttar Pradesh—except that it would be along the lines of social geography rather than pure territory. The motives remain the same. Earmarking a share for the extremely backward and most backward communities is an urgent matter, Rajbhar told Shah. The dominant castes among OBCs like the Yadavs, Jats and Sonars were hogging most of the benefits. Besides, of course, there’s the political benefit of raiding the enemy’s resources from both flanks.

Rajbhar claims he had earlier tried to convince chief minister Yogi Adityanath about the idea several times, but did not get any response. “Finally, I had to go to Shah. On April 11, he called both Yogi and me for a meeting, where it was decided the quota within quota will be implemented. Shah assured me the timeline for implementation will be at least six months before the 2019 election,” Rajbhar tells Outlook.

“The OBCs, MBCs and EBCs are slippery votes no party can take for granted, and they seem to be slipping out from the BJP’s hold,” says a UP BJP leader from the Kurmi caste.

Of course, like with most socially progressive measures, some hard-knuckled jockeying for advantage lay behind it. What the leader of Suheldeo Bharatiya Samaj Party (SBSP), an ally of the BJP in the UP government, did not say is that it was a quid pro quo deal made at the March 20 meeting with Shah. With his party contributing four MLAs to the assembly, including him, Rajbhar had threatened to boycott the Rajya Sabha election, and his party’s four votes were crucial for the BJP to get all its nine candidates through. That’s how Shah agreed to the April 11 meeting.

Though his own (Rajbhar) community accounts for just about three per cent of the state’s population, its political value is believed to be disproportionately in excess—a fact that was used by Rajbhar to his advantage. With some support from “friendly communities”, Rajbhar claims to be able to influence results in as many as 62 assembly seats. It’s been a rough relationship between Rajbhar and the BJP, but it’s one the party has had to endure, symptomatic of the tightrope the saffron party has to walk to maintain the delicate caste balance in UP. 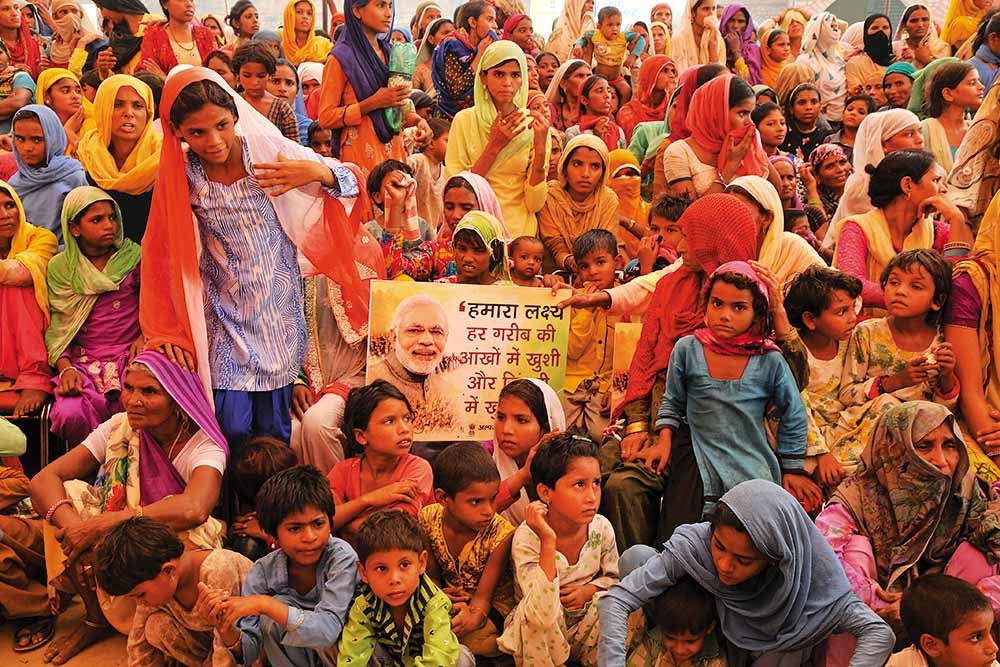 The BJP has begun ­holding “progress panchayats” with Dalit and Muslim communities in an attempt to get rid of the anti-Muslim, ­anti-Dalit tag before 2019

Judging by the centrality of UP, the BJP knows its big picture for the Lok Sabha polls suddenly looks somewhat hazy. After the other parts of the political spectrum started moving in tandem, its own carefully crafted caste calculations seem to be going awry. It had managed to harness the anger of non-Yadav OBCs and non-Jatav Dalits in its favour in 2014 and they ext­ended their support through 2017. However, now they want the BJP to fulfil the promises made to them.

The defeat in the Gorakhpur and Phulpur bypolls—­attributed in substantial measure to the discontent among backwards and Dalit anger—is forcing the BJP to revise its strategy. Moreover, with the SP-BSP alliance appearing to be more long-lasting than had been expected, and likely to sustain till 2019, caste equations will have to be rethought around that.

Senior BJP leaders concede they still haven’t got a handle over it. “It’s a complicated situation,” says a BJP general secretary. “Yogi and his ministers visiting Dalit homes and eating food is not going to help much. Mere symbolic gestures don’t work anymore. Yet, efforts have to be made.” In more concrete terms, the party is also talking about fixing quotas within the 21 per cent earmarked for Dalits in government jobs and educational institutions, in addition to reconfiguring the 27 per cent OBC quota.

“These are desperate measures,” admits the general secretary, who has been in the thick of things. “The CM has announced the proposal to fix quotas within the quota in the assembly. But it’s easier said than done. Dominant castes like Yadavs and Sonars are not going to be happy about it. Even among the EBCs and MBCs, it’s going to be difficult to decide which caste will get what share. In the final analysis, nobody is going to be pleased.”

Disillusioned with lack of reservation benefits accruing to them, many OBCs have tried to enlist themselves as Dalits to avail the quota there. In fact, the government had proposed to include 17 OBC sub-castes in the Scheduled Caste (SC) category. These include Kahar, Kashyap, Kewat, Nishad, Bind, Bhar, Prajapati, Rajbhar, Batham, Gauriya, Turha, Majhi, Mallah, Kumhar, Dheemar, Dheewar and Machhua communities. “Little do they realise even that’s not going to help. If there are Yadavs preventing them from taking their rightful share in the OBC zone, there the Jatavs won’t allow them,” says a Kurmi BJP leader from UP.

According to him, the party has not been able to come to grips with the fast-changing equations. “It may not sound politically correct, but the OBCs, MBCs and EBCs are slippery votes no party can take for granted, and they seem to be slipping out from the BJP’s hold,” he adds. Traditionally, they have not been part of the BJP’s votebank, but Shah had successfully reached out to them.

Traditionally, the BJP had some hold over big OBC castes like the Lodh as it propped up leaders like Uma Bharati and Kalyan Singh. This was following a report submitted by a committee, headed by then general secretary K.N. Govindacharya, that laid emphasis on “social engineering”. The committee was formed after the BJP failed to form the government in UP in 1996 with a 33.3 per cent voteshare. The BJP was stuck at around 33 per cent voteshare in five consecutive elections and was unable to break the barrier.

“The problem is the BJP has been unable to nurture any leaders from among the backwards,” says a central BJP leader. “With the exit of Kalyan Singh (now governor of Rajasthan) and Uma Bharati’s role becoming almost negligible, the party has failed to cultivate another Lodh leader. Among the few OBC leaders it has nurtured is Keshav Prasad Maurya, who should have rightfully been made the CM. But the party went with Yogi, who reinforced the party’s image as a savarna party of Brahmins, Bhumihars and Thakurs.”

Maurya, who represents the Kushwaha backward community—comprising six per cent of UP’s population—was elevated as state party chief before the assembly polls. He replaced Lakshmikant Vajpayee, a Brahmin. Maurya’s task was clearly cut out: to consolidate support among non-­Yadav OBC categories and also among Dalits. “He worked tirelessly on the ground. When the party swept UP, everyone expected him to be made the CM, but he was made one of the two deputy CMs. That did not send a very positive message to OBCs,” the BJP leader avers.

Was Yogi the wrong choice?

Many among the BJP central leadership now believe appointing Yogi the UP CM was a mistake. The saffron-robed chief priest of Gorakhnath temple was hand-picked by the BJP top brass to lead the state into the 2019 Lok Sabha election on his perceived ability to consolidate the larger Hindu votebank.

He lived up to the promise as he chose to become the first CM to visit Ayodhya and pay obeisance in the makeshift temple, with the old catchphrase, ‘Mandir wahin baneyenge’, again ringing in the air. He proposed a 100-metre-tall statue of Lord Ram on the banks of Sarayu as part of a Navya (new) ­Ayodhya township. It all seemed to be going as per plan, building up to the finale of temple construction. “If the top leaders had their way, they would have ensured temple construction at least began before the Lok Sabha election. In fact, there’s still time for that. It all depends on the Supreme Court,” a UP BJP leader tells Outlook.

“The BJP has been unable to nurture many leaders among the backwards. Keshav Maurya, one of the few OBC leaders, should have been made UP CM, but the party went with Yogi,” says an insider.

In just over a year, though, Yogi’s image as a Thakur strongman may have taken over. “The plan was to project him as a Hindu leader, with all castes identifying with the larger Hindutva umbrella. We thought his image as a priest would carry everyone along, and his strong image project a good administrator. But it doesn’t appear to be the case,” the UP leader says.

Party leaders are still trying to figure out what went wrong and how the party’s Hindutva icon transformed into the embodiment of ‘Thakurvaad’. There are allegations that only people of Yogi’s community are getting plum government positions, especially in Gorakhpur, the constituency he nursed for five terms as MP. Thakurs or Rajputs comprise nearly eight per cent of UP’s population.

“With Yogi, the Thakurs started feeling entitled, just like the Yadavs did during SP rule,” a prominent BJP office-bearer reveals. “Yogi may not be actively promoting the Thakurs, but there is a growing perception that they are being favoured. This is something Yogi has to control. He has already been cautioned regarding this by the central leadership.”

Calling UP a state that’s not easy to understand and administer, the leader continues: “Not only is the caste calculus complicated, the state itself is highly political. Bihar is the only other state that comes close. The main profession in these states is not agriculture but politics. Amit Shah got it right twice. The difference now is that the party is in power and egos have to be handled. Also, the effects of Yogi raj need to be countered. It’s a tall order.” That’s why, instead of Mandir, or perhaps to supplement it, a mini-Mandal is also being crafted.