The Caravan Rumbles On 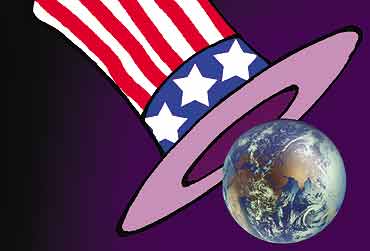 outlookindia.com
-0001-11-30T00:00:00+0553
Now that President Bush has categorically refused to allow the US defence department to prepare contingency plans for the invasion of Syria, the world has heaved a sigh of relief and turned its attention elsewhere. But relief on this score is decidedly premature. Bush has made it clear that he's ruled out the use of military force only for the time being. Syria has an opportunity to meet US demands voluntarily. He and Donald Rumsfeld have left the world in no doubt that if Syria does not, it will be forced to do so. British foreign secretary Jack Straw said as much after a meeting with Syrian President Basher Assad on Tuesday last week. When reporters asked whether London, like Washington, regarded Syria as a rogue state, he said: "We use different descriptions. Syria has an opportunity to prove it is not in that category."

Why has the angel of retribution shifted its gaze so suddenly to Syria? This country was not among the three designated as the 'Axis of Evil' by Bush during his state of the union message last year. During more than eight months of build-up to the invasion of Iraq, no one in the US or UK mentioned a single word about Syria. Even Syria's forthright opposition in the Security Council to any resolution that even indirectly authorised an invasion of Iraq produced no murmurs of disappointment or disapproval from either of the self-appointed architects of the new Middle East.

All of a sudden, literally within days of the fall of Baghdad and hours of the end of resistance in Tikrit, Rumsfeld, Bush and other US spokesmen have accused Syria of all the crimes that Saddam was supposed to have committed, that justified his overthrow. It is manufacturing chemical weapons; it has 'links' with terrorists operating in Palestine and elsewhere; and it's sheltering senior members of the 'rogue' Saddam regime. It therefore meets all the requirements for becoming the next candidate for 'regime change'.

Nor has the US confined itself to making verbal threats. Last week, Rumsfeld asked two staff members, Doug Feith and William Luti, to prepare contingency plans for military action against Syria. The two had played a decisive role in persuading first their boss, and through him the Bush administration, to invade Iraq. Only Bush's unambiguous decision to leave Syria alone for the moment, possibly triggered by advice from Colin Powell, has halted their labours.

Why is the US targeting Syria now? For an answer one must look at the remorseless logic of the imperialist course upon which the US has embarked. Whether Washington realises it or not, it has already taken the first steps towards becoming the colonial power of the 21st century. Notwithstanding Bush's repeated assurances that the US has no intention of staying in Iraq longer than is strictly necessary, few have doubts that this 'short time' could in fact be quite long. Law and order has collapsed completely in the country, infrastructure has virtually ceased to exist. And summer is around the corner. Soon millions of Iraqis will face the ravages of the worst heat in the world without safe drinking water, sanitation and possibly food. They need a working government not in weeks but in days.

But the possibility of a return to stability is dwindling day by day. Iraq has no army, no police and except in the Kurdish areas (liberated in 1991), not a single widely accepted leader. The prospect of reconstituting the state entirely from within looks remote. The first meeting of future Iraqi leaders at Nassiriyah was a shambles; the Supreme Council for the Islamic Revolution in Iraq, the head of the Shias, did not even attend. Thus if Iraq is to be saved from chaos, there is no alternative to an extended period of military rule. The US is the only country willing, perhaps even eager, to take up the challenge.

The US will not only have to restore law and order, an onerous enough task, but is likely to face attacks from disaffected elements that will range from former members of the Iraqi army, to Saddam loyalists, to Arab nationalists drawn from Iraq and a score of other countries. These elements will be almost impossible to suppress because Iraq is a landlocked country with four neighbours whose people will provide ready sanctuary to the insurgents.

This fear, born of an entirely new experience of having to govern a territory within hostile land frontiers, is what has made the US turn its baleful glare upon Syria. Syria had made no secret of its opposition to the military invasion of Iraq. Before the war, it sold night vision binoculars to the Iraqi army. The bulk of the thousands of Arab fidayeen who poured into Iraq during the war came from across the Syrian border. Most, if not all, of the Iraqi leaders have tried to find sanctuary in Syria, and many have succeeded. There is thus every reason for the US to believe that tomorrow's fidayeen will operate from sanctuaries in Syria. This will make the task of containing 'terrorism' and building a democratic new Iraq impossible.

Syria may well try to meet the US half way, but it is unlikely that it will succeed in stopping the guerrillas from basing themselves there. For there are literally hundreds of miles of empty desert border between it and Iraq that anyone can cross anywhere. US-Syrian relations are therefore unlikely to improve. But this is only the first of Washington's problems. A much bigger one will be the Shia fundamentalists who will seek to merge eastern Iraq with Iran. The US is thus being caught in the remorseless logic of expansion that plagues all empires with land frontiers. It will have to expand constantly simply in order to maintain a constant level of security. What this could mean for the Middle East is best left to the imagination.