Home  »  Magazine  »  Business  » Virtual Market »  The Buzz Around That Celeb Is Unreal!

The Buzz Around That Celeb Is Unreal!

Humans, prophets or ­pedestrians, have ­always had ­followers. The social media age offers dummy followers at a price. And there’s a ­profit too. 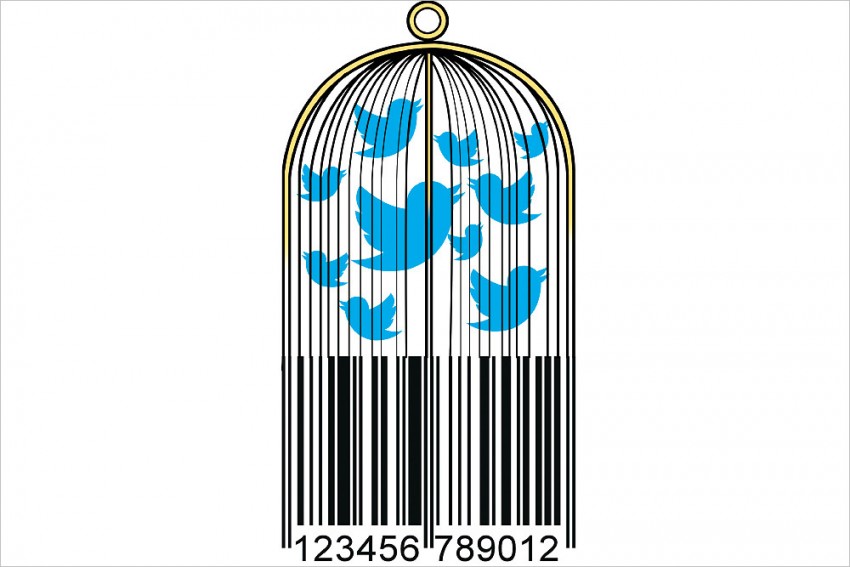 Illustration by Sajith Kumar
Stuti Agarwal March 02, 2017 00:00 IST The Buzz Around That Celeb Is Unreal! 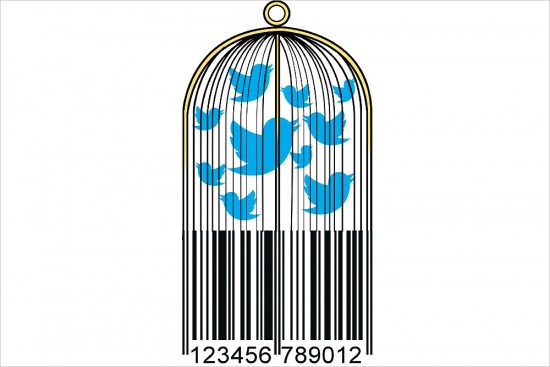 We’ve seen it coming at us in the movies, sneaking ­under the door unnoticed—well, almost. They call it product ‘placement’, a charmingly honest little euphemism, because that’s what is being done. Brands are ‘placed’—surreptitiously—within the shot, among the props. Your favourite above-50 screen Adonis quaffing a cola. A street fight next to an ad hoarding, a blinking shop sign, anything that qualified in someone’s eyes as subtle, indirect messaging. But the world is too fragmented now to be caught ent­irely in grand 70 mm signals—it’s electronica­lly alive all the time, at many levels. Subliminal advertising too has gone through this prismatic shattering into all these new combos of image and text: Instagram, Twitter, Facebook, what not.

The techniques are unchanged, though, and often as unsubtle as before. You may have happened to notice how cricketer emeritus Virender Sehwag morphed from the inexpressive boy from Najafgarh of his playing days into the social media master-blaster we see now. How the star, who joined Twitter for fun, became a sensation with his Sehwagisms. Well, it’s not all fun and games, apparently. Sehwag says he made about Rs 30 lakh in the last six months, just through his tweets!

How? Just the way his power-hitting masked his skill with the bat, his flowing witticisms hide the fact that he’s using his tweets cleverly to promote brands. His recent tweet, for instance, congratulating Ravindra Jadeja for winning a man of the match award against England, also pats PayTm, the sponsors of the Test series, on the back. He tweeted: ‘Wah Jaddu Bhai! Hamare paas toh 2,000 ke chhutte nahi hai aur aap @Paytm mein 1 Lakh le gaye. Thoda hamare Paytm mein bhi transfer kijiye’ (Wow Jadeja bro, I don’t even have change for Rs 2,000 and you took Rs 1 lakh in your @Paytm. Tranfer some in my Paytm also). Two mentions within 140 characters, worth more than their weight in gold.

Sehwag may be the bigger fish, but there are plenty more swimming in the virtual sea, a whole celeb pecking order, each looking to climb up the food chain. But on social media, what you see is not necessarily what you get. Since good money is beginning to slosh around, it has opened up an ancillary industry that feeds off it—an invisible ensemble that creates the necessary illusions and provides much of its apparent life.

First, the straight and narrow. Karan Talwar, more popularly known as Bollywood Gandu, defines it simply: “What one needs on social media is a good and steady number of followers.” Thanks to his wit, Talwar has amassed a Twitter following of 1.6 million since he started in 2010. But for a celeb, it doesn’t matter if you don’t have sparkling wit. If slow, organic growth is too time-consuming, you can simply buy followers. 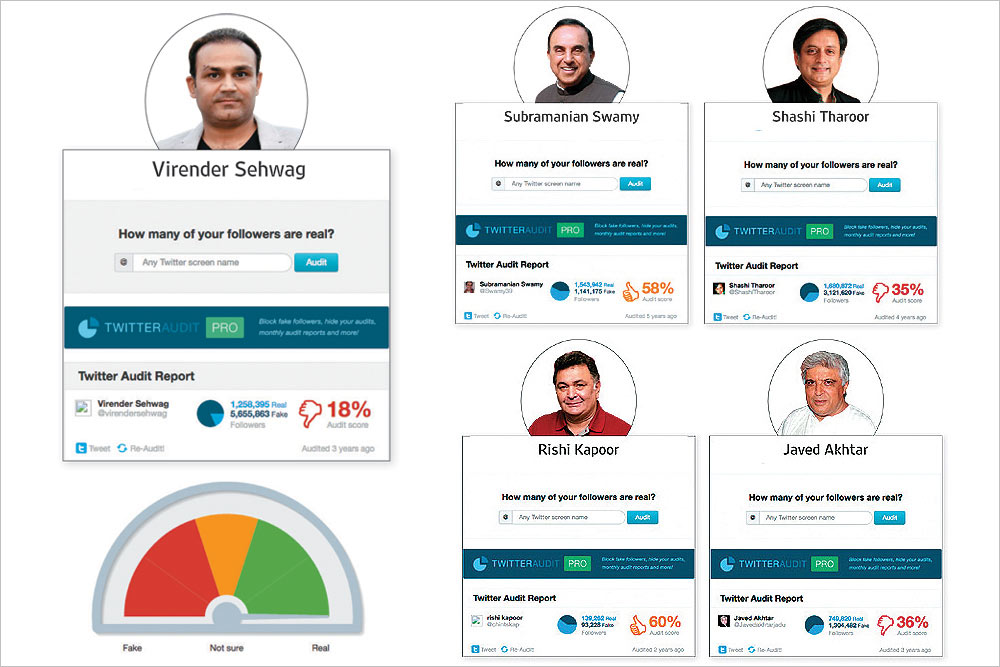 A Twitter Audit score of a celebrity. A red score tells a majority of followers are fake. Yellow is the grey area, and green means an organic profile.

At the bottom, it’s a numbers game—so generating followers and creating popularity through likes has become a full-fledged profession. “In less than three years, we have had an almost 100 per cent jump in clientele,” says Dinesh Kumar Saran, a social media marketeer, who has over 1,000 clients. “From curating your profile to ensuring traction through generating followers and likes, we do it all, and have a fixed rate for it,” he says.

How does it work? A network of desktops for hire, across the globe, filling out all the vitals of the client’s account—followers, likes, comments—giving it the sense of a big, spread-out ­empire. Your account looks in the pink of health. And the rates depend on the platform. “The going rates are Rs 12,000 for 25,000 followers on Twitter, Rs 10,000 for 15,000 followers on Facebook, and Rs 6,000 for 1,00,000 followers on YouTube,” says Saran. Since Twitter has wider reach, 25k counts for a smaller pool than 15k does on the more boutique ecology of FB. Bought individually, the rate-per-follower on Twitter is double than on Facebook, Rs 2 against Re 1, bec­ause experts feel traction on FB is falling. All this because social media stars almost invariably manage to monetise their stardom—Talwar rece­ntly got some money by slipping in a funny jingle for a brand.

But since real traction is what matters, do fake followers really help? Are sponsors fooled easily by the unreal numbers that even minor celebrities boast of? “As social media analysts, we can easily tell the difference,” says Sagar Thareja, a digital marketing guru. “An inorganic growth in followers and likes is sporadic, and one usually sees a drastic fall (in the growth rate, or likes etc) once the dura­tion of that deal is over. On such profiles, activities like comments and shares are negligible.” Analysts like Thalr­eja­, employed by big brands, are able to handpick celebrities who have seen an organic growth for campaigns and collaborations. “The ‘leads’ organic celebrities give (i.e. the number of real people who see their posts) are a lot higher, and the ratio of conversion from those leads therefore also proves higher,” he says.

Saran makes sure the client has a clear idea about the deal: only a sudden spike in numbers will happen, not consistent growth. “For our clients it’s all a popularity game, they want to be able to publicise their numbers,” says Saran. Vanity goes hand in hand with business.

There are sites like Twitter Audit that can parse celebrity numbers for fakes. All one has to do is paste a Twitter handle one wants to ‘audit’ and the site will analyse 5,000 followers to yield the percentage of ‘fakes’. It reads a fake account by the number and frequency of tweets and its own followers—though it can’t tell how many real followers may have signed up but lie dormant. Now, most Twitter accounts have some fakes, so Twitter Audit certifies any score above 60 per cent as ‘real’, 40-60 per cent as ‘not sure’ and anything below 40 as ‘fake’. Other sites, such as Fake Follower Check, can tell how many followers are active, inactive or fake, though within a sample size of only 500 followers. For more advanced results, a fee can be paid for knowing about specific categories.­

Outside of all this lather, there ind­eed are true-blue social media stars who have grown on their own steam and have fervent followers. Many were on it just for fun, until they realised there’s money to be made. Writer and model­ Kar­una Ezra Parikh, who has 47,000 followers on Instagram, started ­curating her profile to share her writing, until she began to gain followers and offers for sponsored posts and ­offline campaigns.

“I started out of necessity,” says Alicia Souza, an illustrator who has over 51,000 followers on Instagram. “When I moved back to India, I didn’t know anyb­ody and didn’t have a portfolio as an illustrator. My social media pages became my portfolio as I started putting my sketches there.” It’s worked so well for her that now, she is not able to meet the demand for her illustrations.

“The number of followers you have may not necessarily be a measure of how good your work is, but it helps to create a buzz about you,” says photographer Nayantara Parikh, who gets most of her work because of her Instagram images (like the shoots she recently did for Dior’s Poison perfume). Food blogger Shivesh Bhatia, a 20-year-old ­undergrad at Delhi’s Hindu College, posts pictures of his desserts and is now part of more than 10 paid collaborations, charging a minimum of Rs 15,000 for a post across Instagram, Facebook and Twitter (he slipped in two references to his new #VivoV5Plus phonecam in just a week). He’s already going places, thanks to his social media profile—he’s a kitchen consultant to restaurants and a recipe developer for brands like Britannia and Del Monte, all this without obtaining any formal degree.

The social media economy can take many shapes and forms. New brands often get orders purely through their online presence. With celebrities, it could be by way of requests for advertorial posts. “These are lucrative, but tricky. You don’t want to put out a compromising ad,” says Chandan Khanna, a photojournalist, with a following of 50,000 on Instagram. Khanna says he’s been offered Rs 15,000- 20,000 for an Instagram post, and bigger money by stalwarts like Apple, since Khanna uses only an iPhone to shoot.

Some brands were born online, so to speak, or born-again. When the famous Happily Unmarried decided to launch a new brand for men care called Ustraa, they did it on Facebook. “We wanted to target a very specific audience, and felt Facebook, with its ability to segment audiences, would be perfect,” says Rajat Tuli, co-founder of Happily Unmarried. Mogra Designs got such huge orders for its “ethnic textiles, but international cuts” that founder Sheena Roy quit her full-time job within a month.

“I’ve had many people message me asking for personal sketches. They transfer the money to my bank,” says cartoonist Divya Bhatia. Her biggest break was when Google asked her to recreate an upcoming event through her cartoons. Fashion blogger Masoom Minwalla, who started using the social media to drive traffic onto her blog, saw a similar spike in work. Minwalla has since collaborated with big brands including Bobby Brown, Swarovski, Clinique and Tarun Tahiliani. Even big brands want to use the reach of “social media influencers”. Procter and Gamble recently upped its digital focus, having “Twitter parties” with influ­encers and bloggers.

That certainly speaks of serious scaling up. The trusted, old forms of advertising suddenly seem as anachronistic as the old economy—scattering bits of post-truth all over the ether seems to be the way to go. Be warned, when you start following or liking someone, you may just be the number the celeb needs to crack a big deal. Nor are all the blinking lights on the digital autobahn for real.

The First Line Of Intestinal Defence