Myanmar’s clever route to integration, and India’s possible role in it 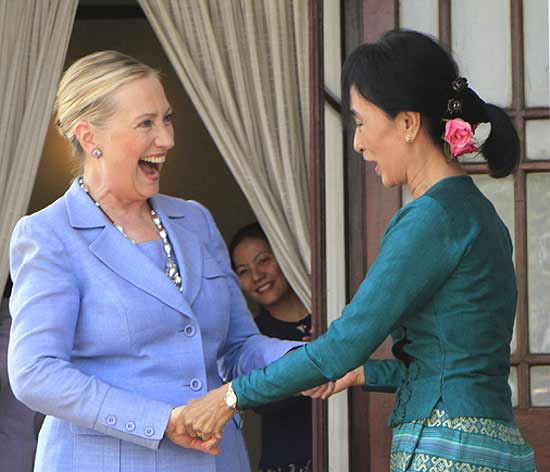 The image may become iconic, a visual representation of a decisive moment in the modern history of Myanmar—United States secretary of state Hillary Clinton warmly hugging Aung Sang Suu Kyi, the lady who has spent much of her political life demanding democratic freedoms and being incarcerated in answer. Since the much-celebrated embrace had the approval of the Myanmar government—though elected, it consists of several former generals—it has sparked off a furious debate: does 2011 mark the beginning of the end of Myanmar’s isolation? What does the West’s rapprochement with Naypyidaw mean for the region and the world?

No wonder, foreign policy wonks in Delhi too are trying to foretell the future from their interpretation of Hillary’s visit. They believe it expands Myanmar’s foreign policy options and allows India to work with the West to check China’s awesome clout in Myanmar. But there’s a flip side—Washington’s engagement with Naypyidaw will enable the US and its allies to seek investment opportunities in Myanmar. In such an eventuality, India is likely to lose the advantage of being among the few who do have an enviable economic presence there.

Hillary’s visit to Myanmar has to be seen in the context of America reinserting itself as a key player in Asia-Pacific, becoming a counterweight to a rising and assertive China, and rallying Asian countries under the banner of the Stars and Stripes. Former Indian foreign secretary Shyam Saran says, “US engagement with Myanmar will promote the diversification of that country’s foreign relations. This offers the best opportunity of preventing Chinese domination of its polity and economy.” Saran is candid enough to admit: “India’s own capabilities are not sufficient to sustain a strong and credible countervailing presence.”

Perhaps views such as Saran’s assume an inherent rivalry in Sino-Indian relations. But there are others who have serious doubts about the possibility of countering China’s clout in Myanmar. Aloke Sen, who till recently served as India’s ambassador to Myanmar, says, “It’s very difficult for the US or any other country to replace China’s influence in Myanmar brick-by-brick.” Sen points out that former Myanmarese generals, including president Thein Sein, are both “fearlessly nationalists” and “extremely pragmatic”. These generals had fought against China when Beijing was supporting the ethnic insurgents in the country. Yet, as soon as the US and its allies turned against Myanmar in 1988 following the brutal suppression of popular pro-democratic protests there, the generals had no qualms in embracing China, which was the only country willing to support them diplomatically, politically and economically. Result: an exponential rise in Chinese influence.

“It’s difficult for the US to replace China’s influence. The US often gets caught in the eloquence of its own statements.”
Aloke Sen, Former ambassador to Myanmar

This sense of pragmatism was evident in the positive response of Myanmarese leaders to India’s overtures, willing to overlook New Delhi’s aloofness in the years after 1988. The leaders were also wary of putting all eggs in the Chinese basket. Wouldn’t they display the same pragmatism towards the West? The only problem, says Sen, is America’s extensive wishlist on democracy. “The Americans often get caught in the eloquence of their own statements, making it so much more difficult for countries like Myanmar to match,” Sen explains.

Already, there are differences in perceptions about what compelled Myanmar to opt for its version of glasnost. The West believes the release of Suu Kyi, greater political freedom to people, and elections—Suu Kyi is expected to fight for one of the 50 seats still to be contested—are consequences of the sanctions the West imposed on the country and its ability to cut off investments from the imf and the World Bank. They, therefore, feel the more pressure applied on Myanmar, the greater the chances of it restoring a full-fledged democracy.

Others rubbish this school of thought, saying sanctions only compounded the hardship of the people and perpetuated the status quo in the country. For instance, Myanmarese historian Thant Myint-U, author of Where China meets India, told Outlook, “The positive changes taking place now are taking place in spite of the western sanctions, not because of them, and because Myanmar is that much connected to the world, through the internet, satellite TV, and the regular travel of tens of thousands of ordinary people to places like Thailand and Singapore, making it plain that the status quo was simply indefensible.” Thant says Myanmar has tried for over two decades to end its international isolation, and managed to improve its ties with many countries in the region. “In fact, the American policy of trying to isolate Myanmar has failed spectacularly and only reinforced the status quo,” he says. In other words, the failure of sanctions and Chinese assertion prompted the US to rethink its Myanmar policy.

“The positive changes are in spite of western sanctions. The US policy of isolating Myanmar failed spectacularly.”
Thant Myint-U, Author of Where China Meets India

The possibility of the West lifting the sanctions means many western countries will rush to invest in Myanmar. This possibility is unlikely to please India, which has several road projects and an oil exploration contract. With the Indian private sector reluctant to invest in Myanmar, New Delhi has had no choice but to depend on the public sector for executing these projects. Shoddy work and time overruns have been India’s unmistakable signature. About the private sector’s reluctance, Saran tells Outlook, “Currently, India’s corporate sector is inhibited from investing in Myanmar because US sanctions may impact their more important US-related operations.” At its recent meeting, FICCI discussed threadbare the issue of investing in Myanmar, and with the changing political climate there, exuded confidence about Indian firms entering various sectors.

Others feel India might have missed the bus already. To begin with, Indian public sector companies haven’t really been an advertisement for India’s engineering skills. Sen provides another reason: “With the opening up of Myanmar, more countries are likely to move in; it will then become a level-playing field for all. Indian businessmen and companies may then be left with just a symbolic advantage of being Myanmar’s neighbour.” Symbolism provides ballast to rhetoric, but lends little weight to hard business. India needs to act with professionalism and urgency.