An on and off player for more than 13 summers, punctuated by controversies and visits to the surgeon's table, Cairns is 'guilty' of not quite fulfilling the potential he has. 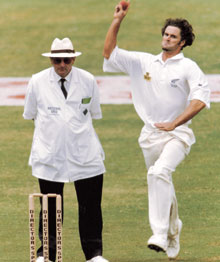 An on and off player for more than 13 summers, punctuated by controversies and visits to the surgeon’s table, Cairns is ‘guilty’ of not quite fulfilling the potential he has.

The best of Cairns came out during the 2000-01 season. One he will cherish most, unless of course he helps New Zealand win the World Cup this year. On the Kiwis tour to Zimbabwe, he scored his third Test century with 124 but in the process suffered an injury. Yet he held on to play a significant role in the icc knockout tournament in Kenya soon after.