The Bugs Just Got Bugsier 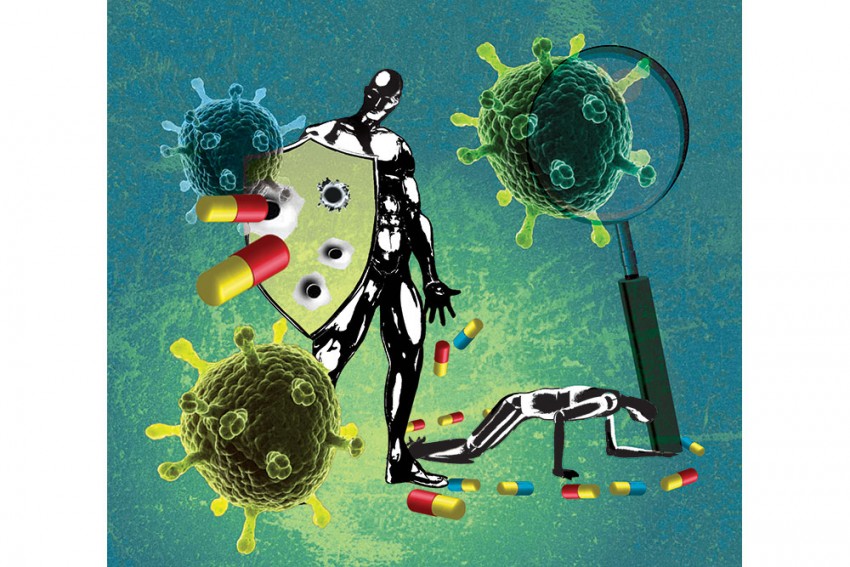 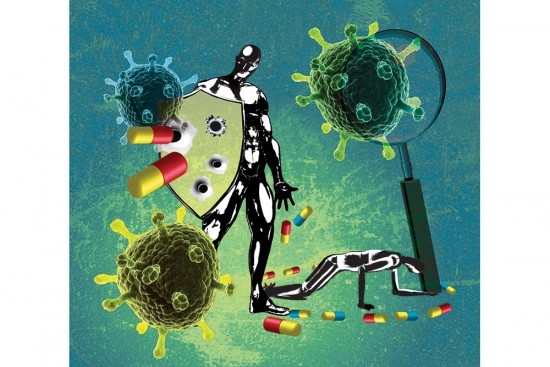 Fever, flu, bodyache, nausea? Popped a few pills? Nothing may happen. Antibiotics, the bedrock of modern medical practice, may be rendered ineffective so soon that even minor infections (from say, an abrasion) could leave you fighting for your life and surgeries that are taken for granted now, such as knee replacements or organ transplants, could prove fatal. Every medical procedure depending on antibiotics to fight attendant infections could bec­ome compromised owing to microbes developing resistance to antibiotics. It’s a global predicament and in India, where alm­ost any medication is buyable without prescription, we are approaching an alarming tipping-point.

The appearance and rapid spread of anti­biotic-resistant bacteria has seriously impaired the arsenal usually deployed against them. The culprit is the irrational use of antibiotics—as much thro­ugh faulty or mindless prescription and the use of combination drugs as through rampant prescription-less ingestion. As random mutations occur in bacteria, some strains develop resistance to antibiotics and survive while others are killed off. Result: the same infection is rendered untreatable. Does this portend the end of what were once called wonder drugs, beg­inning with penicillin that came into use in the 1940s? Well, there are indications that on account of this, in a few years, we may be faced with dire setbacks—medically, socially, economically.

If over-prescription is to blame, so also are the patients: many do not complete a course of antibiotics, stopping when the symptoms wane.

The steady rise in use of antibiotics is not itself the problem—or indicative of it. How­­ever, studies of prescription and sale patterns point to their use in inappropriate ways. And, of course, it’s common knowledge that, short of psychotropic drugs, anything can be bought from most medical stores. Patients’ habits, too, play a role: instead of completing a course of antibiotics, most people stop once the symptoms begin to wane and remnant bacteria develop resistance. According to a 2011 report of the Indian Journal of Medicine, drugs are being prescribed in incorrect doses, for incorrect duration and in wrong frequency of intake. Some prescriptions are redundant, some have the potential to interact adversely with other drugs. “Doctors resort to unnecessary prescription of antibiotics for various reasons—playing it safe to avoid accusations of negligence, to avoid a sense of guilt or because they are either insecure about patients’ satisfaction or lack in professional confidence,” says Dr Vinod Paul, professor and head of the dep­artment of paediatrics at All India Institute of Medical Sciences (AIIMS), Delhi. And Dr Camilla Rodrigues, a microbiology consultant at Hinduja Hospital, Mumbai, says, “One can’t treat the pathogen in isolation. We have to be circumspect in our prescription of antibiotics, not randomly extend them to viral infections.”

In a tropical, highly populated country like India, the burden of bacterial disease is among the highest in the world. Naturally, then, antibiotics play a critical role in limiting morbidity and mortality. Therein lies the beginning of the vicious cycle of overuse and growth of resistance. In fact, resistance is a normal phenomenon; only, it’s now happening at such an accelerated pace that pathogens are overwhelming all treatment attempts.

Why, then, are people brainwashed into antibiotic dependency? Dr Mira Shiva, of the All-India Drug Action Network, blames “over-medicalisation, irrationalisation and pharmaceuticalisation” of health problems and an “orchestrated amnesia” of existing alternatives. Prof Ramanan Laxminarayan, vice-president for research and policy at the Public Health Foundation of India, says, “They offer the promise of a quick cure at low cost. In reality, these are powerful drugs that can harm us if used inappropriately and should be avoided unless absolutely necessary.” (Also see interview.)

So serious is the problem worldwide that Prof Dame Sally Davies, chief medical officer for England, says, “It’s often said that without antimicrobials, we will see the end of modern medicine. This is truly a reality if we don’t act. Not only do we take them to treat infections, we also use them to underpin modern medicine, for example, to carry out routine operations such as Caesarian sections.” And Dominique Monnet of the European Centre for Disease Prevention and Control says, “Because resistance is inc­reasing and few new antibiotics have been discovered and marketed in recent years, the problem of antibiotic resistance is now a major public health threat.”

Development of new drugs isn’t enough. Counterfeit or low-quality drugs are a seri­ous concern; as Prof Davies explains, counterfeit drugs deliver sub-therapeutic doses, which means the infection is not treated and at the same time it gives the organism the opportunity to dev­elop resistance. Lack of testing to determine whether an illness is indeed caused by bacteria and not viruses (which do not respond to antibiotics) is another promoter of resistance, for antibiotics are then given “just in case”. Drug combinations are also a problem. Last December, a Reuters investigation revealed that an Abbott unit in India was selling a cefixime-azithromycin combination that’s not for sale in major markets such as the US, UK, Germany, France and Japan. Anand Kadkol, associate director of public affairs for Abbott India, refused to comment.

Almost all doctors point to over-the-counter sales as a culprit, besides pointing to members of the profession prescribing indiscriminately. Dr Atul Kulkarni, professor and head, anaesthesiology department, at the Tata Memorial Hospital, Mumbai, says, “Except for narcotics, most other drugs are available over-the-counter in India. There is nobody to check on their sale and usage. This leads to the rampant use of antibiotics, which eventually contributes to resistance.” And Dr Chand Wattal of the department of clinical microbiology and immunology, at the Sir Ganga Ram Hospital, Delhi, says, “Patients should be more empowered. They should be asking questions like are you prescribing antibiotics? If you are, do I really need them?”

The use of antimicrobials for livestock, in aquaculture and surprisingly, even in agriculture, is another misuse contributing in a major way resistance. The Indian Journal of Medical Research report also points out that there is no regulation in India of the use of antibiotics in poultry, dairy, cows and buffaloes raised for human consumption. The precise effect of agricultural antibiotic use on resistance levels in the general popul­ation is not known, but the evidence points to a link. Says Dr Jagdish Prasad, director-general of health services, “Antibiotics are being used in livestock also. If this epidemic spreads, the smallest of infections or diseases could lead to death.” A Lancet infectious diseases commission report of 2013 too outlines that antibiotic use in veterinary medicine and for growth promo­tion and disease prevention in agriculture, aquaculture and horticulture is a major contributing factor in the present crisis.

“Patients must ask docs ‘Are you giving me antibiotics?’ and ‘Do I really need them?’” says Dr Chand Wattal of Sir Ganga Ram Hospital.

The association of microbial drug resistance with India got cemented in NDM-1, or New Delhi metallo-beta-lactamase 1, an enzyme that certain types of mutated bacteria start producing to become resistant to all but a few antibiotics. Prof Ramanujan says even third-generation cephalosporins and carbapenem antibiotics are losing potency. “Ten years ago, resistance ot carbapenems was zero; now, it has shot up to 50-60 per cent,” he says and blames drug companies for pushing them. Dr Shiva, too, thinks that antibiotics are promoted by pharmaceutical companies seeking profits; they even urge chemists to push them. “They brainwash the public as well as many in the medical profession into believing that there’s a pill for every ill,” she says. Then there are hospital-acquired infections—amazingly persistent anyway—proving obdurate and immune to all forms of treatment.

But despite the imminent threat of the era of antibiotics coming to a close, there are some—predictably from the pharma sector—who think that it is an inflated problem. D.G. Shah, secretary-general of the Indian Pharmaceutical Alliance, says that in terms of per capita consumption, India will be among the lowest-use countries. “In terms of usage, there is growing realisation that antibiotics are not meant for self-medication. More and more public and private hospitals rely on standard treatment guidelines, payers question medical bills and dispensing is regulated.”

Most doctors, medical professionals, activists and professors do not agree. They feel more sensitisation efforts are required. There has been a dramatic increase in the rise of superbugs and an equal drop in the number of new antibiotics available. Antibiotic research and development has gone dry and it’s a huge investment for any pharmaceutical industry to dive in. Quite naturally, the Indian medical community is worried. Dr Soumya Swaminathan, dir­ector-general of the Indian Council of Medical Research, believes that the challenge is to use existing drugs judiciously and put in place surveillance systems to find out the resistance and susceptibility patterns so that the data can guide treatment. “There are not many NGOs working in this area. Most of the sensitisation happens through conferences. There is a need to create awareness both among prescribers and communities,” she says. Prudent use of antibiotics is also the cornerstone of preventing the emergence and spread of resistance. Dr Marc Sprenger, director, antimicrobial resistance secretariat, WHO, believes that policymakers have a key role to play in tackling antibiotic resistance. “They can improve the surveillance of antibio­tic-resistant infections, strengthen policies and implement infection prevention and control measures,” he says.

India, with its high burden of infections, bears the brunt of antibiotic resistance. Many deaths occur because patients don’t have access to life-saving drugs. Ironically, antibiotics are used in situations which are unwarranted, such as for common colds or diarrhoea. Some efforts have been made by the government, academicians and professionals to curtail its misuse, but that’s just the tip of the iceberg. The problem requires a much bigger national focus in order to save antibiotics, to save lives.

By Priyadarshini Sen with Aheli Basu

“If We’re Re-Elected, Uttar Pradesh Will Get A New Identity As Uttam Pradesh”