The beginning of the fourth largest religion in the world. 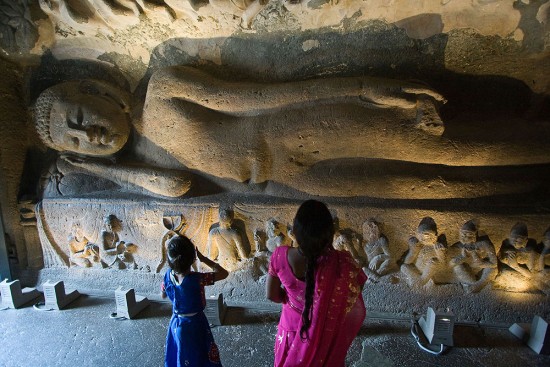 The sun has slipped behind the tarpaulin roofs of a Mumbai slum. Day labourers are streaming home from ten-hour shifts working on construction sites or tending the gardens of nearby private schools. In this particular web of slum lanes, many workers are Dalit, the unt­ouchables of old—a status so low they were not even part of the caste order. Most months, their financial situation boils down to what people around here call ‘earn and eat’. But for two years, some of these families set aside what little they could for bricks and mortar, and now they have a deep-blue room, five metres a side, that stands distinct from all the other hand-built homes in the slum.

A temple devoted to the Buddha: many slums in urban India have one. This particular place of worship is tucked behind a scrap shop. In the West, the Buddha is often seen as an extinguisher of his own personality. Indeed, after atta­ining his enlightenment, it is said that he referred to himself as tathagata, ‘gone’. But he is far more surprising than that conventional image—or the one of a placid sage sitting in the lotus position, half smiling—lets on. Although many aspects of the Buddha’s life remain elusive, he is perhaps the first individual personality that we can recognise in the subcontinent’s history. In modern India, his legacy has helped hundreds of millions of poorer-caste citizens to become newly present—allowing them to emerge from the Hindu caste system’s iron cage. Fifteen-year-old Vijay watched his father lay bricks for the little blue temple. “Buddha had no caste, so I have no caste,” he says. “It’s better this way.” His older brother Siddhartha chimes in: “Buddha was for equality.”