The British Seeds of Secession

The Sikh response to Indian nationalism was complex—­loyal soldiers of the colonial army, they didn’t fall for the ‘separate electorate’ idea 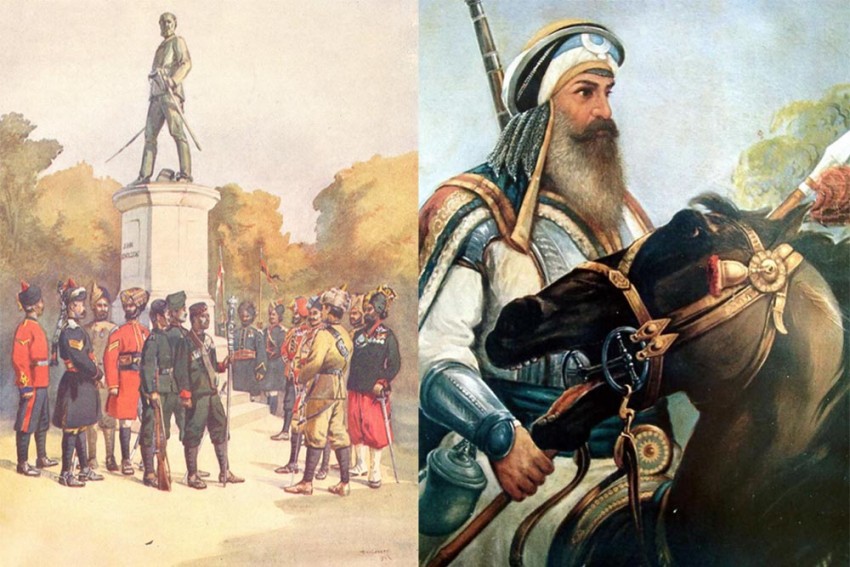 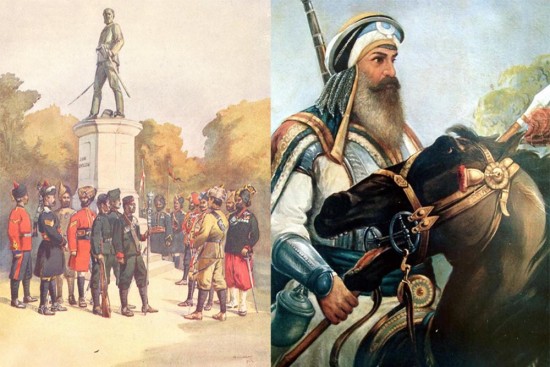 As the mutiny of 1857 dissipated into massacres of Indians by the British, the British began to sing paeans to the Sikhs as loyal soldiers who could be depended upon to do the bidding of their imperial masters. Memoir after memoir, written by the victorious officers of the East India Company, recalled how the Sikhs entered Delhi or Lucknow and massacred the defeated sepoys. Their “love for the excitement of war” came in for particular praise. This was much in line with what army surgeon McGregor had noted in 1846, as the then popular view among the British, that the Sikhs “loved war and strife bec­ause of the teachings of their gurus, particularly Guru Gobind Singh”. Over the next 50 years, the idea of Sikhs as a martial race would become a favourite principle of the British Indian army. By 1912, Sikh soldiers constituted some 20 per cent of the British Indian Army. Its most important ideologue, Lt. General George MacMunn, could say with great confidence in praise of the Sikhs that although “slow-witted, they were doggedly courageous and loyal”.

In the 1860s, it was decided to recruit Sikhs in the British Indian army in preference to others. In an economy shorn of any gainful employment, the army provided one of the best job opportunities—and with an assured pension too. Historian Mridula Mukherjee has calculated that at one point military pensions made up almost half of the money being lent out in rural Punjab. The retired soldier was not just a peasant, but also a moneylender—and hence a big man in his village. No wonder every Hindu peasant family in the Sindh Sagar Doab region of Punjab, the land between the rivers Sindh and Jhelum that was the largest supplier of cannon fodder to the colonial army, began to raise at least one son (usually the eldest) as a Sikh.

In 1907, however, this carefully crafted narrative of the “martial, dim-witted but courageous and loyal” Sikh took a severe beating. As peasants in 27 of the 29 districts of Punjab rose up in protest against unfair taxation, the government noticed with particular concern the participation of Sikhs. ‘Pagdi sambhal Jatta, lut gaya maal oye’ became the song of the rebellion that quickly spread across Punjab. “Spreading sedition,” the authorities noted as they prepared to deport Sardar Ajit Singh, the agitation’s leader, to Mandalay. Two decades later, Ajit Singh’s nephew Sardar Bhagat Singh would inscribe his name in India’s history for even greater deeds of opposition to the colonial government. In June 1907, however, the Secretary of State for India John Morley, a Liberal, pro-Indian, former newspaper editor, was mainly concerned that the agitators were telling Sikh soldiers “their willingness to shoot down (Indians)” was what enabled the British to rule India. It would have been a disaster for the British if the Sikh soldiers stopped shooting Indians.

Earlier, in 1906, Morley had initiated the process of electing Indians to the various legislatures of India. He was at great pains to exp­lain that Indians were made up of different religions, races and people, and that the principle of ‘one man, one vote’ could not be followed here. Each race, in his view, needed separate representation. However, it was only the English-educated Muslims, the first generation of the Mohammedan Anglo-Oriental College (which would become Aligarh Muslim University in 1920), who put forth a claim for separate representation. The Sikhs did not. The Morley-Minto refo­rms—the popular name given to the Indian Councils Act, 1909—thus provided for separate Muslim electorates. Sardar Ajit Singh (left) was deported to Mandalay by the British; his nephew Bhagat Singh

It was almost as if the British government was grooming the Muslims of India to form a separate nation. A similar exe­rcise was already in the offing in Europe with the British promising the Jews a religion-based nation of their own, to be called Israel. The British were sowing the wind. Indians, Pakistanis and Palestinians have since been reaping the whirlwind. Historian Mushirul Hasan says the Muslim separatist claim was an entirely artificial construct, made contrary to the observed reality. He points at the colonial effort to deny an identity to India by ignoring the commonalities between Muslims and Hindus of the region, and also the dissimilarities among the Muslims of India.

Meanwhile, the imperial capital was shifted to Delhi. Edwin Lutyens and Herbert Baker were commissioned to plan the new town and design its buildings. As the British went to acq­uire land for the construction of New Delhi, there faced a lot of pressure from local farmers, who demanded a better deal. The Sikh community at Rakabganj and Raisina reminded the aut­horities of the special relationship with the British ever since they helped the government put down the rebellion of 1857. They managed to obtain for themselves 750 acres of land in the Lower Bari Doab area and also a promise that the guru­dwara at Rakabganj would not be demolished.

The gurudwara at Rakabganj was one of the seven constructed in and around Delhi, in the early 1780s, by Sardar Baghel Singh after his troops entered Red Fort and surrounded Mughal emperor Shah Alam. The emperor then granted Baghel Singh many privileges, among them the privilege to construct as many gurudwaras as he liked, wherever he wanted. The one at Rakabganj commemorated the cremation of Guru Tegh Bahadur, who had been beheaded at Aurangzeb’s orders for refusing to convert to Islam.

Trouble began in the 1910s with the layout that Lutyens created for the Viceregal Palace (currently Rashtrapati Bhavan) and Baker’s design for the Central Secretariat. To ensure symmetry for the roads to these great symbols of imperial power, the engineers demolished a boundary wall of the Rakabganj gurudwara. There was an immediate outcry from the residents of Rakabganj and other neighbouring settlements. At Amritsar, the Chief Khalsa Diwan convened a meeting of the various Singh Sabhas and petitions were sent to the government underlining the great sacrifices the Sikhs had made in service of the empire. Police reports from Punjab indicated that rumours were afloat about the British planning to demolish the Rakabganj gurudwara for constructing the Viceregal Palace. On one occasion, an assembly at Rakabganj, of some 700, promised to lay down their lives for protecting the guru­dwara. Finally, things were brought to a peaceful end with Ripudaman Singh, the Sikh Maharaja of Nabha, convincing the town-planners to give up their dream of symmetrical roads. Ripudaman Singh then went on to reconstruct the dem­olished walls at his own expense, earning the gratitude of the government as well as the congregation of the gurudwara.

Having burnt their hands at Rakabganj, the town planners did not insist on meddling with the layout of another guru­dwara that stood in the way of their symmetrical plan. The plan for the shopping district, Connaught Place, was changed to accommodate the Bangla Sahib gurudwara, which was housed in the bungalow of Rajputana chieftain Jai Singh, while the rest of the compound of Jaisinghpura, the settlement that had come up around this bun­galow, was demolished.

On June 25, 1914, the singed planners of Delhi issued a public statement that the plan for the new city would take due consideration of all the sacred places of Hindus, Muslims and Sikhs. They reiterated that the plans for the new buildings and roads were drawn up in such a manner as to leave the holy places untouched. If this called for making a street serpentine, that would be done. An effort would also be made to not cramp a holy place were it to fall close to a public road or building, giving it ample surrounding ground for a public garden. The idea, it was said, was to form a picturesque link between past and present. Lord Roberts, one of the major proponents of the martial race theory, did recognise that a heavy dependence of the imperial army on Sikhs may prove counter-productive in the future. The Sikhs, it was feared, may turn out to be not “dim-witted” as the colonials thought. Towards the end of his life as an imperial militarist, Roberts did try to identify other ‘martial’ races that may be used by the imperial army. Tribals from the Northeast was an option that was discussed. At one point, he even recommended the inclusion of Zulus from Africa to dilute the Sikh presence. Nothing much came of it. Instead, when the time came for reviewing the role of Indians in government in 1935, the British recognised the Sikhs as a distinct race that needed separate representation.

The Akali Dal, by this time the most visible political grouping of Sikhs in Punjab, was voc­iferous in its rejection of this communal award. It even managed to convince Sikhs from across political groupings to condemn the award. They declared it would only acc­entuate communal bitterness, sowing seeds of discord and strife. However, the Congress, with Nehru wary of upsetting Muslims, ref­used to issue any strong condemnation of this new round of separatism that had been foisted by the British on India.

A dejected Akali leadership, now led by Master Tara Singh, stood by helplessly, left with no option but to participate in elections on the basis of the communal award. In these elections, where the electoral college was made up of the propertied and salaried, the landowning voters from the villages of Punjab—mostly Sikh—preferred the Akalis, while the townspeople—mostly Hindu merchants—gravitated towards the Congress. The greatest shock to the Congress happened when Sardar Partap Singh Kairon, a young Akali leader who had recently ret­urned from the US after doing two MAs, roundly defeated the grand old Congress leader of Komagatamaru fame, Sardar Gurdit Singh. The defeat was even more humiliating because Pandit Nehru had twice visited the constituency to campaign.

Tara Singh now defined Sikhs as distinct from the Congress, which, he insisted, was a ‘Hindu’ organisation. When the Congress decided to boycott the war effort and demanded that the British ‘Quit India’, Tara Singh rejected the call. The Akalis, he would say, would wholeheartedly participate in the war. After all, Tara Singh explained, the war provided a grand opportunity of employment and social advancement to the Sikhs, martial as they were.

A few years later, when it became clear that independence was just round the corner, Tara Singh did make a claim for an ind­ependent Sikh state, much like Pakistan for Muslims. The small size of the Sikh population—just 15 per cent of the population of Punjab in the 1940s, while Muslims were close to 53 per cent—and the fear that Pakistan might try to overwhelm an independent Sikh country made Tara Singh give up that demand. He pitched his future with India. In the years to come, even while he was fighting against the Congress governments of Punjab, he would be at great pains to emphasise his commitment to India. But by now an idea had taken root that if religion could be the basis for nation formation, then there could be a Sikh state for a Sikh people.

(The writer is professor in department of history, Panjab University, Chandigarh.)