What happened to all the sandalwood Veerappan smuggled in his two-decade reign? Who runs the business now? A journey down the illegal trade route. 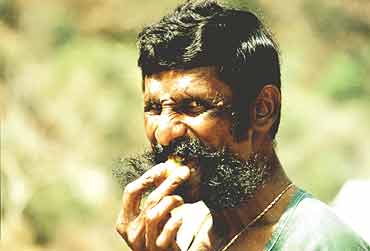 outlookindia.com
-0001-11-30T00:00:00+0553
All through his life as a poacher and sandalwood smuggler, the police in Karnataka and Tamil Nadu would issue statements on the thousands of tonnes of sandalwood Veerappan felled and smuggled out of the Sathyamangalam forests. No one, despite the crores spent to hunt the bandit, seemed to have a clue as to where Veerappan's sandalwood went. But now that he is dead, the details of the trail that the bandit's loot took, the manner in which it was transported and where it finally ended up is finally surfacing. The picture that emerges is of a lucrative sandalwood oil business running into thousands of crores which flourished thanks to political patronage and police connivance in Karnataka, Tamil Nadu, Kerala and, to some extent, Andhra Pradesh.

Investigations by Outlook, which involved tapping the forest department and going on the trail that Veerappan took, reveal that most of Veerappan's loot crossed the Tamil Nadu and Karnataka borders and reached Kerala's Palakkad district. Here it was steam-distilled into sandal oil and sold in the international market to perfumeries and cosmetic manufacturers. The oil retails in the international market at US $ 30 for 10 ml. For the uninitiated, sandalwood is only a sweet-smelling wood but for those in the business sandal oil is liquid gold. 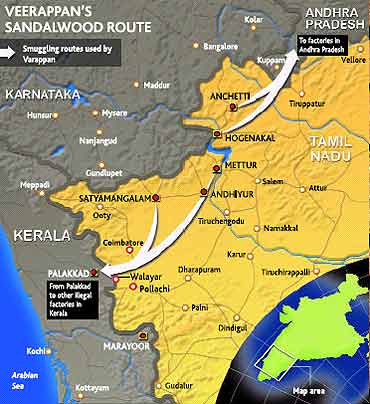 The fact that the loot went to Kerala has been confirmed by forest officials. Says Tamil Nadu forest ranger Bhadraswamy who headed the first commando squad formed to nab Veerappan, "Most of Veerappan's sandalwood was going to factories in Kerala, particularly Palakkad district." K. Chella Durai, another range officer feted for a huge seizure of sandalwood a few years ago, confirms the route of the illicit sandalwood. Both officers wanted to search some of these factories, but the inter-state legal boundaries kept them away. It is also an open secret that the sandal oil factories enjoyed the patronage of successive state governments in Kerala.

The factories are all located in Kerala beacuse of lax forest laws in the state. While laws in TN and Karnataka did not allow any private person to produce sandalwood oil, and prosecuted anyone carrying more than five kg of the wood, laws are still ambiguous in Kerala.

For what is a multi-crore operation aimed at the international market, the factories which extract oil from the wood are nondescript outfits resembling timber mills. The equipment used is very basic and the operations can be easily shifted out. Over the years, the units operated with impunity with the police and forest department officials looking the other way.

Ironically, those who have been plundering the forests over the years have in a way virtually killed the golden goose. Today, the sandal oil factories that dot the Kerala-Tamil Nadu border in Palakkad district are desperate. The supply from Veerappan's territory—the Sathyamangalam forests—have virtually dried up and in the last census in October 2004 even Kerala had only 58,251 sandalwood trees left. Felling the tree is banned as environmentalists fear it will soon become extinct.

The sandalwood scam, which all along had been kept under wraps by the authorities in Kerala, came to light when a conservator of forests closed down four factories two months ago. His action was prompted by a direct link between the theft of sandalwood from Kerala's Marayoor forests near Munnar and the factories in question. The conservator was transferred immediately after he acted against the erring factories.

Having made easy money all these years, the sandalwood trade has become blatant. This alone explains why on September 2, sandalwood smugglers felled a tree from the campus of the Southern Forest Rangers College inside Coimbatore city. The theft, literally under the nose of the Forest Flying Squad which has an office within the campus, was a bit too much for the officials. Tamil Nadu forest officials were quick to raid three factories in Kerala—Walayar Rural Industries, Western Oil Industries and Elappuli Essential Oils, all in Kerala's Palakkad district. Of course, the forest team returned empty-handed. But on September 11 when the same gang returned to the Forest College to cut another tree, it was apprehended and in their statement the accused identified these very factories in Palakkad. And from Veerappan's days these factories were under the scanner, says Bhadraswamy.

Veerappan's Kerala connections are as old as his career. As far back as 1987, Karnataka forest conservator P. Srinivas, who was later brutally murdered by the brigand, brought Veerappan to Thrissur in Kerala. A Kerala forest official who accompanied Srinivas says, "Veerappan was brought here to identify the person who bought elephant tusks. Veerappan led us to a handicrafts shop in Thrissur's High Road. The shop was identified, but the person who bought the tusks was not there and hence Srinivas returned with Veerappan." No follow-up was done and the shop was not investigated.

The incident is illustrative of how callous the Karnataka, Tamil Nadu and Kerala governments were in tracing the final beneficiaries of Veerappan's elephant tusk poaching and sandalwood smuggling. Kerala's former chief of forest department, N.M. Pillai, still remembers how Veerappan was once caught in the 1980s in Palakkad while he was searching for a contact to sell his sandalwood and let off by the Kerala officials. "Nobody was serious, neither the police nor the forest officials," says Pillai. 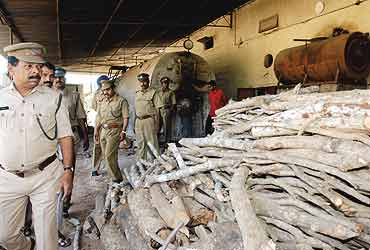 Today, the smugglers are dependent on the Marayoor forests near Munnar in Kerala for their wood. V. Prabhakaran, wildlife warden of Pollachi in Tamil Nadu, says that all the wood that he has seized recently has come from Marayoor en route to Palakkad. "Though both Marayoor and Palakkad are in Kerala, the easiest route is through Pollachi in Tamil Nadu. We caught around 400 kg of sandalwood in September. Now that the factories have closed in Kerala, the smuggling should stop," says Prabhakaran who had caught 100 tonnes of sandalwood in the Salem area in the mid-1990s, of which 90 per cent was going to Kerala. Even the modus operandi remains the same since the Veerappan days. Poor tribals would be paid Rs 150-200 a kg of the cut wood which would then be brought down through forest tracks. Then smugglers would take them to the factories where they would be paid around Rs 1,200 a kg.

The felling in Marayoor became so rampant the forest department was forced to number the existing trees in a census conducted in 2001 and they found a mere 65,437 trees. Despite the surveillance, around 7,200 trees were cut and smuggled in just three years, according to 2004 October census. Each tree yields around 30 kg of "heartwood". So, around 220 tonnes of heartwood worth over Rs 50 crore (official price is over Rs 2,000 per kg for heartwood) was stolen from reserved forests.

But whenever Kerala officials got serious about checking the sandalwood smuggling, they have landed themselves in trouble. In 1997, the Palakkad divisional forest officer Prakriti Srivastava sought the closure of four factories distilling smuggled sandalwood without proper clearances. "I request that the licence granted by the local officers of your department to the above four sandalwood factories may please be reviewed and urgent steps taken to cancel the same in order to prevent smuggling of sandalwood in this area from neighbouring states and also safeguard public interest," Srivastava wrote on October 20, 1997. No action was taken, though it was clear that she was referring to smuggling from Tamil Nadu.

Later, as the officer in charge of the Marayoor sandalwood forests, Srivastava seized a huge quantity of wood from a local resident. But astonishingly, the government counsel chose to plead for the accused when he met Srivastava in private.Srivastava put the whole episode on record on June 24, 2003, in a letter to the state's forest secretary: "As I lost hope that the government's side in the case would not be represented due to the vested interest of the government pleader, I discussed the issue with your good self over telephone. As per your advice I met the advocate general." She was soon transferred out. 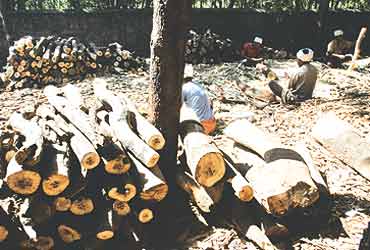 The only action taken against the factories all these years were periodical raids that yielded a small quantity of unaccounted sandalwood. It suited the factories and the officials; the police were found to be active and the factories could continue operations with a small loss of raw material. But things took a different turn when Amarnatha Shetty, a senior Indian forest service officer, sealed Elappully Essential Oils, Walayar Rural Industries, Premier Perfumeries and Venus Industries on October 28, 2004. The very next day Shetty was transferred.

Shetty exposed how sandalwood factories functioned all through the 1990s without any check, in his petition before the central administrative tribunal against the transfer: "In the past, even though raids were conducted in the factories and illegalities were detected, due to outside interference and due to the influence which the sandalwood lobby could exert at the highest level of government machinery, the factories were allowed to continue their operation by merely registering the crime. This time also there was great pressure on the applicant to allow the factories to continue their operation. It is to be noted that it is for the first time the machineries were seized and proceedings initiated under section 61-A of the Kerala Forest Act, 1961."

But he had to suffer at the hands of highly influential persons who according to Shetty "exerted influence at the highest level of the government machinery" to get him transferred. Privately, forest officials name a couple of ministers in the Congress-led United Democratic Front (UDF) government as the beneficiaries of the sandalwood smuggling operations. In Kerala's bipolar politics, these UDF leaders are influential whichever dispensation comes to power. Shetty had actually recorded in an earlier letter to the forest department chief and forest secretary on October 27, 2003, that there was pressure from the forest minister to suspend action against the sandalwood factories: "On October 24, 2003, I was called by chief conservator of forests (northern region) informing that the Hon. forest minister had called him over phone and instructed him not to take any action against the factory authorities."

The clout of the smugglers and the factory owners is well established by the fact that 19 out of 24 sandalwood oil factories in Kerala could function till 2004 with just a no-objection certificate from the factories & boilers department. And despite the hue and cry raised after the recent closure of the factories, the forest department has not been able to nab the real sharks. So it is only natural that the real patrons of the factories might have devised alternate ways to tackle the crisis. The locals say they have shifted their operations to Pondicherry.

But the million dollar question is where will the wood come from? The East Indian sandalwood grows in Kerala, Tamil Nadu and Karnataka. The only other place it is found is in Indonesia. Killing Veerappan has not helped stop the sandalwood smuggling, as newer avatars of the brigand have taken over the operations. And as long as the nexus between the politicians of TN and Kerala and the sandalwood mafia is intact, the sandalwood tree will be in peril of extinction.