The Bread And Butter Shots

The BCCI's put up an offer they can't refuse. But will the ranks and ICPA be a casualty? 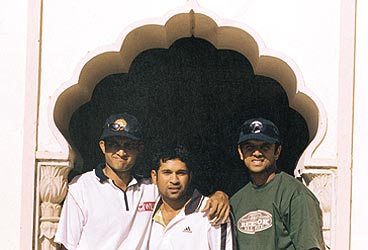 outlookindia.com
-0001-11-30T00:00:00+0553
The winds of change are sweeping Indian cricket. The Board of Control for Cricket in India (BCCI) is offering a bouquet of financial sops to cricketers. The meek haven't exactly inherited the earth but we're talking Magna Carta, no less. The board has made three specific moves. Under the first plan, 20 top cricketers will be put in three grades with an annual retainership of Rs 60, 30 and 15 lakh. The second scheme offers 26 per cent of the board's revenue split between international and domestic players. Plan three is that reserve players will earn only 50 per cent of the fees received by the playing eleven.

Two of the board's representatives met four senior cricketers—Sachin Tendulkar, Saurav Ganguly, Rahul Dravid and Anil Kumble—in Bangalore last week. Talks were more than cordial. As media manager Amrit Mathur put it, "Both the board and the cricketers have learnt from the recent past and are in a spirit of compromise." Just that this could mean opening a can of worms. The board has assumed senior cricketers have a mandate to speak on everyone else's behalf. The seniors too have assumed the mantle effortlessly. But the gulf in retainership could split the ranks. Said a middle-rung international cricketer: "The board shouldn't go by seniority. An annual contract is only on the basis of a cricketer's immediate performance. In the last one year, it was the youngsters who featured most in India's wins." True, good as the Tendulkars and Dravids are, it was youngsters like Mohammad Kaif, Yuvraj Singh, Harbhajan Singh, Zaheer Khan, Virender Sehwag and Ashish Nehra who were hitting the headlines.

The gulf indeed is glaring. Which makes the case for talk that the negotiators should have checked out other such arrangements in world cricket. New Zealand Cricket (NZC), for example, offers a staggered payment to its 20 top cricketers where one at the rung above gets $5,000 more than the one below. This ensures that the difference in retainership is never too large. Besides, it also ensures team spirit. Unlike the one offered by BCCI where grade-C cricketers would get half of what grade-B avail and they in turn receive half of what grade-A players would take home.

Further, the seniors appear to have dumped the once much-hyped Indian Cricket Players' Association (ICPA), formed last year by them with much fanfare. ICPA was formed with the express resolve to improve the international and domestic cricketers' lot in a trade union-like manner. Now tempted by lucre, they seemed to have turned their back on it. Arun Lal, ICPA secretary, though, refutes this. Says Lal: "After all, these cricketers are ICPA members." But being a member is not quite being the representative of a body.

The board, understandably, is quite pleased with itself. Never happy at the prospect of a cricketers' union, it feels it can now deal with players directly. Things could get complicated though if the latter tries to bring in ICPA after the contract is on the table. Says senior sports journalist Gautam Bhattacharya: "Now if the players try to bring in ICPA (at some stage of the negotiations), the board will turn around and ask who this third party is...which wasn't mentioned at all in the first meeting in Bangalore." A valid point and one which doesn't show the seniors in good light.

When ICPA was formed, it was a defining moment in Indian cricket. Even though it came about because players were in a financial bind—because of the row between the icc and BCCI over ambush marketing during the World Cup—it implied that players were willing to throw off the board's yoke. Ganguly and his men were defiant and official bodies beat a hasty retreat. Grand plans were announced for the welfare of first-class cricketers, including getting them insured.Cricketers, it seemed, would at last find a voice.

Lal gamely defends ICPA. "It's not stillborn. People ask me what ICPA has done since it was formed. I tell them if it was not for ICPA, first-class cricketers would not be getting the proposed hike the board is now offering." Match fees of Rs 30,000 as against Rs 10,000 now—a massive jump of 150 per cent.

The cricketers have also taken a tough stand on the board's second move, to share 26 per cent of the latter's revenues with them. The board wants to split it in two parts—half of it (13 per cent) going to international players and the rest spread between domestic (10 per cent) and junior (3 per cent) cricketers. Players want a clearer view of this demarcated percentage.

"The board's 26 per cent plan is a little difficult to comprehend. Does it include the investment the board makes on revenue? Does it include the interest it generates?" asks Lal. He feels the board should appoint an independent body to evaluate their income and beget trust. "The board claims to follow the Australian model. But the Australian board also shares on interest and investment with cricketers," says Lal. In this case, interest alone on the board's projected revenue of Rs 100 crore could amount to Rs 9 crore. Also, what happens if the board were to earn less revenue next year? So the cricketers are insisting the board guarantee an annual minimum payment.

The matter of more money to the first 11 players is more straightforward. Everyone feels those on the bench should get less than the eleven fighting in the middle for the team and country's honour. It's a matter where the board should face few hurdles. No one will argue that the Rakesh Patels should get the same money as the Tendulkars and Gangulys.

But there are deeper currents at play here. Jagmohan Dalmiya's BCCI, realising that player clout rests with only the seniors, has made a hard-to-resist offer to them. The seniors aren't all in the flush of youth—indeed the careers of Kumble and Javagal Srinath are drawing to a close—and a strong realism pervades their action. If the seniors fall in line, the banner of independence/rebellion is unlikely to survive—and so too ICPA. The board, once again, would rule the waves.

The BCCI is also likely to turn the screws on players in terms of their financial independence. Players could be asked to have an arrangement with their sponsors which doesn't impinge on the ICC's contractual obligation to its sponsors. Those with long-standing deals—like Ganguly has with Hero Honda or Pepsi—may be allowed leeway. But a Sehwag, who at best has an annual contract with Coca-Cola, may be asked to be careful in negotiating the next deal.

The board's money is an important tool to browbeat players into submission. The offered contract would spell out to players that they need to look after fitness, performance and general conduct—in such manner that they are up for consideration next year also.

The ICC also wants the Indian board to have some control over cricketers, lest a public spat break out as it did last season. The international body is legally bound to its sponsors on the ambush marketing clause and the cricket juggernaut could grind to a halt if sponsors were to stick to the letter of the contract. The moment of truth could arrive as early as September '04 when the entire cricket fraternity gathers in England for the biennial Champions Trophy. The board appeared no better than a sawed-off log tossed around in the high waters of players' defiance when the ambush marketing row broke last year. It couldn't cow down players on the ticklish issue of money.

The deal, as it stands now, is likely to come into being from this season onwards. Mathur says the board would have at least one more meeting with the players to hammer the plan into shape.It could well be in force by the time Stephen Fleming brings his Kiwis ashore for a high-powered two-Test and triangular series later this month.