Travails rule the life of a shepherd who is in the bondage of a landlord. Celebrated Tamil writer Perumal Murugan revisits his thematic home of caste, class and oppression in this new edition. 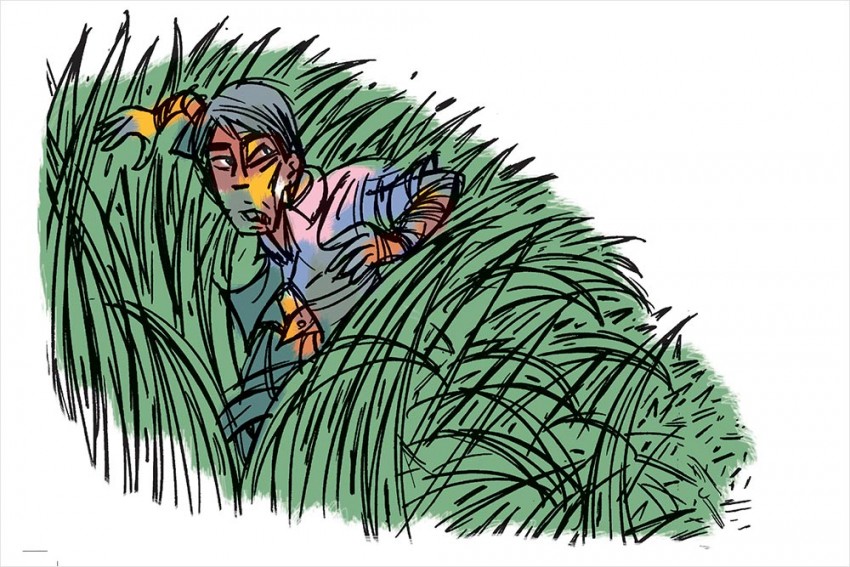 Illustration by Sajith Kumar
Perumal Murugan April 06, 2017 00:00 IST The Boy’s Cry That Sounds Like A Bleat 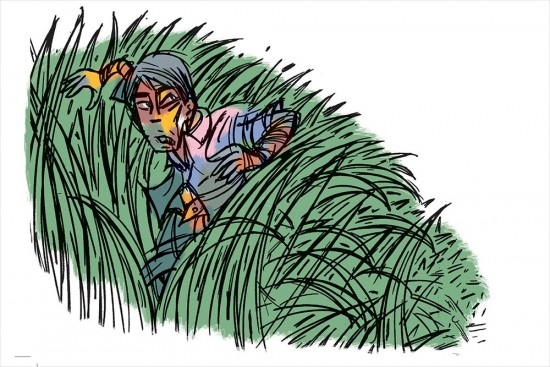 Shorty’s face falls. The last two days had been wonderful and now this. An ineffable sadness steals into his heart. He wants to say something, but finds himself tongue-tied. They must have beaten him up, and badly too. Tallfellow shouldn’t have run away. He could have stayed and confessed, and it wouldn’t have been so bad. They might have even forgiven him. On the other hand…. Who knows? They might have still beaten him to death.

Stonedeaf’s sister Matchbox comes by with a herd of sheep. There is no child on her hip though. She is small and obviously cannot carry that black butterball of a child all day. She looks distracted. Belly yells.

‘None of my business…. There’s a crowd in his Master’s house. I don’t know anything.’

Matchbox talks as if she is a hundred years old, with her head cocked to one side, in the manner of her Mistress.

Shorty wonders if he should go and find out what happened to Tallfellow. Not that he is overly worried. Tallfellow is smart, and can easily look after himself.

The sheep graze peacefully on both sides of the mudbank that leads to the lake. Along the water runs a line of tall dung weeds. The shoreline snakes on, calmly, effortlessly. The sheep will come down and graze along the shore soon. All is well here. He need not worry even if he has to go away for two days. Besides, Belly and Matchbox are there, and he can ask them to keep an eye on his sheep. 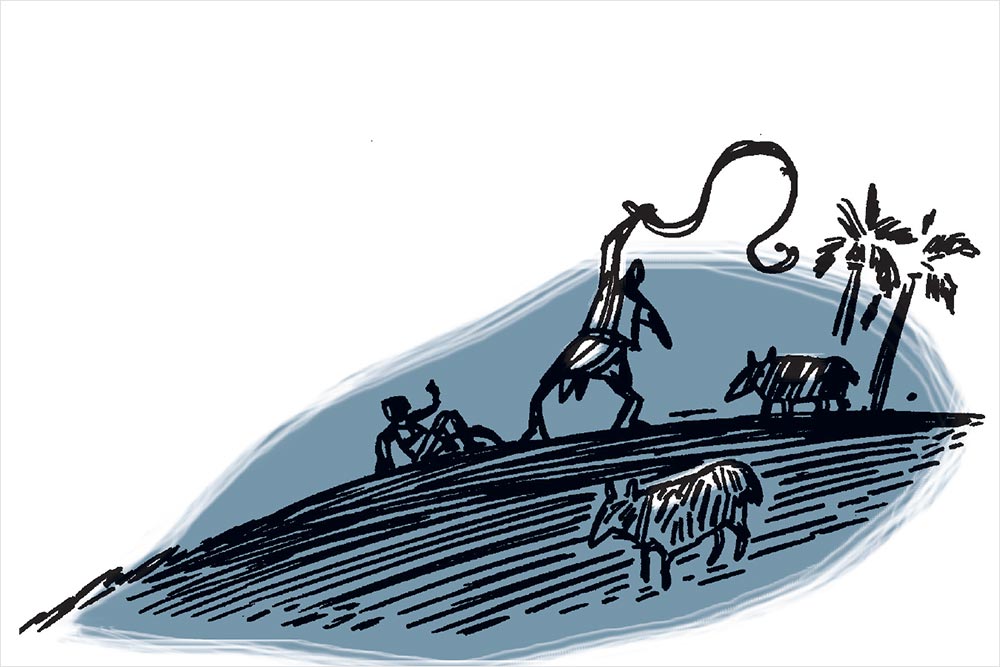 ‘Shall I go see what happened to Tallfellow?’

‘What’ll you go and see?’ Belly looks at him sharply. Shorty does not know. But he thinks he has to be with Tallfellow. Be by his side; assure him that he has friends. He does not have to speak up for him. All he has to do is be there, make sure Tallfellow sees him. Tallfellow must be enduring it all, standing stiff and straight, like an alert and angry sheep. His favourite pose. On the other hand, he might be upset, sad. Shorty is not sure. One thing he knows, Tallfellow is strong inside and won’t give in easily. Would he have dared to run away if he wasn’t?

No one is sure how it all happened.

That evening, Tallfellow was grazing the sheep near his Master’s fields. Perhaps he had gone to sleep or gone to take a shit. But for some reason he left his sheep alone for a while and they got into a neighbouring field thick with corn. The corn sheaves had been gathered, but the stalks themselves stood tall as a man’s knee and wonderfully green. The sheep had a time of it, feasting on them. All the while, Tallfellow was not to be seen. Corn stalks are not good for sheep. Sheep are known to drop down unconscious after chewing on them. This lot had eaten a fair amount of stalk, and soon they were down on their knees and drowsy. Three sheep died, of which one was pregnant. It would have borne a lamb in two weeks’ time.

When he saw what had happened, Tallfellow fled the scene. Ran down the lakebed and disappeared. The lakebed is full of bushes and thorns and hollows. Tallfellow’s Master and his men thought he might have found a hideout in one of the hollows and had decided to stay hidden, like a short-tailed fox. They figured he could not have gone very far and searched for him all night, by the light of their lanterns. From time to time, Tallfellow’s Master called out to him.

‘Dai, Tally! Dai! Come back! I won’t lay a finger on you, I promise. Come out. Don’t want you to get bitten. There are snakes in there! And scorpions. Tally! Don’t be afraid! Come out, wherever you are!’

The Master’s voice was gruff at times, at other times cajoling. But it was of no use. The fields around echoed his varying tones, but still no Tallfellow. The Master and his men then dragged the three dead sheep into a cart and drove to Karattur town, where they sold them overnight to a butcher for a throw­away price. The next day, they searched again for Tallfellow, along the lakebed and over the mudbank, all the way to Sandur in the east and Nangur in the west. Still no use. They searched for him in disused wells, for he might have taken fright at what he had done and thrown himself into one of those. A man even dived into the square of water in the lake and came up spluttering. When they could search no more, they called his grandmother in.

The old woman was distraught. The Master was unmoved. ‘I’ll search and find him. But if I don’t, you’ll have to pay up. For the sheep and also the money I’ve paid you as an advance on his salary!’

His poor grandmother did not know what to do. But the Master was determined that the boy be found. He sent his men in all four directions to ferret Tally out. Not only had three sheep died, he now had no one to graze the remaining. And he did not want to pay for another lad. Finally, after a great deal of effort, they found him.

For the two days that Tallfellow went missing, Shorty was sick with worry. Fear gripped his heart and he couldn’t swallow even a morsel of food. Tallfellow’s Master bullied Shorty as well.

‘I’m sure you know where he’s gone! You must! He couldn’t have gone without telling you! Don’t you two go to the cinema together? You must have found a place along the way to hide; come on, tell me!’

Shorty could only listen, feeling an unnamed sorrow choke his throat as question after question was piled on him.

The Master lashed at his ankle with his whip. A searing pain shot through his foot and spread all the way up his leg. Shorty stumbled and fell. Shorty’s Master intervened.

‘Leave him alone. The fellow’s been here all day. He doesn’t know a thing, I’m sure!’

The Master and his men then dragged the three dead sheep into a cart and drove to Karattur town, where they sold them overnight...

Tallfellow’s Master dropped his whip, but continued to glower at Shorty. Shorty felt both wonder and fear. He was thrilled that Tallfellow had run away, fled the fields and escaped into the big world beyond. He was confident Tallfellow would do well, wherever he went. He was at home with strangers, and would be all right even in unknown places.

They had searched for him for two days and not found him. Which meant that he was out of their reach. No more sheep-grazing for him. Other things now, nicer things.

Tallfellow would earn a lot and come back dressed in fine clothes one day. Why, he might even wear dark glasses like the great actor MGR. And then no one would know him. People might ask, ‘Who’s this?’ and look at him, screwing their eyes into narrow points. And Tallfellow would stand there, leaning against a wall, smiling. He would slowly take his glasses off, twirl them and look around him carelessly. These thoughts embarrass Shorty. But that’s what he wants Tallfellow to be—a young man in fine clothes, glasses and perhaps even a new haircut. He wanted Tall­fellow to come up to him, when he went to Amaraan Talkies next time, and put his arm around his shoulders. Shorty would look up and laugh. So would Tally. After the film finished, they would stroll away. Tallfellow would then take Shorty under his wing and show him places. Take him here and there to meet people. They might even go and visit a few girls. Tallfellow knew lots of girls and did things with them. Things Shorty could only guess at. And, of course, there were no sheep and no more grazing.