The Boy And The Wall Clock

Fifty years. Adoor. A quiet opus where, into tight frames of the ordinary, there seeps in depth, and the universal verities: time, place, power, morality. 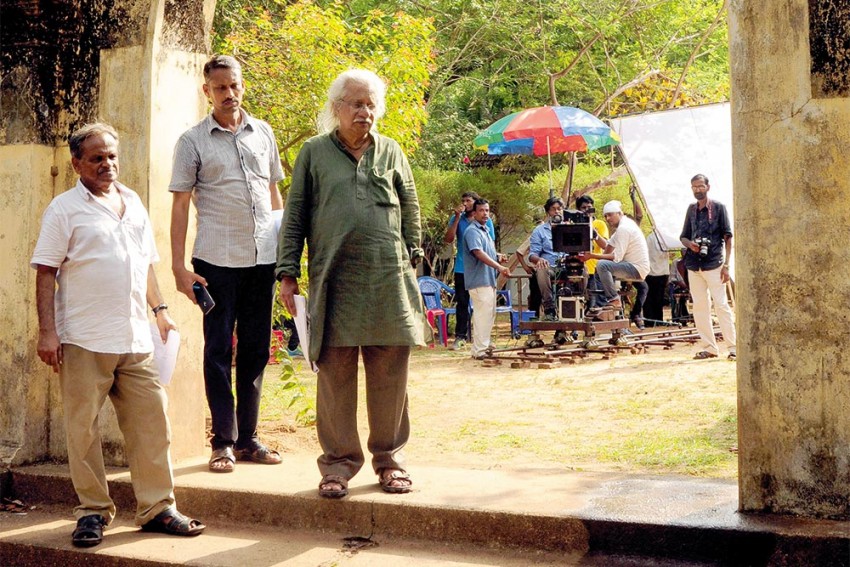 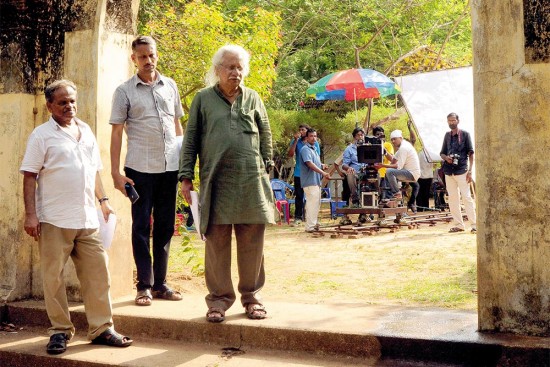 In an oeuvre spanning over four decades and counting—from Swayamvaram (1972) to Pinneyum (relea­sed last month)—one of the central themes of Adoor Gopalakrishnan’s films has been the ethical conflicts of men caught inexorably in the vortex of history and power. At the very basic level, it is a question of survi­val for them, but this struggle to live with freedom and dignity pushes them into confrontations with power structures along various axes—familial, social, communal and political. In the process, Adoor’s films map the highs and lows, the agonies and upsurges that Kerala witnessed in these decades. Turbulences that connect with and encapsulate the universal.

Though Adoor constantly experiments with different narrative formats and storytelling modes, certain elements persist in his oeuvre—the geographic terrains, thematic concerns, temporal frames and ethical anxieties that were and are rigorously consistent and dee­ply ‘local’. And it is precisely via this firm and intense rootedness in ‘local’ history, politics and culture that the dramatic conflicts and inner dilemmas in these films attain their universal app­eal. In that sense, one could describe Adoor as an excavator of Kerala’s internal histories, someone who digs layer after layer beneath the ‘radical’ and ‘progressive’ surface of Malayali life to unravel its fatal faultlines and hidden ruptures, both at the individual and social level. Adoor achieves this not only through his narrative dexterity, but most evocatively, through elaborate and accurate detailing—of characters through costu­mes, body language, slang and rendering of dialogue, of sound effects, and of mise en scene through attention to every minute element of built landscape and locale. Never is anything out of place in this world, everything has been worked out and chiselled to perfection, leaving no space for anything vague or ambiguous. It is this acute attention to detail that makes his films social documents par excellence. In his own words, “When you go in search of truth, you have necessarily to deal not with abstract not­ions and generalities, but with specifics”.

In Vidheyan, a film that deals most explicitly with power, master and slave develop symbiotic links: feeding and feeding upon each other.

During the last decades, his films have returned again and again to certain issues, themes and dilemmas that haunt our society and nation, exploring their varying significance, as they acquire different dimensions and poignancies in relation to contemporary socio-political contexts. Very few filmmakers in India have delved into the multifarious aspects of power in our society and how it works its way through the sinews of individual, social and political relationships. Vidheyan, the most explicit among his films that deal with power, explored how brute power functions in a social setup where the master and servant gradually develop symbiotic links, feeding and feeding upon the other. It’s a film that exu­des ominous resonances in the times we live in now. In Mukhamukham, it is another kind of power relationship and dependency that Adoor elaborates upon—people who, instead of taking their destiny into their own hands, obsessively seek a leader who will deliver them from all their miseries. It is a yearning that cannot do without idols and icons that are destined to fail, triggering a curious trail of self-denial on the one hand, and celebration of marty­rdom on the other. As it turns out, any such enigmatic figure of an idealist leader whom people desperately look up to for deliverance speaks more about the moral vacuum they are deeply mired in rather than the idolised man himself. Though vehem­ently criticised at the time of its release, it bec­ame a reality in Kerala two decades down the line, in the figure of the nonagenarian Communist leader V.S. Achuthanandan, who was looked up to as the saviour of the party and a harbinger of radical change. In Nizhalkutthu, one can see the ultimate power of the state—its right to kill a person—resonate at the lowest rung of the power structure; here, the exe­cutioner, destined to act as the killer. The film is about how Kaliyappan desperately attempts to redeem his humanity by weaving an alternative fictional reality. In contrast, what makes Sankarankutty in Kodiyettam an endearing character is his free-floating existence that is totally oblivious to the Establishment, of any kind. All the women in Nalu Pennungal and Oru Pennum Randaanum grapple with patriarchal power in one form or another, as it defines and encompasses family, society and state; a power machine that lords over everything, right from basic necessities like food, sex, shelter and livelihood. It is only Kunjunni (Kathapurushan) and Basheer (Mathilukal), both political activists and writers, who take on such structures and strictures of power and transcend them—they do it through introspective detachment, pol­itical conscience and artistic creativity.

The male-female duo at the centre of Adoor’s films, even while being carried away by currents of time, bears the marks of history and also its burden. Together, they take on the challenges thrust upon them by the present, trying to build a life of their own and seeking, in the process, their self, identity and freedom. They break the limits, explore new paths, but their inner and outer trajectories are not the same. While the men fret and flounder, the women are anchored to life. If one looks at Adoor’s male protagonists, one can find the crisis of masculinity deepening. Viswanathan of Swayamvaram is a lover, an aspiring writer and a struggling wage-earner who makes compromises and finally succumbs to death. His is an idealism that could not survive in that bleak period of unemployment and poverty. In Pinneyum, the figure of Purushothaman Nair looks similar: he too is educated and unemployed, struggling to find a decent job, financial security and command res­pect from his in-laws and neighbours. Here, it is not to the pressures of life he succumbs, but to greed. Irredeemably amoral, he seeks short-cuts to good life. In a chilling turn, he, along with his wife’s father and uncle, conspires to murder an innocent man to fake his own death and claim insurance. And he does this at a time when he already has a comfortable job in the Gulf. And most strikingly, never does he repent on what he has done. So, it is a huge and fatal plunge or moral fall from Viswanathan to Purushothaman Nair, through which Adoor unequivocally touches on the deep moral void at the centre of contemporary Kerala society. The only counterpoint in Pinneyum is the character of Kuttan, who vegetates as a passive witness to everything around him, physically and morally incapable of doing anything about it.

The Crisis of Masculinity

In contrast to the men, the women in Adoor’s films, tho­ugh they seldom occupy the centrestage, are strong, ethical and emotional presences. They range from the self-effacing, sacrificing prototype, like Rajamma in Elipatha­yam, Kamalam in Kodiyettam and Sreedharan’s wife in Mukhamukham, to the rebellious Sree­devi (Mukhamu­kham), the matriarchal grandmother in Kathapurushan, the tantalising figure of Suma/Nalini in Anantharam and all female characters in Nalu Pennungal and Oru Pennum Randanum. They are unwavering in their emo­tional commitments and rooted in their ethical assura­nces. Unlike the men, they are not carried away by the winds or fads of time, but stay rooted (sometimes too stubbornly), and stand firmly on their own feet, never flinching from challenges and responsibilities, or seeking easy short-cuts in life.

The array of male characters essayed in his films in many ways embodies the tangled history of masculinity in post-Ind­ependence Kerala, with all its dreams and desires, conflicts and contradictions. They are sometimes idealists and writers like Viswanathan, Kunjunni, or Sreedharan in the first half of Mukhamukham. But they are soon haunted by self-doubts and ethical dilemmas they find difficult to confront or solve. Viswanathan fails in all respects as a writer, breadwinner and husband. Kunjunni, the most idealist and courageous among the protagonists, beco­mes a recluse in the end. Athough he wins over his stammer, his work is banned by the government. Ajayan, in Anatha­ram, epitomises the deep split within Adoor’s men, where the extrovert and the introvert are at odds with each other. As in the film, they are not able to get their num­erals in a natural sequence—it is eit­her all odds or all evens, always leaving a painful vacuum in between.

Adoor’s narrative world is a psyched­e­lic mix of fact and fiction, delu­sion and real­ity...indeed, a series of conflictual dyads: desi­res/abilities, thinking/feeling, feeling/exp­eri­encing, experiencing/acting. It teems with characters torn between survival and the longing for freedom and creativity, bet­ween the addictive lures of power and forms of slavery. It’s these ever- widening chasms that tear apart his protagonists, among whom the darkest figure would be Purushothaman (literally ‘the most ideal among men’). The precipitous fall from Viswanathan of Swayamvaram to Purush­othaman Nair of Pinneyum is stark and tragic—the latter’s predi­cament staring at our times when the very idea of human substance is at risk. This is an unrepentant protagonist—a ‘normal’, educated, middle-class, middle-caste youngster, who, driven by sheer greed, conspires, kills and impersonates to achieve a ‘carefree’, unencumbered life. He, in more ways than one, symbolises a moral void that poses deeply unsettling questions to us about ‘progressive’ Kerala, ‘shining’ India, and the globalised world.

(C.S. Venkiteswaran, a film scholar and documentary maker, has co-edited the book A Door to Adoor.)

The very first moments an Adoor film lit up the screen, in the initial shot-sequences of Swayamvaram (1972), one saw the dramatic conventions of mainstream cinema being cast aside. The protagonists are on a bus. Nothing happens. The journey takes as much time as a bus ride would. The spatio-temporal unity throws the characters directly into a real world, and the maestro starts his journey into the allegorical with that gesture of everydayness.