The Book Of Hours

Vikram Seth’s new book, a form-defying marvel, is shaped out of his life’s ephemera 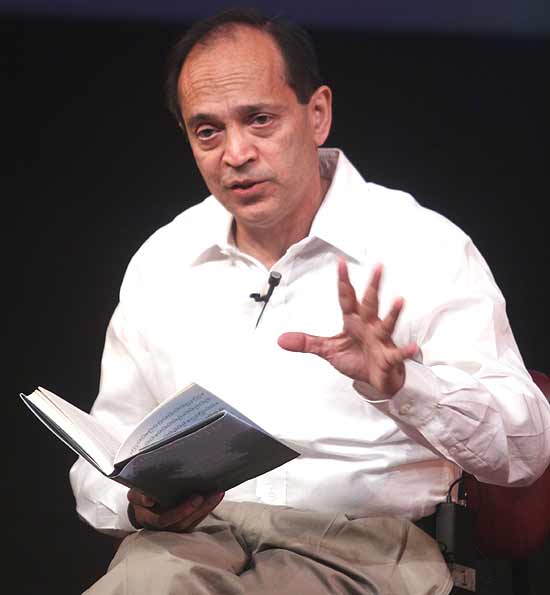 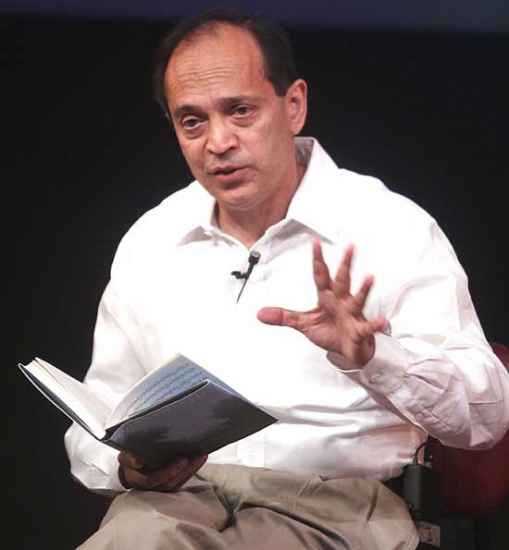 Last night a storm raged round the bare oak tree.
A cold, sharp rain fell; wild in pace
The ice-fed air swirled free.
Now in this place
I see
No trace
Of wind or lee,
No grass, no earth—the space
Is a clear lake, deep as my knee.
I reach its edge and view, far down, my face.

I wade out to the bench, set down my wine,
My bread and cheese, and like some sage
Of old, sit down to dine.
I do not rage
Or pine
At age,
For youth once mine.
This pool, this plate, this page,
This tree whose roots are branch and tine
Holds me in its still hour-glass, its free cage.

For someone who claims to be indolent, Vikram Seth can invent work on a mind-boggling scale. Six years ago, when he was ‘between books’ and ‘goofing around’ in his home in Salisbury, England, he agreed to collaborate on a festival project with two musician friends—his then partner, violinist Phillippe Honore, and composer Alec Roth. All that Seth had to do was provide the words for a 20-minute composition. But that would have been too easy and boring, so he came up with one of his ‘grand plans’: why not undertake a four-year project in which they could create a new work each year? No one had done that before, as Roth gently pointed out. But that was hardly a deterrent for someone like Vikram Seth.

The result, Confluence, was even grander than what Seth had dreamt up: four song cycles drawing from three civilisations—Chinese, European, Indian—with orchestras, choirs, violin, harp, guitar, percussion, each stretching from forty minutes to an hour, performed at three different venues in three or four festivals.

Now, nearly two years after the project wound up to critical acclaim, Seth is at it again. While he’s writing his mega novel, a sequel to A Suitable Boy, his publishers wondered, why not put the poems he composed for Confluence into a small book? What they hadn’t bargained for was Seth’s enthusiasm and passion for detail, immersing himself “mind, heart and soul” into his new book, The Rivered Earth. For Seth, there’s no such thing as a ‘minor’ book.

And it shows. Despite all the random circumstances that led to its birth, The Rivered Earth is vintage Vikram Seth—a form-defying blend of his miscellaneous passions, his unobtrusive prose, his poems and translations from Chinese, Sanskrit, Hindi poetry. It’s also part memoir, giving a rare glimpse into his intimate life: the “muse failures”; the goofing around while Roth chases him for the poems he’s supposed to be writing; the hurt vanity when Roth rejects one of his poems; the conquest of writer’s block by getting drunk; the house of the reclusive Anglican poet, George Herbert, in Salisbury, where he made a home with Phillippe Honore, the lived-in rooms, the crowded kitchen table, the oak tree outside; the break-up that left him so heart-broken that he missed that year’s performance of their joint project, the resuming of the friendship—conversations, wine, bullying Alec Roth into composing a special piece for Phillippe.... It’s an oddly beautiful book, so quietly confessional that you almost miss it, apparently random, but pulling off the different elements that went into its making with a barely perceptible mastery, personal and impersonal at the same time.

But he’s been like that—this headlong plunging into a brave new project—since his student days at Harvard. Picking up a book of poems by the eighth century Chinese poet, Wang Wei, one day from a friend’s shelf, Seth thought: “Wouldn’t it be wonderful to learn Chinese and read these poems in the original?” In anyone else, it would have been a passing thought, but Seth soon made it a reality. He cooked up a PhD thesis for himself in Chinese demography and economics, spending two years in China’s Nanjing University, pretending to be doing his research while he travelled and learnt the language. “I did it out of curiosity,” he insists now, “and not because I was trying to improve myself or trying to learn from different civilisations.”

Of course it takes effort, he admits. But “it’s like learning to ride a bicycle—it takes effort to learn how to ride it, but once you arrive at it, you’re not likely to forget it. It becomes a part of your vocabulary, or like your circle of friends, you just absorb it without thinking too much about it.”

The urge to translate his favourite Chinese poets came upon him as suddenly, he says. The brutal suppression of pro-democracy protesters on Tiananmen Square had taken place that year. “For months afterwards I could hardly bear to think of China or Chinese,” he says. “Then, to my astonishment—for I was in the middle of writing A Suitable Boy—I began to translate poems from three of my favourite Chinese poets.”

It’s his translations of Du Fu’s poems that Roth chose for the first year’s work, Songs in Time of War. The eighth century Chinese official wrote these poems during a terrible rebelIion in the Tang Dynasty which caused vast devastation and famine. It was a curiously apt choice for 2006, when the Iraq conflict was in its third year, “and the waste and grief of war gave these poems, more than 12 centuries old, a new charge.”

His urge to learn calligraphy was another “between books” project that took over his life. When he was in China, Seth says, he didn’t do much calligraphy. Then, he felt this urge to do it. He could not find a teacher, but that didn’t stop him. He began on his own, and then suddenly found this “wonderful teacher.”

It’s hard to see why a novelist-poet would waste so many valuable hours trying to master the intricate art of Chinese calligraphy. But Seth insists it’s fascinating: “Its appeal is in three ways: as words, art, and then music.” Music? “Because unlike in a painting, with calligraphy, especially Chinese calligraphy, you can tell in exactly what order each stroke was made, when the artist decided the brush was too dry, when he paused, whether he was fast or slow. You can read it through time, like you can read music. So there’s a great deal of pleasure in reading a calligraphy—you can enter the writer’s mind in time, something you can’t do in a painting.”

To Seth’s mind, nothing that he does is really a waste of time—unless of course he doesn’t enjoy it. “I take what I can from where I can, enjoy the world as it is and the culture there is in the alas! too short time that we have.” As Indians, he says, we’re particularly well-placed for this seamless blend of cultures. “We have Western, or Judaean-Christian, Hindu and Islamic civilisations. The only other very large cultural zone we have no ingress towards is East Asia. So instead of either thumping our chests or abdicating, we’d do well to realise that it’s all eventually a human journey, they’re all emanations of the human spirit.”

So, this ‘between books’ book, has it helped him to get on with his ‘real’ work—the sequel to his A Suitable Boy. Seth’s answer is prompt and terse: “No.” Not a stepping stone or getting into limber—the deadline is after all only 18 months away? He laughs: “I wish it had been, but it wasn’t.” All he can hope, he says, is that there will be no more intruders. But if his Muse should come knocking again in a different guise, he’s not the sort who can turn her away, no matter how odd she looks.