S. Ramesh is left out of the team, again. So much for fair selection! 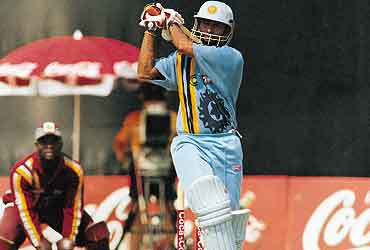 outlookindia.com
-0001-11-30T00:00:00+05:53
Inscrutable are the ways of Indian selectors. Their "unanimous" decision not to pick Sadagopan Ramesh in the Indian team for the first Test against New Zealand in Ahmedabad was as shocking as the inclusion of Yuvraj Singh was surprising. Syed Kirmani, BCCI's new chairman of the selection committee who made so much noise about "fair" and "transparent" selection, failed to give one convincing reason why Ramesh was ignored.

This when the selectors, the captain and the media have all been unanimous that finding two dependable men to open the innings in Tests is one of the crucial problems facing Indian cricket. Yet, a man who has scored 1,367 runs at 37.97, including two centuries and eight fifties in 19 Tests as an opener, has been consistently given the go-by. The quiet, unassuming southpaw from Tamil Nadu seems to be the selectors' blind spot.

Ramesh had promised a big innings for India A against the Kiwis at Rajkot. "I feel very different. I'm playing such an important match after a long time. It's a good opportunity for me to prove my worth and stake my claim again. I'd like to capitalise on it by playing a major innings," he had said on the eve of the match. He kept his word—scored 110 off 198 balls and a 164-run first-wicket stand with Akash Chopra. But the five wise men of Indian cricket were still not interested.

"I'd be lying if I say I'm not disappointed. I think I did my job to the letter, handled the speedsters and spinners with ease and scored a century to boot. What more could I have done? But this isn't the end of the world for me. I've learnt to take things in my stride. I'll keep performing. What else can I do? But I hope I'll be back sooner than later," was Ramesh's immediate reaction to his exclusion.

But he is unlikely to be recalled for the second Test in Mohali. Nor for the subsequent triangular one-day series featuring India, Australia and New Zealand. Does he fancy his chances of making it to the team for the Australian tour? "I'm not ruling myself out. I've proved my ability against some of the world's fastest bowlers and shrewdest spinners. In fact, I should start thinking I'm going to Australia. One has to be optimistic in life. You shouldn't allow negative thoughts," he says.

A string of impressive Test innings against the likes of Wasim Akram, Waqar Younis, Shoaib Akthar and Saqlain Mushtaq in the late '90s heralded Ramesh's arrival as a genuine, if maverick, opener—he had guts, gumption, courage and big-match temperament. Unfortunately, while he had been busy proving that India had at last unearthed a reliable Test opener, critics were cutting him down to size. Self-styled aesthetes said his footwork was non-existent, his technique shoddy, his shot selection absurd, that his batting lacked elegance and style.

What his detractors overlooked was his superfine timing and hand-eye coordination. Plus that he had been scoring useful runs at a time when the gods of Indian cricket were struggling to live up to their reputation. "The bottomline is performance. It's the runs that count in the end. Class is fine. So are grace and style. But what's important is the end result. Take Steve Waugh. He may not be as attractive to watch as Mark Waugh. But he has always been very effective," Ramesh says in his defence. "Would I have been able to take on the Pakistani pacers and spinners confidently and successfully if I had no technique?"

Ramesh continued to do well for India for a couple of years. Then things went wrong. He suffered a back injury that rendered him hors de combat for some time. The doubting Thomases thought it was a fake injury and triggered off an unnecessary controversy. And the selectors forgot him. He has not represented the country for more than two years now.

Will India continue to experiment with openers, and suffer, despite the presence of a proven batsman of Ramesh's calibre? Will he ever be given his rightful place in the team? Will his international career turn out to be as transient as it was dazzling to begin with? Messrs Kirmani and company owe an explanation to millions of Indians who treat cricket as a religion.