Hiuen Tsang returned to China in 647 AD. Now, we honour him. 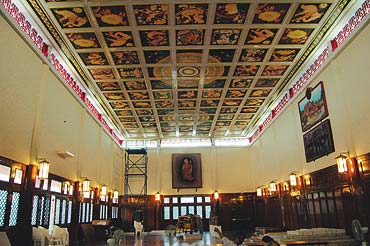 The current focus, however, is on the Hiuen Tsang temple/memorial. October is the deadline, and it's only the final touches that's left. For this, a 31-member team of craftspersons, artists and technicians will be in Nalanda from October 20. Murals from Luoyang near Xiang, Hiuen Tsang's birthplace, have been flown in and are now awaiting clearance from Calcutta customs. The Indian delegation, headed by Ravindra Pant, director of the modern Nalanda University, has almost finished the task cut out for it. "All that remains now is a huge entrance gate, courtesy the Chinese government, and a bell," notes Pant, who has been overseeing the work ever since he took over as director six years ago.

When Pant started out, the temple was a den of criminals. Buffaloes strayed into its compound, and rural folk, who knew little about the famous Buddhist monk, whiled away their time there. Believed to be haunted, the temple's walls were crumbling. Now, a mammoth, gleaming and impressive monastery-like structure—over 56 feet tall—is being readied at a breathless pace. Much of the work has been done in the last one year although China and India had agreed to build a memorial to Hiuen Tsang 50 years ago.